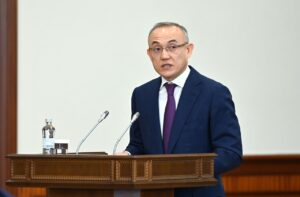 According to him, the fiscal policy of Kazakh government will increase the National Fund’s assets to $100 billion. New counter-cyclical budget rules will reduce transfers from the National Fund by 1.4 trillion tenge (US$ 2.9 billion) in 2023 and stabilize the growth rate of budget expenditures.

Assets of the National Fund and gold foreign exchange reserves

As of Dec. 1 this year, gross international reserves totaled $89.7 billion.

Gold and foreign exchange reserves for 2022 decreased by $467 million due to lower gold prices, the payment of public debt, as well as foreign exchange interventions in the first quarter of this year.

The assets of the National Fund increased to $55.8 billion due to the recovery in oil prices and, accordingly, higher revenues totaling 6 trillion tenge (US$12.7 billion), including $9.8 billion in foreign currency.

Inflation in Kazakhstan has accelerated due to the geopolitical turbulence, with annual inflation reaching 19.6 percent in November this year. The growth is mainly driven by an increase in food prices, which have increased to 24.1 percent. Non-food inflation reached 18.6 percent, with prices for paid services growing by 14.1 percent.

In 2023, however, the National Bank expects inflation to fall to 11-13 percent due to the monetary policy measures.

“In 2023, the National Bank will implement measures to give all depositors the right to transfer part of their pension savings to private companies. These measures will allow depositors to exercise their right to choose investment strategies that meet the criteria of their risk and profitability, eliminate monopolization in the market for pension asset management services and, in general, have a positive impact on the local securities market,” Pirmatov said.

According to Pirmatov, Kazakhstan may start to use the digital tenge in 2023.

“In case of a positive decision, in the fourth quarter of 2023, the industrial application of the digital tenge is proposed for social payments and public procurement scenarios,” he said.

According to him, digital tenge testing was carried out in October of this year – 3,500 transactions passed through the applications of financial market participants. More than 60 percent of Kazakhstan citizens are ready to use the digital tenge.

Addressing the meeting participants, Pirmatov said that the National Bank will continue work on expanding the services of the national payment system, modernizing the biometric identification infrastructure, and introducing Open API and Open Banking standards, which will increase the availability of financial services for citizens and businesses.

“To optimize interbank commissions, the National Bank reached an agreement with International Payment Systems on a phased reduction of domestic interchange fees nearly twofold until 2025,” he said.

Owing to the consistent government measures and the digitalization of financial services, non-cash transactions among the population have increased by 37 times over the past five years.