ASTANA – President Kassym-Jomart Tokayev’s state visit to Uzbekistan last week was under the spotlight of an international conference on Dec. 27 titled Uzbekistan and Kazakhstan. Prospects for the Development of Strategic Partnership and Alliance, reported the Kazakhstan Institute for Strategic Studies (KazISS). 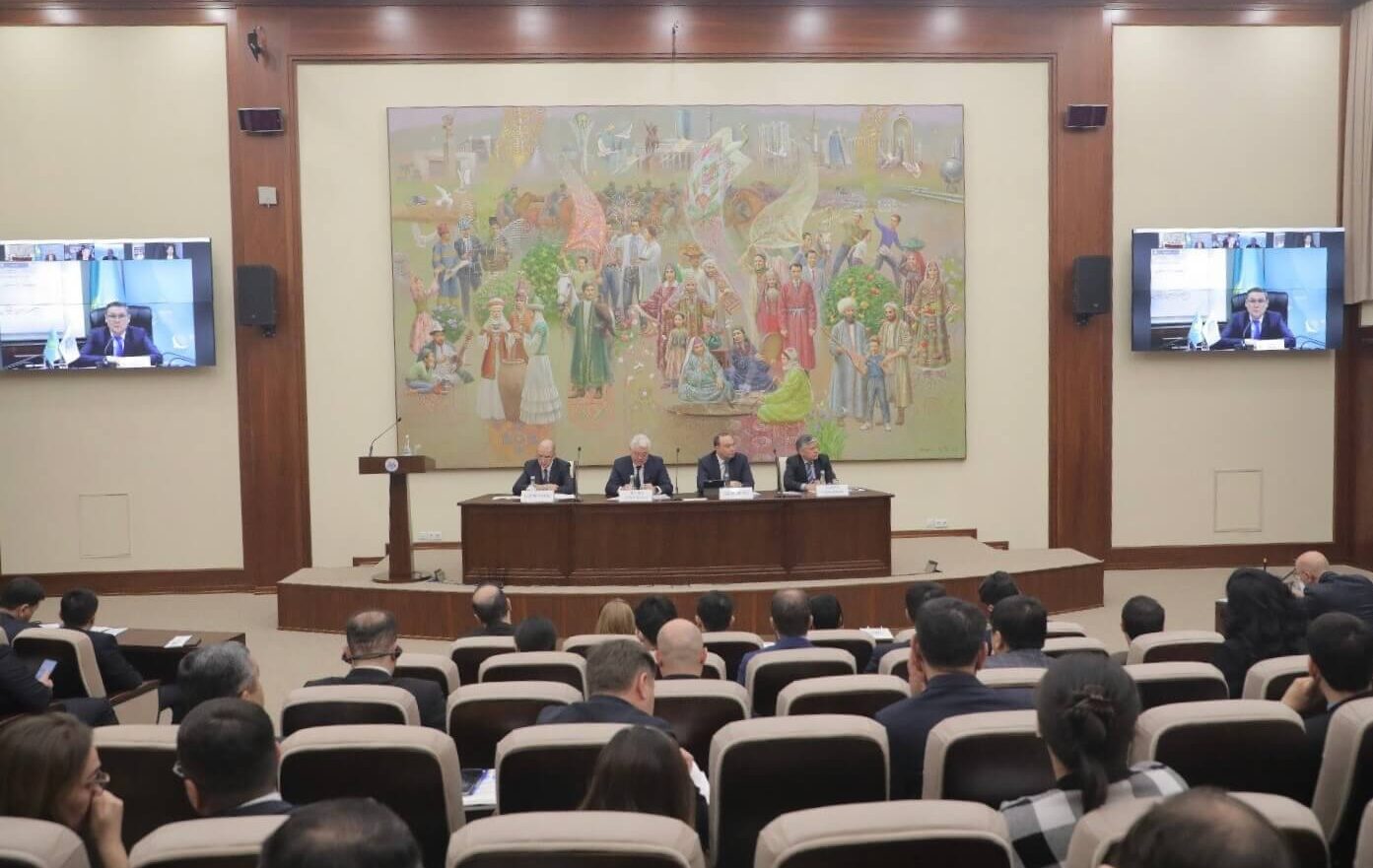 Experts discussed political dialogue and new strategic prospects for cooperation in economy, transport, energy and water resources following Tokayev’s visit to Tashkent on Dec. 21-22 and his meeting with Uzbek President Shavkat Mirziyoyev. Besides their regular meetings this year as part of the Consultative Meeting of Central Asian leaders in Cholpon-Ata and the Commonwealth of Independent States summit in Astana, Tokayev welcomed Mirziyoyev in Astana for his state visit exactly one year ago, on Dec. 6, 2021.

“The common history, culture, and geography uniting us, one way or another, causes us to build our relations in a special way, with a high level of mutual trust. The state visit of the President of Kazakhstan Kassym-Jomart Tokayev to Uzbekistan on Dec. 21-22 this year has laid the foundation for an expansion of cooperation in all sectors from the strategic perspective. It is important, taking into account that the intensity of relations between Kazakhstan and Uzbekistan in general, sets the tone for further development of cooperation of the countries of the whole Central Asian region,” said Yerkin Tukumov, political scientist and head of KazISS, one of the conference’s organizers, along with the Institute of Strategic and Regional Studies under the President of Uzbekistan and the International Institute of Central Asia. 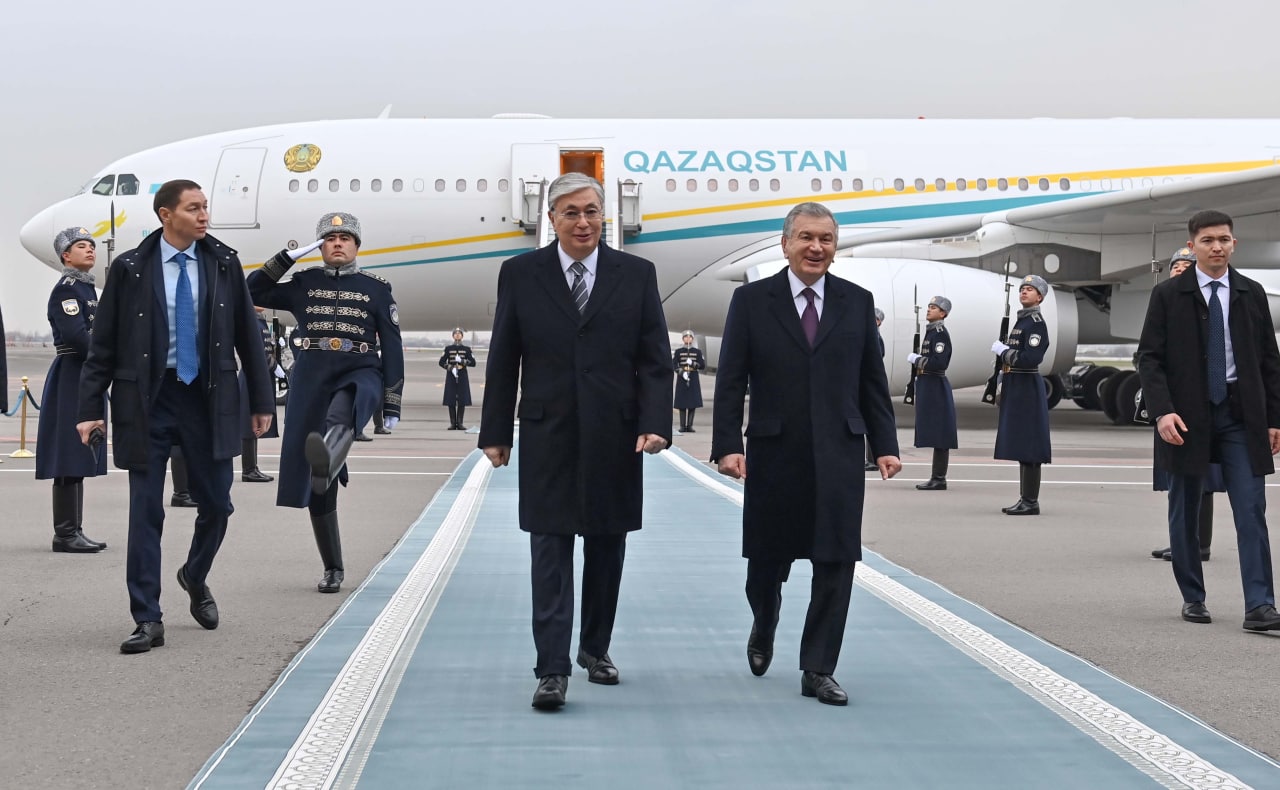 President Tokayev’s visit to Uzbekistan was significant in several ways. Talks between Tokayev and Mirziyoyev focused on increasing trade, industrial cooperation, and ties in cultural and humanitarian spheres.

“Thanks to the active political dialogue and joint work of the governments, Kazakh-Uzbek relations continue to grow and demonstrate unprecedented dynamics in all directions,” said Tokayev at a joint press briefing following the talks.

Both Tokayev and Mirziyoyev showed a steadfast commitment to growing the bilateral ties after the two signed the treaty on allied relations, the only precedent in Central Asia.

“We share a common history, cultural and spiritual values, traditions and customs. For Uzbekistan, Kazakhstan is the closest, most reliable and time-tested partner. In this difficult time, we, without exaggeration, can characterize our relations as an example of interstate cooperation,” said Mirziyoyev.

The two leaders noted that increased cooperation between the two countries is also a major factor contributing to the stability and prosperity of Central Asia. Both Tokayev and Mirziyoyev repeatedly spoke about strengthening peace in the region, promoting the idea of regional rapprochement, and facilitating the achievement of mutually acceptable solutions on regional aspects by the Central Asian states. 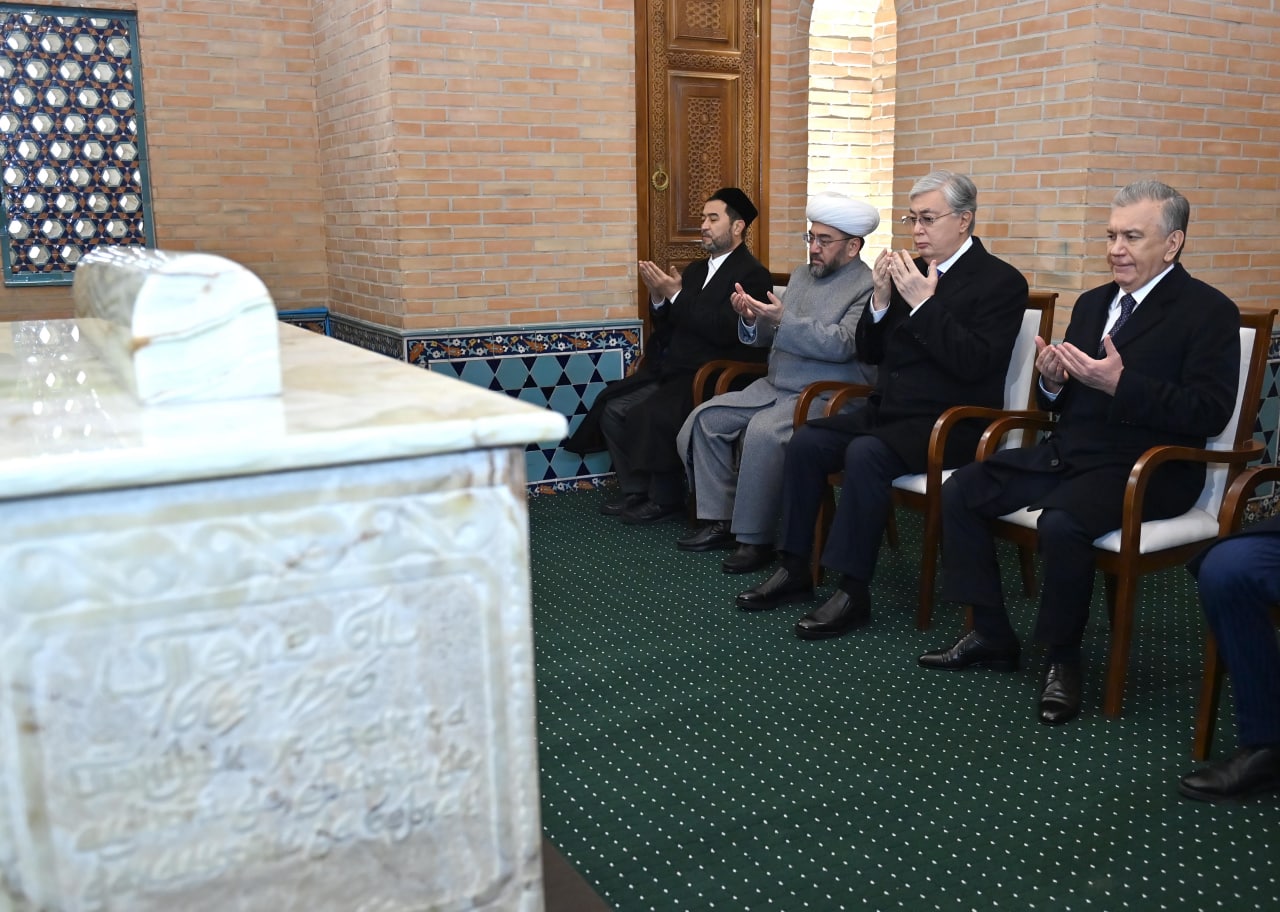 “Without any doubt, the ongoing state visit of the President of Kazakhstan Kassym-Jomart Tokayev to Uzbekistan is an event of a historical scale and will go down in the annals of bilateral relations by achieving breakthrough, in fact, unprecedented agreements that will be important for the further progressive development of relations between Uzbekistan and Kazakhstan, but also strengthening the entire architecture of security and sustainable development in Central Asia,” said Akramjon Nematov, first deputy director of the Institute for Strategic and Regional Studies.

The two countries share much more than a 2,300-kilometer border. Kazakhstan and Uzbekistan are the two largest economies in Central Asia. The data from Kazakhstan’s Bureau of National Statistics indicate a significant growth in bilateral trade over the years, from $2.1 billion in 2014 to $3.8 billion in 2021.

As of 10 months of 2022, bilateral trade went up by 35 percent, reaching $4.1 billion. Two-thirds of the turnover consists of exports of Kazakhstan’s products, which increased 36.3 percent from $2.2 to $3 billion. The two countries committed to bringing bilateral trade turnover to $5 billion and then to $10 billion. 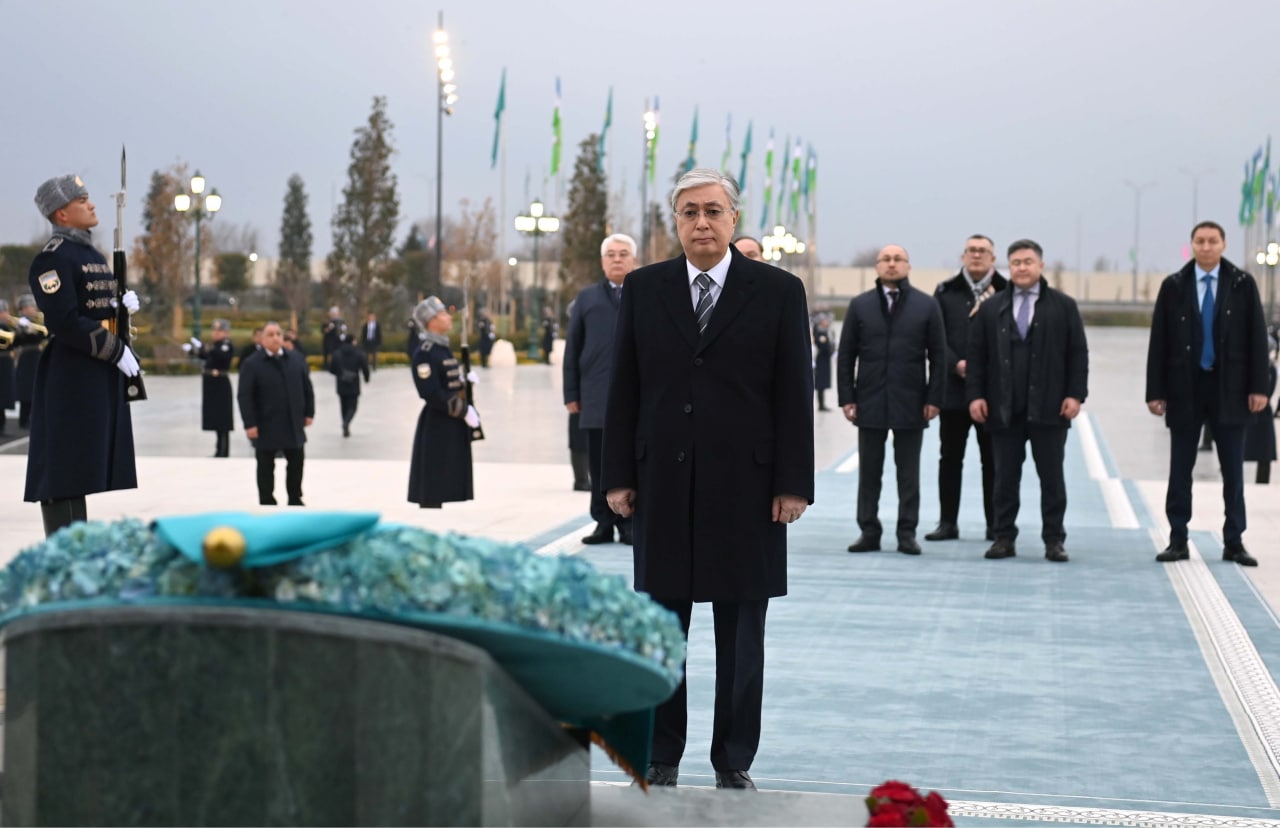 After arrival, Tokayev visited and laid flowers at the monument in the Yangi Ozbekiston park, built in 2021 to commemorate 30 years of the country’s independence. Photo credit: Akorda press service.

The plan for industrial cooperation between Kazakhstan and Uzbekistan includes more than 38 projects worth $2.2 billion, creating nearly 11,000 jobs. Ten joint projects have been implemented, and half are in Kazakhstan.

“Trade and economic interaction between the two countries is intensifying. The economies of Kazakhstan and Uzbekistan have mutual potential due to their geographical location. (…) The economies of Kazakhstan and Uzbekistan are complementary and practically do not compete with each other. It is necessary to strengthen cooperation in the transport and logistics, water and energy sectors, mechanical engineering, tourism and environmental protection,” said Uzbek economist Zakir Usmanov in a 2021 interview with the Central Asian Analytical Network.

More than 1,400 enterprises with the participation of Uzbek capital work in Kazakhstan and more than 400 joint Kazakh-Uzbek companies. 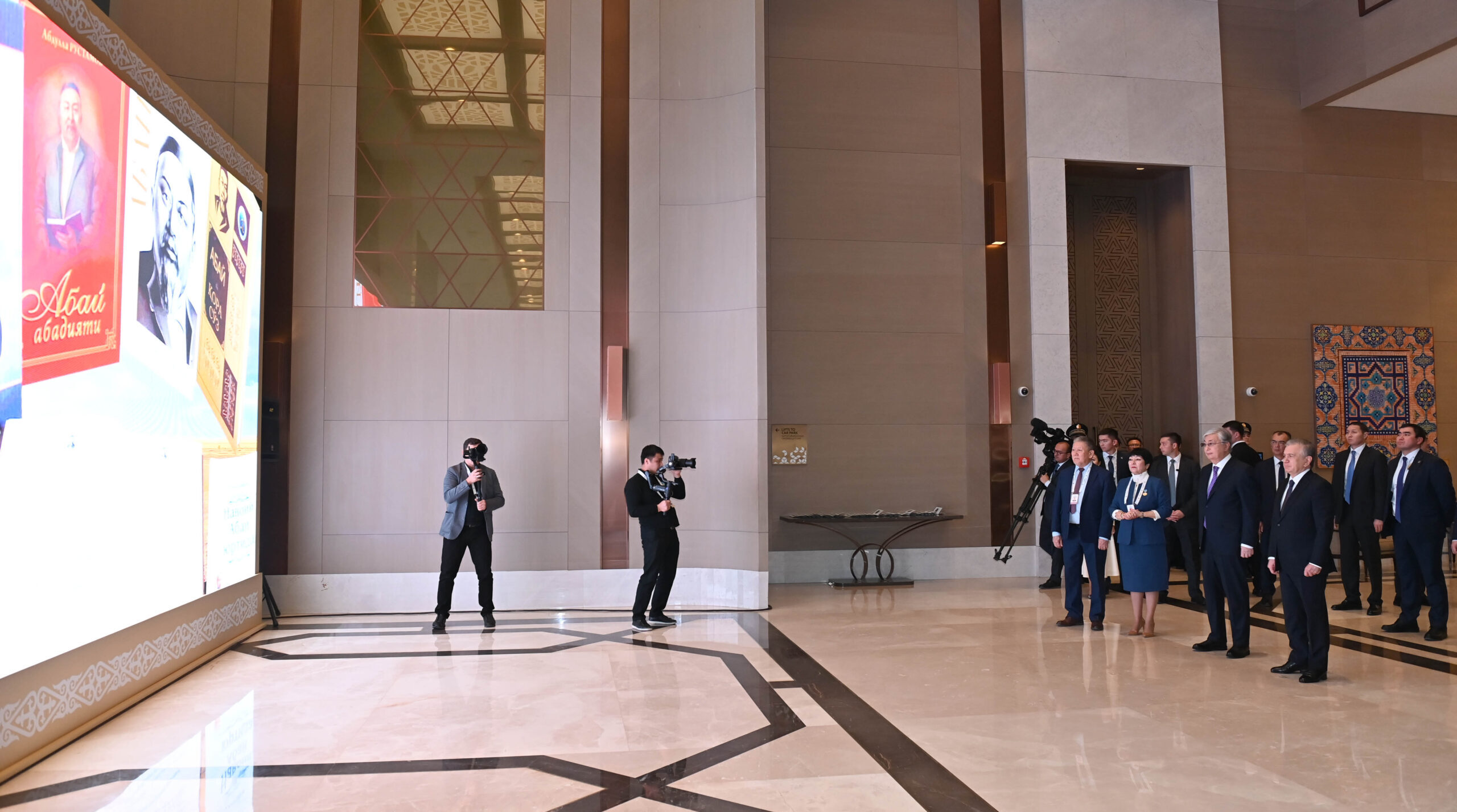 “Given the small size of each country’s economy separately, I believe the Central Asian region should act as a united front in attracting international capital. For this purpose, Kazakhstan has already created all the necessary infrastructure, which includes the Astana International Financial Center and its investment preferences. We are ready to act as a gateway for investors to our region,” said Zhumangarin, inviting Uzbek companies to Kazakhstan.

Besides the treaty on allied relations and the agreement on border demarcation, the visit also featured agreements on major industrial projects and the launch of industrial facilities by Tokayev and Mirziyoyev.

Tokayev highlighted the potential for joint agricultural projects, including meat production, processing and packing of fruits and vegetables, and cultivation of oil crops, wheat and potatoes.  In nine months of 2022, the trade turnover of agricultural products increased by 30 percent, exceeding $1 billion.

“Particular importance is attached to the joint efforts to create high-tech productions based on our comparative advantages, the development of industrial cooperation for producing products with high added value to further jointly conquer international markets. We have enormous potential for multiplying mutually beneficial projects. For this, we already have everything necessary – production, technology, personnel and natural resources,” said Khodjaev.

Central Asia International Center for Industrial Cooperation is among the key projects between Kazakhstan and Uzbekistan launched during the visit.

“An important step on the way of industrial cooperation and creation of a joint product for exports to third countries’ markets is the accelerated implementation of the Central Asia International Center for Industrial Cooperation on the border of Kazakhstan and Uzbekistan. The center will become an example of effective industrial cooperation and a key platform for actively developing the North-South Central Asian economic corridor,” said Zhumangarin, addressing the forum.