Kazakhstan to Further Reduce State’s Stake in Economy by 2025

By Staff Report in Business on 7 December 2022

ASTANA – The implementation of a large-scale privatization plan will reduce the share of state participation in the economy down to 14 percent by 2025, said Kazakh Prime Minister Alikhan Smailov at a Dec. 6 government meeting, reported the Prime Minister’s press service. 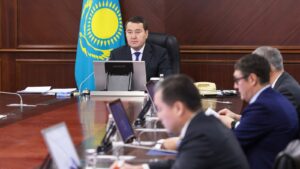 Today, the privatization list includes 675 facilities in the public and quasi-public sectors, including the shares of 262 national companies that are part of holdings such as the Samruk Kazyna Sovereign Wealth Fund, KazMunayGas, and Kazakhstan Temir Zholy.

According to Minister of National Economy Alibek Kuantyrov, the plan excludes 200 critical social life support systems such as water, power, and heat facilities. These objects will remain under state ownership.