By Galiya Khassenkhanova in Central Asia, Editor’s Picks on 1 December 2022

ASTANA – Kazakhstan is a leader in gender equality progress among the Central Asian states, United Nations (UN) Women National Consultant Madina Jarbussynova told The Astana Times. She shared the progress Kazakhstan has made to promote gender equality and women’s empowerment. 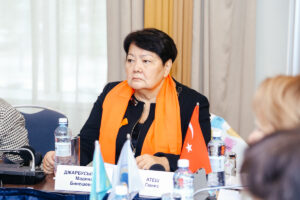 “All Central Asian countries face similar problems in the field of gender equality and there is a need to deepen processes of removing obstacles to the full involvement of women in the economic, social and political spheres of development of their states,” said Jarbussynova, who has long been engaged in promoting gender equality.

Working at the Kazakh Ministry of Foreign Affairs, she coordinated preparations for the Beijing World Conference on Women: Action for Equality, Development and Peace in 1995, and was a member of the National Commission for Women and Family Affairs under the President for many years.

During Kazakhstan’s chairmanship in the Organization for Security and Co-operation in Europe (OSCE), she was the one to propose the position of the Special Representative of the OSCE Chairperson-in-Office on Gender Equality, which was established in 2010.

As the OSCE Special Representative and Coordinator for Combating Human Trafficking from 2014 to 2018, she was involved in the protection of the rights, as well as rehabilitation and integration of female victims of human traffickers in the OSCE area of 47 states.

Commenting on the most common problems in all five Central Asian states, Jarbussynova named the low level of women’s participation in political life, their insignificant representation at the decision-making level, economic problems caused by the pay gap between women and men, high involvement of women in unpaid care work and unequal access to resources.

Kazakhstan, however, made significant improvements. Occupying the 65th position among 146 countries in the Global Gender Gap Index 2022, the country managed to jump from the 80th position in just one year.

“Demonstrating commitment to the promotion of gender equality and closely interacting with the international community, Kazakhstan has developed a political and legal framework – guarantees of rights, legal norms, national strategies, plans and action programs to promote gender equality as a national goal,” Jarbussynova said.

The consultant noted that the legal and political framework in force in the country creates favorable conditions for further empowerment of women and for ensuring gender equality, allowing her to assert that Kazakhstan is a regional leader in this area.

She highlighted that much still has to be done. The adopted policies and laws should be respected locally, efforts to ensure gender equality in political and socio-economical spheres should continue, and zero tolerance for sexual and domestic violence should become the norm.

The country needs to pay more attention to the education of young people and strengthen awareness-raising campaigns to address gender biases and stereotypes.

“I am a supporter of the widely expressed by civil society representatives and experts’ point of view that the national mechanism of gender policy in the country should be strengthened. The National Commission for Women’s Affairs is an advisory body. Despite its expertise and political will, its human and financial resources are insufficient to meet all the needs and effectively implement all necessary initiatives for gender equality and women empowerment,” said the expert.

Jarbussynova likewise mentioned Kazakhstan’s accession to two of six Action Coalitions on the Generation Equality Forums last year, which are dedicated to finding new mechanisms to achieve the goals of gender equality.

To achieve the goals of the Action Coalitions, Kazakhstan made five commitments, including conducting a nationwide survey on the prevalence of gender-based violence, which the Kazakh Bureau for National Statistics has carried out and the results of which will be published in 2023.

Another commitment is to establishing a Regional Knowledge Platform in Central Asia to share best practices on gender equality and preventing violence against women and girls. The Act for Equal virtual community will soon be launched to implement this commitment and Jarbussynova is the coordinator of this project.

Kazakhstan allocated $70,000 this year for the Spotlight Initiative Regional Program for Central Asia and Afghanistan, a joint European Union and UN initiative to eliminate all forms of violence against women and girls.

The country made progress in two other commitments by establishing resource centers to support women entrepreneurs in all regions, which have conducted more than 17,000 consultations and supported 10,000 business projects, and eliminating the list of professions that women were prohibited from entering in October of last year.

“I am confident that Kazakhstan has all prerequisites and conditions to achieve the high goals of gender equality, empowering women and providing them with equal rights and opportunities to ensure that no one is left behind. It is also important that there is a political will for this,” she said.