By Staff Report in International on 14 December 2022 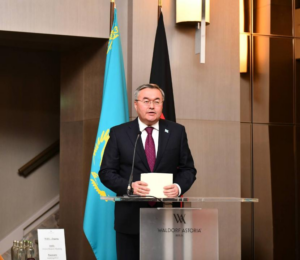 “Platforms such as the Berlin Eurasian Club are crucial in coordinating our actions at a time of unprecedented turbulence and uncertainty,” said Tileuberdi.

At a panel discussion, the participants agreed to enhance cooperation in overcoming obstacles in developing trade and economic ties. They also discussed the possibilities of expanding cooperation through the implementation of existing agreements and bilateral projects.

Tileuberdi also met with Minister of State at the German Federal Foreign Office Tobias Lindner to discuss the bilateral and multilateral partnership. The parties noted the growth dynamics in trade and reiterated their intent to expand cooperation in renewable energy sources, transport and logistics, mining and processing of minerals and other spheres of the economy. The Kazakh minister also discussed the implementation of joint projects with heads of such German companies as Multivac, EMAG and Reimann.