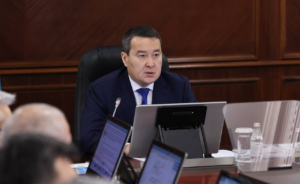 “The government will focus on building a new state policy based on three interrelated principles of Just State – Just Economy – Just Society. I, as the Prime Minister, will do my best to achieve the goals set by the President. Every member of the government is expected to work hard so that every person would see the result,” Smailov said.

According to him, the National Headquarters for implementing the program has already been established and it includes heads of all central and local executive bodies.

“Each minister must guarantee 100 percent fulfillment of tasks in his area. And each akim (mayor) is to provide a high-quality solution to socio-economic issues in his region,” the PM stressed.

The measures include increasing the population’s incomes, subsidizing interest rates within the Economy of Simple Things program, decreasing volumes of consumer lending, working out a project for developing rural areas, scaling the police service model, returning certain mineral deposits to public ownership and creating a map of returned agricultural lands.

Smailov also emphasized the need to improve the speed of responding to emergency situations, alluding to the recent disruption in the work of Ekibastuz power plant that left the town without heat for more than a week in -30 degrees Celcius weather. In this regard, the government will also carry out a comprehensive inspection of all power plants in the country and consider ways to allow for their modernization.