By Aida Haidar in Central Asia, Society on 24 December 2022

ASTANA – The book “The Eagle Huntress: The True Story of the Girl Who Soared Beyond Expectations” was presented at the first Central Asian Media Forum on Dec. 21. 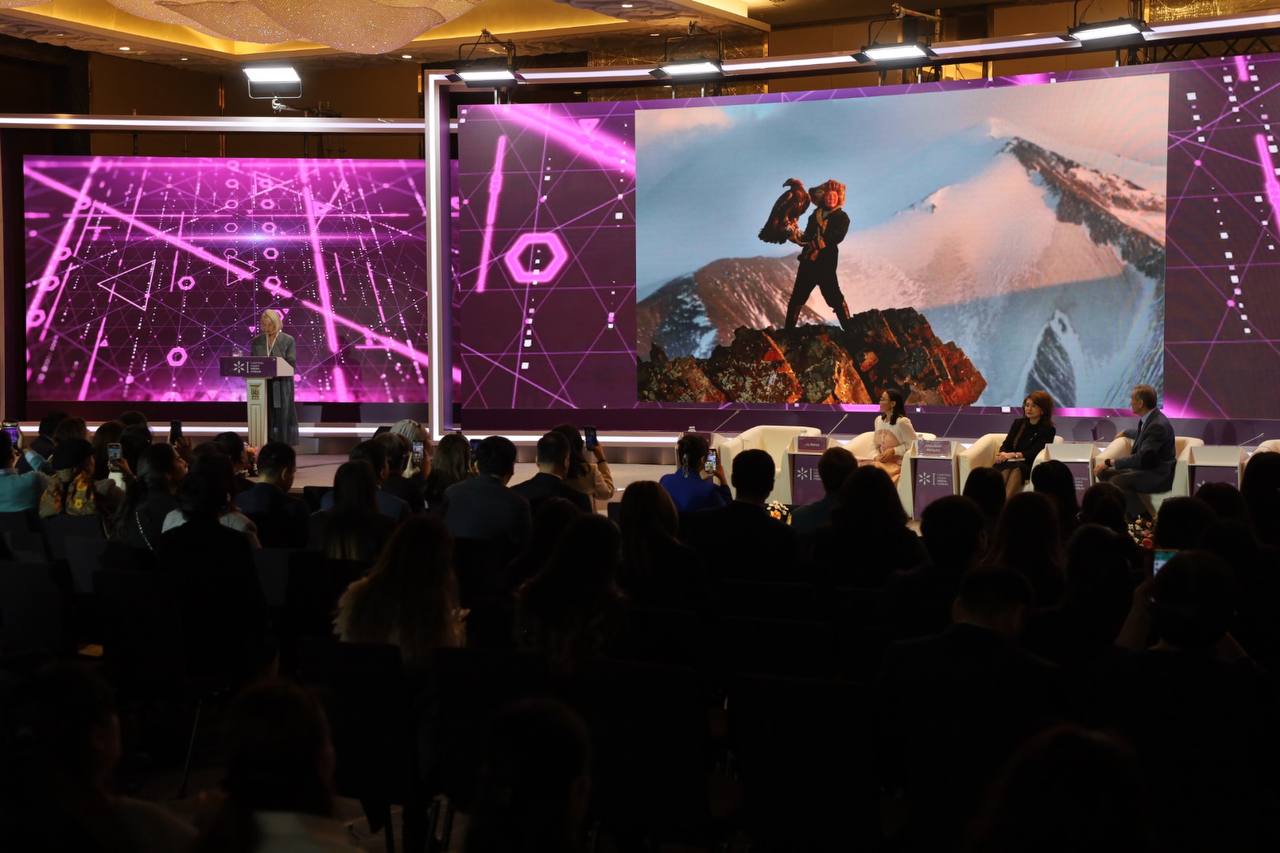 Liz Welch says the photo of Aisholpan with an eagle in her arm epitomized the idea of girl power. Photo credit: Ministry of Information and Social Development

Millions of people worldwide were taken aback when they first saw a striking photograph of a 13-year-old girl with a strong and majestic eagle on her arm. The photo, taken by Asher Svidensky, set in motion a chain of events that transformed the life of a humble nomadic Kazakh girl Aisholpan Nurgaip from Ulgii, Mongolia.

Liz Welch, a New York Times bestselling author, first discovered the magnificent photo online. It went viral, according to Welch, because it epitomized the idea of ‘girl power.’

Historically, Aisholpan’s family, like many other Kazakh families, reserved such an enchanting and ancient tradition for passing down from father to son. Aisholpan’s father, Agylai Nurgaip, recognized her talent and decided to teach her all the intricacies of eagle hunting. Her inherent aptitude, having grown up with her father’s eagle as a playmate, and a strong desire to follow in the footsteps of her brother, father, and grandfather were game changers. 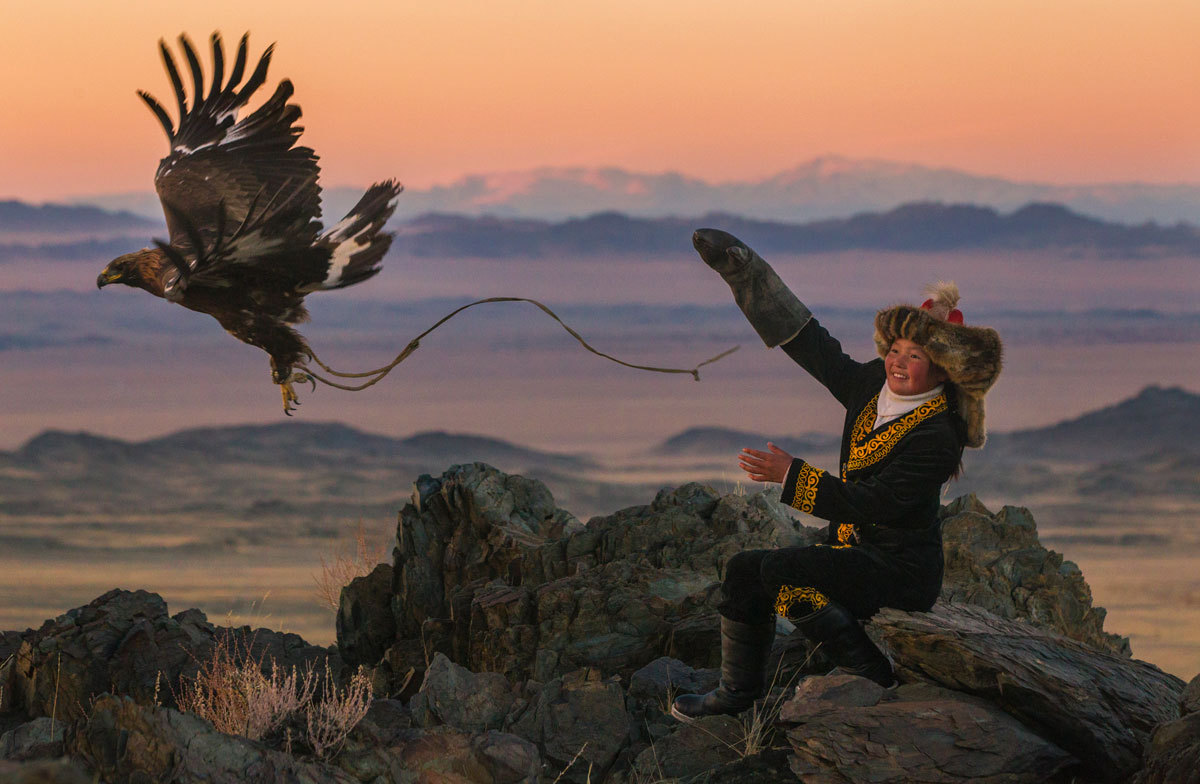 Then came the award-winning filmmaker Otto Bell’s documentary “The Eagle Huntress,” which showed Aisholpan’s path to triumph in her first-ever eagle hunting contest at the Golden Eagle Festival. Sometime later, Bell felt Aisholpan needed to tell her own story in her own words, which is when Welch entered the picture. She said, “a book is another powerful media form.”

“I had written five books by then, including with Malaila Yousafsai. I understood the inherent power of young women challenging the status quo and what incredible things can happen. I also understood how powerful it is to share these stories with the world,” Welch said.

Otto Bell and Liz Welch traveled to Mongolia to learn about this beautiful tradition because of the power of one photograph. It motivated many other girls to follow in Aisholpan’s footsteps. The Golden Eagle Festival attracted other girls who wished to try their hand at being eagle hunters. Welch spoke with them, and they told her that Aishoplan was the reason they were competing.

“It was thrilling to these girls, all Aisholpan’s age, to see her life celebrated in this way, breaking from the gender roles, uplifting the Kazakh culture and history nonetheless. When I asked what they liked most about Aisholpan’s story, one girl said she proved to the world the girls could do anything they put their minds to,” Welch continued.

The book sparked many gender-related conversations and motivated many young girls beyond Mongolia and Kazakhstan. 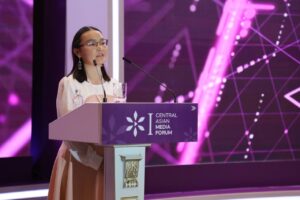 According to Welch, one of the most fundamental discoveries she made throughout her research was that Aisholpan was not the first female eagle huntress. There have been several in the past, notably Makpal Abdrazakova, who won the tournament in Kazakhstan in 2009, long before Aisholpan decided to test her skills at the Golden Eagle Festival.

“That is why this forum is so valuable, so we may share other stories of women who have done incredible things that no one knows about. The power of the media is in conveying and documenting these histories,” Welch said.

Aisholpan, who also attended the presentation, now in her twenties, is a delicate but strong young woman. She is studying to be a teacher and says her dream of visiting Kazakhstan has come true. The famous photo, documentary, and now the book took Aisholpan to nearly 30 countries worldwide, where while learning about different cultures and traditions, she strived to showcase Kazakh traditions and nomadic lifestyle.

“I am delighted to meet you all. I want to thank the Kazakh people and my parents for all the support they show me every day. I promise to continue popularizing our rich heritage in the future,” Aisholpan concluded.

She also shared that she feels humble that her story has inspired so many filmmakers, authors, and musicians, including Grammy-winning songwriter Sia, who dedicated her song “Angels by the Wings” to Aisholpan’s story.

Former president of Mongolia Nambaryn Enkhbayar, who attended the presentation, stated that Aisholpan is not only an excellent representative of Mongolia but also of Kazakhstan. She is a person who demonstrates that girls can accomplish anything and she brings two fraternal nations closer together.