By Zhanna Shayakhmetova in International on 14 November 2022

ASTANA – The ongoing reforms in Kazakhstan give the partnership between the European Union (EU) and Kazakhstan room to grow in all areas of cooperation, Klemen Groselj, a Member of the European Parliament and its standing rapporteur on Kazakhstan, said in a recent interview with The Astana Times. 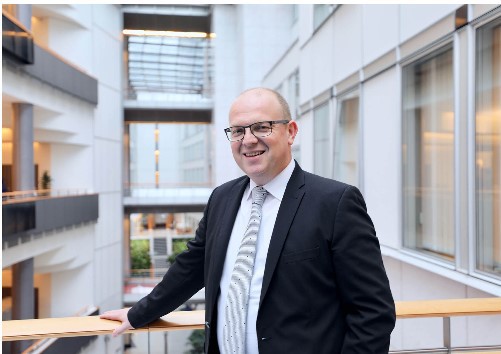 “I am confident that the EU can help and support Kazakhstan with the necessary expertise and know-how, but at the same time, Kazakhstan can help us with its knowledge and experience to better understand Central Asia and the Caspian region. So, there is a concrete and genuine mutual space for cooperation. Now it is upon all of us to turn this into a success story,” Groselj said.

Slovenian politician Groselj has been serving in the European Parliament since 2019.

“As a researcher at the Faculty of Ljubljana, I did a lot of work on modern peacekeeping and military missions, and in this framework I did some work on Commonwealth of Independent States (CIS) operations in the area of the former Soviet Union,” Groselj explained his interest in Central Asia. “This brought me also to the area of Central Asia, especially Tajikistan, but also other countries which used to be part of CIS. Later on, I was also engaged in the energy field, especially as regards the Caspian basin, and in this framework, I got closer to Kazakhstan as an important energy actor in the global arena.”

Regarding the dramatic changes in Kazakhstan in 2022 that began with a major upheaval in January and have by now included a far-reaching constitutional reform and an early presidential election set for Nov. 20, Groselj believes the reform path is the only possible way to bring long-term prosperity, stability, and internationally recognized rights and freedoms to the people of Kazakhstan.

“As a parliamentarian, I would call for even more ambitious and fast reforms, but I do know that this sort of changes usually do take some time. Despite the progress, there is still a long way ahead, and the country is faced with challenging and deep reforms, especially in the field of human rights and citizens’ rights, law enforcement, fight against corruption and organized crime, judiciary, and many other social related reforms,” he said.

Traditionally, the European Parliament prepares and adopts a report on cooperation with the Kazakh Parliament and government. The information serves as one of the mechanisms of the dialogue as well as regular bilateral contacts at the EU level and at the individual member states’ level.

An open platform for exchanging views among different governmental and non-government representatives may be helpful for both sides, noted Groselj.

“An informal platform between the EP and Kazakhstan or even between the EU institutions and Kazakhstan is necessary. I think this type of informal exchange would contribute to strengthening relations and could help Kazakhstan on its reform path. It would also allow better mutual understanding on different issues of common interest,” he added.

Education is also integral to the EU-Kazakhstan cooperation as Kazakhstan joined the Bologna declaration regarding higher education policy reforms back in 2010 becoming the first Central Asian state to be recognized as a full member of the European Educational Area.

“Young people represent the future and I think we should strengthen our bilateral cooperation in this field. I think it is a matter of urgency for the EU to establish a common gateway for young people to study in the EU without being forced to face a huge amount of red tape and bureaucratic obstacles. This is, by all means, an area where much can be done in a relatively short period of time,” said Groselj.

Kazakhstan and the European Union established diplomatic relations on Feb.2, 1993. The key legal arrangement for them is the Enhanced Partnership and Cooperation Agreement signed in 2015, the first of its kind for a Central Asian country. It covers 29 areas of cooperation and is in full force since March 2020.

The regular dialogue mechanisms include annual meetings of the Cooperation Council at the levels of the ministers of foreign affairs of Kazakhstan and a country currently holding the EU presidency, with political and trade committees, as well as three subcommittes on justice, home affairs, and human rights; on energy, transport, environment, and climate change; and on customs affairs. The Kazakh Parliament’s cooperation with the European Parliament is carried out within the framework of the Kazakhstan – EU Parliamentary Cooperation Committee with the participation of the EP’s official delegation in charge of Central Asia (DCAS).

With a trade turnover of $26.3 billion in the first eight months of 2022, a growth of 43 percent compared to the same period a year ago, the EU, as a bloc, is the largest trade partner for Kazakhstan, accounting for almost half of its trade, and with more than $160 billion since 1991 has long been the largest source of foreign direct investments in the Central Asian nation’s economy.

EU Council President Charles Michel paid an official visit to Astana on Oct. 26-27 where he held talks with Kazakh President Kassym-Jomart Tokayev. The two leaders issued a joint press statement and oversaw the signing of a $50-billion-worth contract on cooperation between Kazakh and European companies on the production of green hydrogen in West Kazakhstan with the EU viewed as its major market. On Nov. 7, European Commission’s President Ursula von der Leyen signed a Memorandum of Understanding with Kazakhstan’s Prime Minister Alikhan Smailov on the development of a secure and sustainable supply of raw materials and refined materials, renewable hydrogen and battery value chains, to boost the green and digital transformation of both sides’ economies.