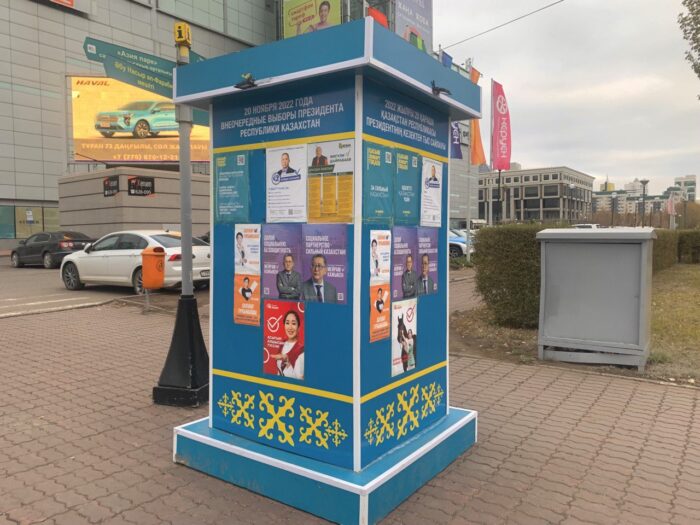 With the election rules giving all six candidates an equal chance to be heard by voters, the candidates put up election posters, use social media and engage in public discussions.

Abden has sought to increase her standing with the Semei public and took a ride on public transport on Oct. 29 to “get to know the conditions of ordinary people.”

“After all, public transport is used by both the young and the old,” she said. “I spoke with pensioners and presented my proposals in my election program to reduce the retirement age for women and increase benefits for older people.” 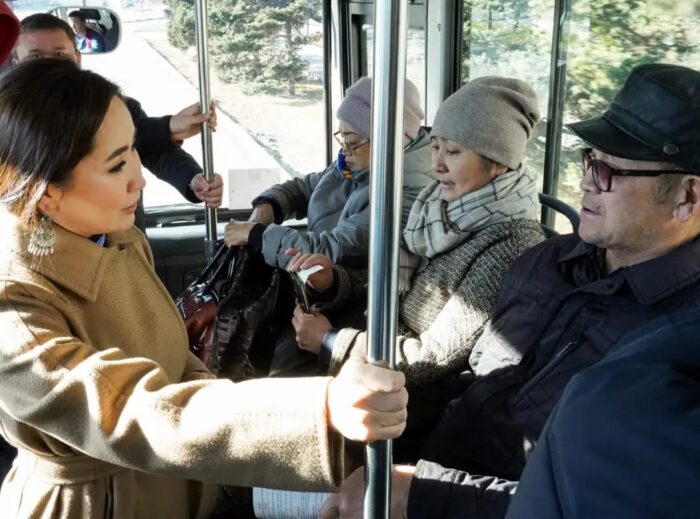 Abden took a ride on public transport on Oct. 29 to “get to know the conditions of ordinary people.” Photo credit: Abden’s Facebook.

As an advocate for strong national values and traditions, she spoke about her campaign values to entrepreneurs on Oct. 31 when she visited the milk processing family shop of Saiypjamal Otep, a resident of Tuzdybastau village in the Almaty Region. According to her, small and medium-sized enterprises (SMEs) are a driving force of the country’s economy.

“Today, the generational business is one of the most effective tools for strengthening family values. (…) This family is a vivid example of generational continuity, where national values and traditions have formed the basis of the family business,” wrote Abden on her Facebook page.

Later in the day, she visited Esik village, where she met with preschool teachers. Her campaign offers to provide preschool education for every child, including the launch of a round-the-clock kindergarten.

During her meeting with businesswomen in Aktobe on Nov. 2, Abden spoke about her campaign strategy aimed at supporting women at the state level. “As a mother of many children, I believe that a woman-mother, a Kazakh girl should become a mirror of the nation,” she said.

On Nov. 1 Auesbayev met with the public in the Kazygurt district in Shymkent. He called it a “very exciting moment,” as it was the day when at the start of his career, he created the first local self-governance structure supported by the public to deal with infrastructure issues. 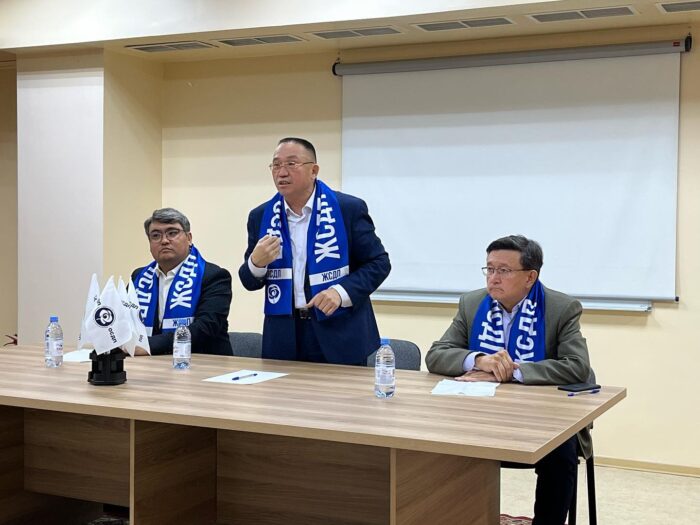 Auesbayev met with the voters in Almaty on Nov. 3. Photo credit: Auesbayev’s Facebook.

Water pipelines have been installed in the district since then and roads have been built with “not a single tenge from the budget.”

“I was happy to realize today that my services were not forgotten. The lecture hall at a school where I spoke was full,” wrote Auesbayev on Facebook.

Auesbayev is committed to combating corruption and establishing a Just Kazakhstan through effective political and economic reforms, he said at the meeting with the National Social-Democratic Party representatives in Shymkent on Nov. 2.

“Once again, I was convinced that people have a huge demand for justice. And it is not just about fair jurisdiction. Justice should be in everything: in the economy, in social policy, in access to social elevators,” said Auesbayev at the meeting.

The next day, Auesbayev met with the voters in Almaty. He highlighted the importance of political reforms. “The first task is political reforms. Without this, it will not be possible to develop the economy. That is why I advocate for the creation of a strong parliament, 50 percent of which will be composed of self-nominated candidates elected in single-member districts,” said Auesbayev.

Over the course of the last week, Dairabayev, whose platform gives much attention to rural areas and agriculture, visited Aralsk in the Kyzylorda Region as well as the Aktobe, Karagandy and Pavlodar regions. 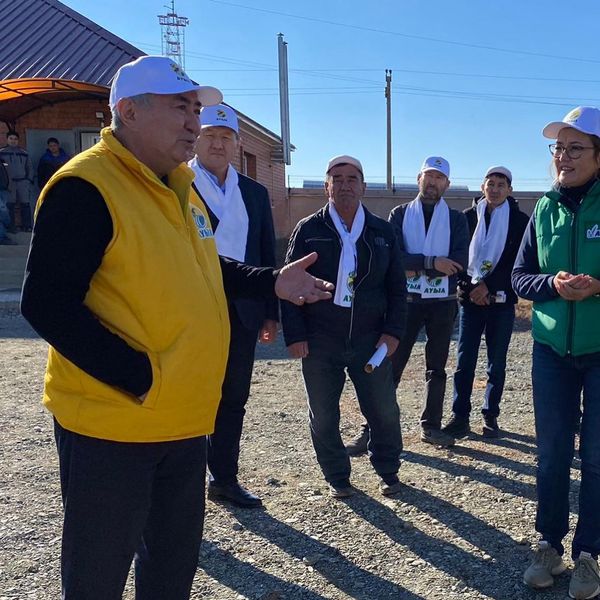 Dairabayev met with the plant workers in the Karagandy Region. Photo credit: auyl.kz

Aralsk, where Dairabayev traveled on Oct. 28, faces an array of problems including the poor environmental situation, scarcity of drinking water and lack of social benefits for the people. He promised to increase salaries, pensions, social benefits and scholarships by 50 percent for those who live in areas affected by environmental crises and lower the retirement age for the residents of these regions by at least five years.

During the meeting with Aktobe Agricultural College students on Oct. 29, he said that “the creation of an agrarian power will require the formation of new, educated young people who are ready to work in the regions and create new types of agribusiness.”

In the Karagandy Region, Dairabayev met with the workers of a phytochemistry herbal medicines plant on Nov. 1 and visited the market in Ekibastuz on Nov. 2.

The candidate is convinced of the need to increase the production capacity of domestic plants and grow crops in the volumes eligible for export.

He stressed the importance of coordinating the agrarian policy of the state. “The state must do everything to encourage farmers to increase the volume and quality of production. To do this, it is necessary to change the system of agricultural subsidies,” said Dairabayev. 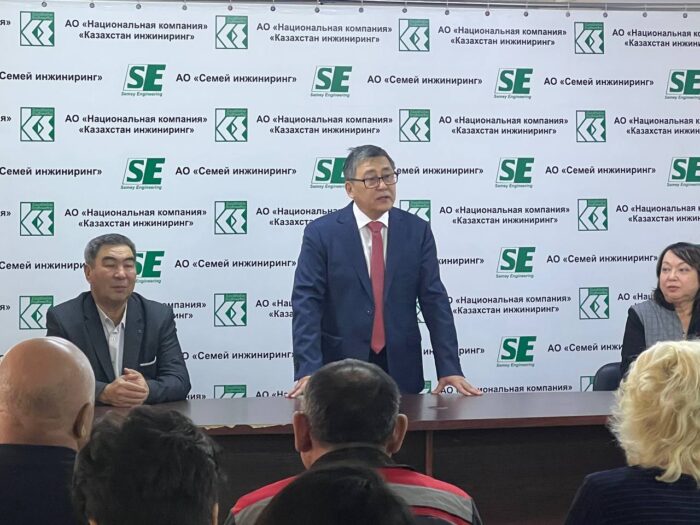 On Nov. 1, Kazhyken visited the Semei engineering plant. His message to the voters was that the government should create conditions and opportunities for each citizen to fulfill their potential.

“The citizen must participate in the processes that can change the conditions of their lives through social partnership, namely trade unions, business associations and civil society institutions,” he said.

When asked about how he plans to fight corruption, he replied “harshly.” He made it clear that he would not tolerate any corruption “even if it is friends among the corrupt.”

Later in the day, Kazhyken visited Semei Medical University. He said that higher education in the country should be modernized so that universities could form the “intellectual potential of the country” in accordance with market needs.

“We need to recalculate the cost of the food basket so that it includes communal services, sweets for children, buying books, and going to the theater at least once a month,” said the candidate.

Kazhyken also promised to increase spending on healthcare during his meeting with medical workers in Ust-Kamenogorsk on Nov. 2.

“In developed countries financing on medicine reaches six percent of the gross domestic product (GDP), but in our country, it is 1.5 percent, which is four times lower,” he said.

On Oct. 28, Tokayev’s election headquarters visited the Ulytau Region. At Zhezkazgan city’s House of Friendship, which gathered around 500 people, the head of the election headquarters Yerlan Koshanov announced that more than 111 million square meters of housing will be put into service in the next seven years. Koshanov met with the business community, miners and students in the Karagandy Region on Oct 31. Photo credit: Toqaev2022 Telegram

Koshanov also held meetings with the business community, miners and students in the Karagandy Region on Oct 31, where he focused on support for SMEs.

“By 2025, the state’s presence in the economy will be 14 percent and the number of people employed in SMEs will increase to 4.7 million people. The Tax Code and the law on public procurement will be revised to meet business needs,” said Koshanov.

At the meeting with the public in Otegen Batyr village in the Almaty Region on Nov. 2, Koshanov said no less than five percent of the GDP will be devoted to the development of rural areas by 2027 and 700 medical facilities will be opened in rural areas, indicating 85 percent of residents live in rural areas.

During the meeting with the voters in the Zhetisu Region on Nov. 4, Koshanov said agriculture must become one of the main engines of the economy.

“For these purposes, within seven years, one trillion tenge ($US2 billion) will be allocated for the development of agricultural cooperation that will cover more than one million villagers,” he said.

Tursynbekova has been positioning herself as a candidate close to “those who remain secondary and whose questions are deferred to the next day every day.” 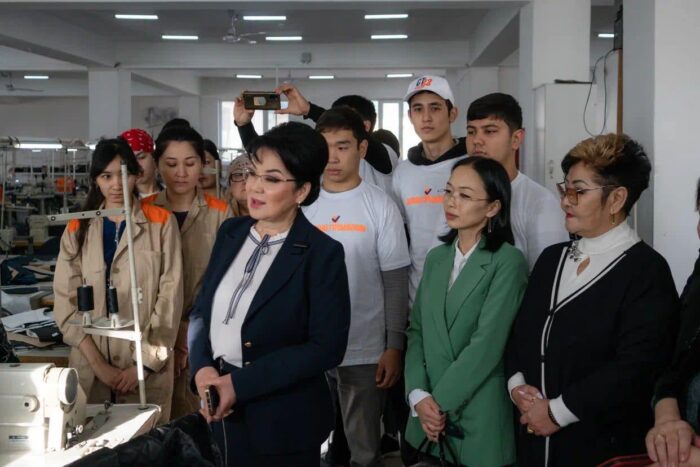 Her visit to the animal shelter on Oct. 29 supports her stance. “There are no state shelters for animals in Kazakhstan, there are only trapping services and temporary holding centers. (…) I intend to address this issue whether I become the President or not,” she wrote on her Facebook page.

Her focus on fighting domestic violence, discrimination against women and ensuring support for women in business increased her appeal among women who often express their support on social media platforms.

On Oct. 31, Tursynbekova met with 250 employees of the Gauhar garment factory in Shymkent. “It is a pleasure to see a product that can be proudly said to be ‘made in Kazakhstan’. It is twice as pleasing to see such a large and well-known company headed by a woman. Many people do not believe that a woman can be a successful leader, but I believe that a woman can do everything: manage a factory, manage large teams, and even the entire country,” she said.

Tursynbekova continued her campaign in the Turkistan Region on Nov. 1, where she met with the employees of Kentau Transformer Plant, spoke to people with disabilities in the Shapagat community and visited the House of the Region non-governmental organization.

“All three categories of people require attention and support right now. We cannot wait for years to improve the lives of the people of Kazakhstan. We need change today and tomorrow,” said Tursynbekova, concluding her visits for the day.