ASTANA – Kazakh President Kassym-Jomart Tokayev emphasized the need to rationally leverage the Mangystau Region’s advantageous geographical location to turn it into a worldwide transportation and transit center during his Nov. 7 meeting with the region’s public, reported the presidential press service. 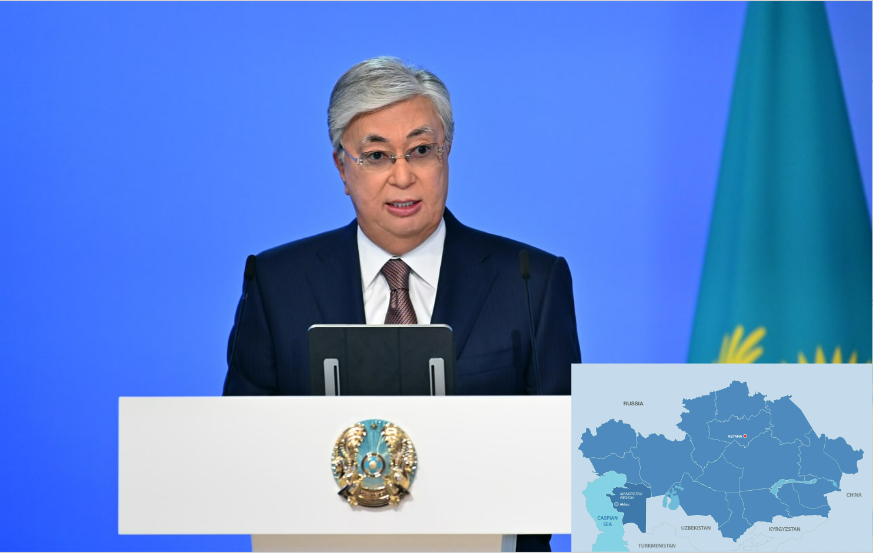 “The port city of Aktau is rightfully known as Kazakhstan’s sea gate. The Caspian Sea’s significance has increased considerably amid the transformation of global logistics chains. We intend to implement several steps to encourage investments in developing port infrastructure and establishing container and transport-logistics hub,” he said.

According to him, the Aktau seaport special economic zone (SEZ), which is one of the nation’s leaders in terms of investments, production volume and taxes paid, offers ample opportunities.

Tokayev proposed that the government extend the terms of operation of SEZs as they provide opportunities for international investments. He brought up a green hydrogen project, signed during the official visit of the President of the European Council Charles Michel to Kazakhstan, as one of the successful examples of investment cooperation.

“It is also planned to build a desalination plant with a capacity of 255,000 cubic meters per day and a renewable energy station for 40 gigawatts. The implementation of this project will create around 3,500 jobs during the construction period and 1,800 new permanent jobs during the phased commissioning of the facility,” said Tokayev.

According to Tokayev, the region plays a vital role in the country’s transport and transit strategy. Photo credit: Akorda press service

Nine water desalination projects and four projects for the construction and reconstruction of main water pipelines in the region will be implemented by 2025 as part of the effort to provide the region with clean drinking water.

While expanding the region’s transportation and logistics potential, the President urged that opportunities for food export and import be enhanced. Tokayev suggested establishing production facilities for processing agricultural raw materials with foreign partners. The finished products can then be exported overseas.

Despite the region producing 25 percent of the country’s oil, opportunities for the development of manufacturing industries are growing. He emphasized the diversification of the nation’s economy is possible only by creating high-value-added industries.

At least 29 projects worth nearly one trillion tenge (US$2.2 billion) are to be implemented in 2023-2026, creating 3,000 jobs. The region’s entrepreneurial potential, he noted, is huge, with small and medium-sized businesses accounting for 32 percent of the region’s gross regional product and providing 140,000 jobs.

According to Tokayev, Aktau, the region’s administrative center, should become one of the country’s main tourism centers and also drew attention to the region’s distinctive flora and fauna, including the Ustyurt Plateau and the Bozzhyra Tract, as well as the pink flamingos and Caspian seals.

He stated that tourism has a multiplicative effect on the region’s economy by providing opportunities for international investors and permanent employment for the population. However, while developing tourism, “biodiversity conservation and the delicate balance of the region’s ecosystem” must be ensured.

Tokayev advocated for preserving the Caspian Sea’s biological balance and biodiversity. He cited the mass extinction of fish and seals, listed in Kazakhstan’s Red Book, as a result of human activity and climate change.

“The problem of conservation and recovery of this species is under my personal control,” he added. “Previously, it was proposed to establish state nature reserves in the Mangystau Region to protect the Caspian seal population. The Ministry of Ecology must expedite this task while also making all required decisions”.

“It is necessary to establish a state scientific institute to conduct Caspian Sea research. Furthermore, the government should collaborate closely with colleagues from other Caspian states on this issue,” Tokayev concluded.