By Saniya Bulatkulova in Kazakhstan Region Profiles: A Deep Dive Into the Heart of Central Asia, Nation on 11 November 2022 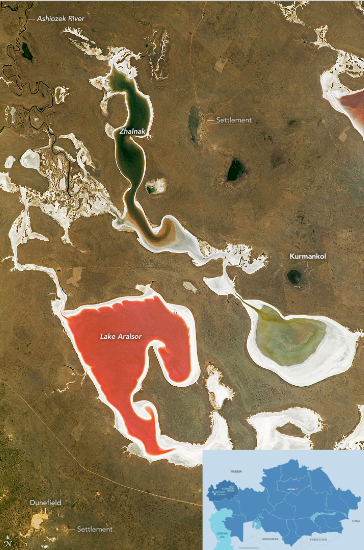 According to the observatory’s press service, an astronaut of Expedition 67 Crew took the photo with a Nikon D5 digital camera using a focal length of 400 millimeters aboard the International Space Station (ISS) on June 15.

“Evaporation increases the salinity of the water in this region, allowing different species of salt-loving microorganisms to thrive. The different salinity and temperature in each lake influence the dominant microbe species that flourishes. Different microorganisms display varying colors, as varying lake water depth accentuates or softens the tones. Exposed salt and not an active microbial community may explain the brilliant white of the smaller lake bed at the lower right,” the report said.

Similar multi-colored lakes can be found in Australia and Namibia.