Legendary Almaty Aport Apple Has Glorious Past and Bright Future

By Saniya Bulatkulova in Society on 19 November 2022

ASTANA – Once widely known not only in the territory of Central Asia but also throughout the world, Aport apples have glorified the southern city of Kazakhstan in such a way that the town started to bear the name of Almaty, which translates as “Father of Apples” from the Kazakh. However, local farmers are doing their utmost to restore former crops of a unique variety that received numerous top awards at international exhibitions for its wonderful smell, juiciness, and sour-sweet taste. 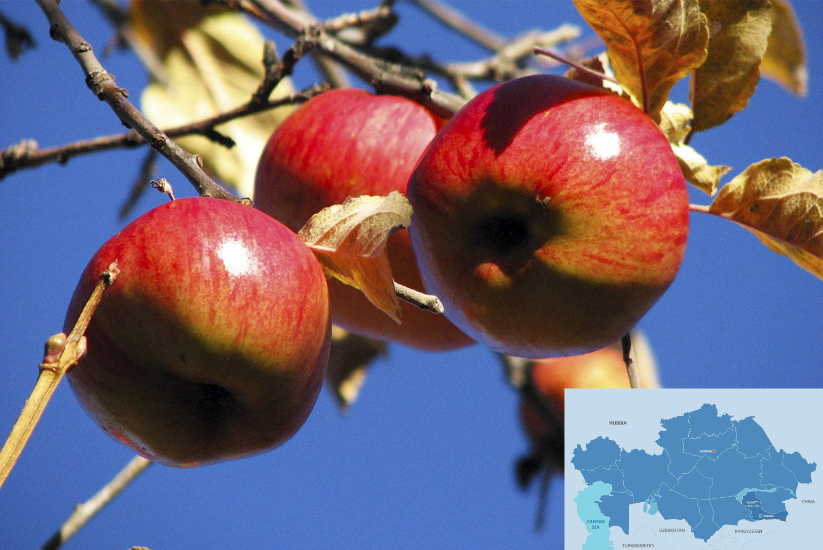 The first reference to aport as a variety of apples was found in the monastery archives and dated back to 1175. Scientists have different opinions about its origin: some people consider it Ukrainian, others – Russian, and third – Turkish. Another theory says it is an authentic aborigine of the Almaty Region’s mountains.

In one of his articles, local scholar Magzhan Isin wrote that Russian peasant Yegor Redko arrived in the city of Verny (former name of Almaty) from the Ostrogozhsk district of the Voronezh province and brought Aport apple seeds in 1865. He planted these seeds on the bank of the Malaya Almatinka River in the foothills of the Trans-Ili Alatau mountains and crossed some of them with the local wild apple tree. As a result, the Aport apples, unremarkable in their homeland, transformed in the local area and became large, tasty, and beautiful fruits weighing up to 200-250 grams. 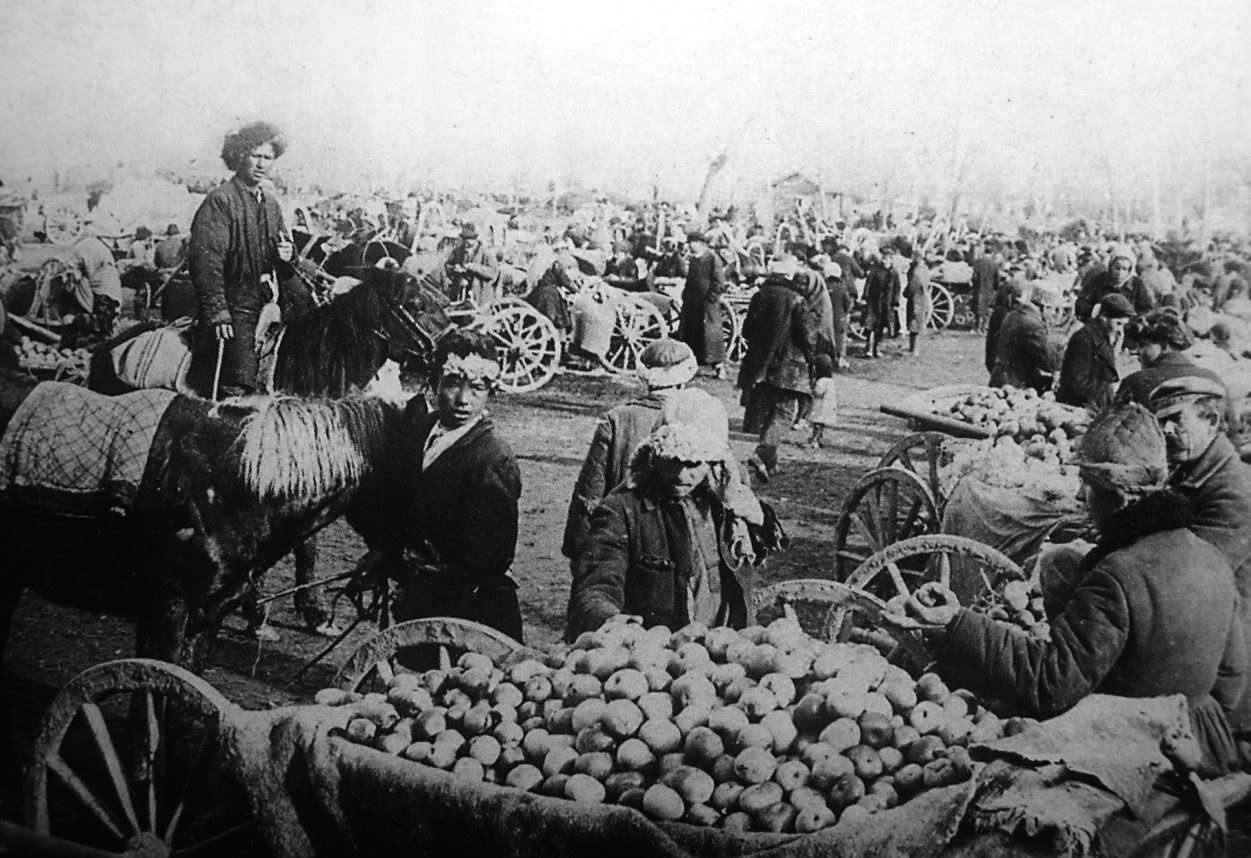 In 1914, senior inspector for gardening Perkovskiy wrote: “Local owners of peasant farms work on the acclimatization of varieties of fruit trees; nature has provided suitable varieties, namely Aport apples and Forest Beauty pears, only for the city of Vernyi and its surroundings; both of these varieties represent the main plantations of Vernyi city’s gardens.”

About Aport apple’s cultivation in the Almaty region

The first extensive commercial gardens appeared in the vicinity of Almaty in the 1930s, and the second wave of aport breeding occurred in the early 1950s. However, severe frosts happened in the winter of 1952. Therefore almost 65,000 Aport trees froze. Since 1959, gardens have been developed with renewed vigor.

According to the census of 1970, 78.8 percent of the country’s Aport apples were concentrated in the Almaty region.

“Aport demonstrated its best qualities at an altitude of 900-1,300 meters above sea level in the conditions of the Almaty region. In addition, Aport trees are grown in West Kazakhstan and mountainous areas of the South Kazakhstan Region,” said Koumchan Omarov, deputy head of the region’s Agriculture Department, in an interview with The Astana Times. 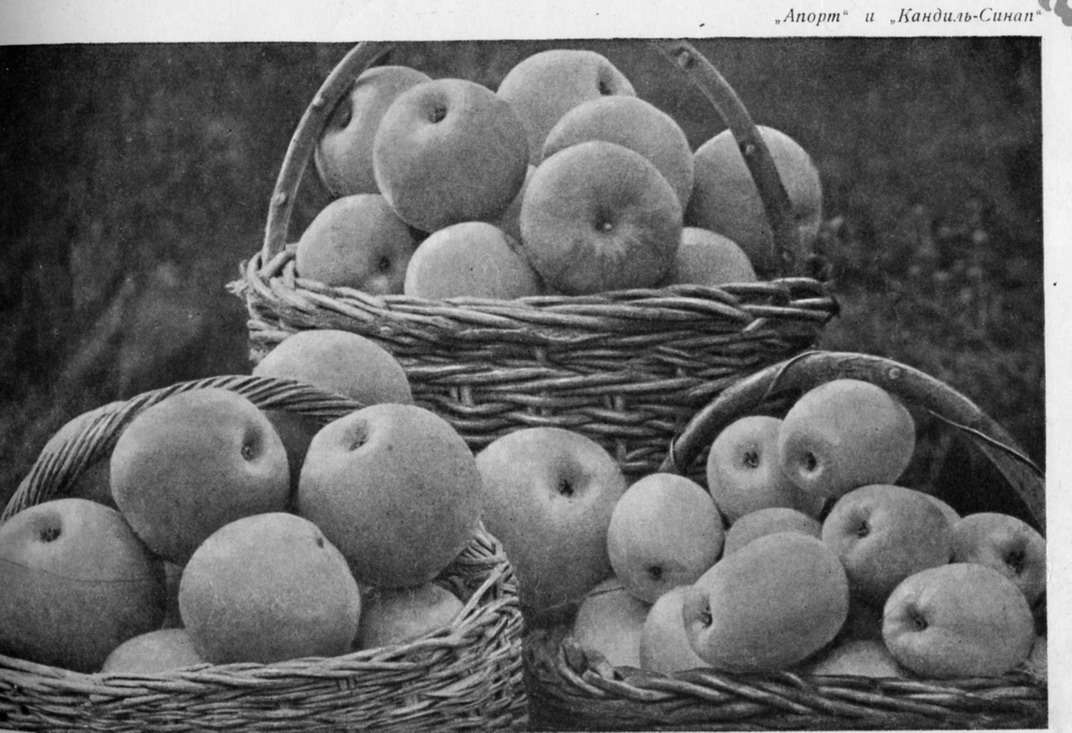 Aport apples (on the left and in the middle) and Kandil Sinap apples. Photo credit: informburo.kz

The development of private ownership in the foothills led to the collapse of apple orchards, so the areas with fruit trees significantly decreased.

In an interview with The Astana Times, Saule Kazybayeva, the deputy chair of the Board for Scientific Work at the Kazakh Horticultural Research Institute, spoke about other reasons for the decline in aport production.

“One of the main reasons for the decline in the production and quality of Aport apples was its unsystematic reproduction and, consequently, the prevalence of its low-quality forms, which gave rise to the statement about ‘aport’s degeneration.’ In addition, insufficient irrigation was also one of the reasons for the decline as Aport is a very demanding variety for moisture,” explained Kazybayeva. 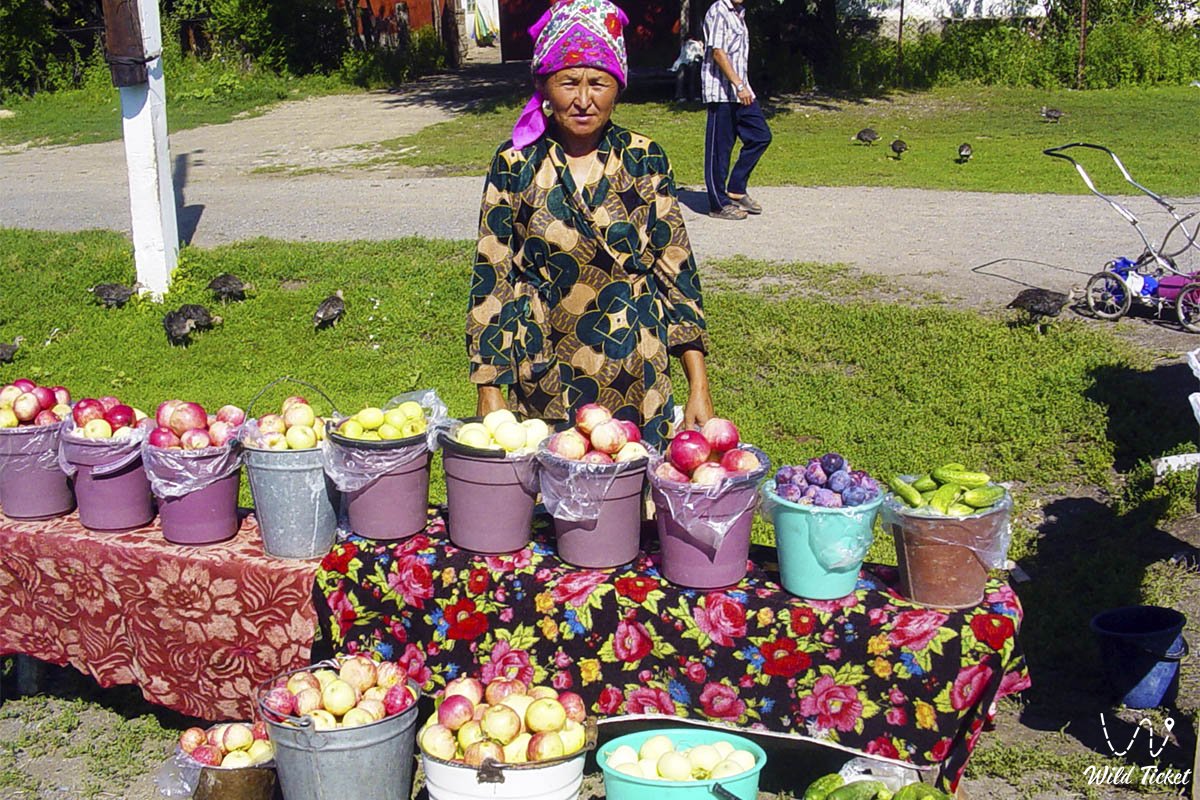 An unkown woman selling Aport apples and other vegetables and fruits in the street. Photo credit: wildticketasia.com.

She added that aport’s late entry into fruition resulted in a significant decrease in the planting of apples and its displacement from gardens. Such overseas apple varieties as Golden Delicious and Starkrimson begin to bear fruit for the third or fourth year after planting, while Aport gives the first fruits for seven-nine years.

There are approximately 1,000 hectares of Aport trees in the Almaty region and 2,000 hectares across the country, according to Kazybayeva.

She said that the best conditions for apples are provided in South and Southeast Kazakhstan in areas with positive air temperatures for the growing season ≥ 100 -2,750 -34,000. 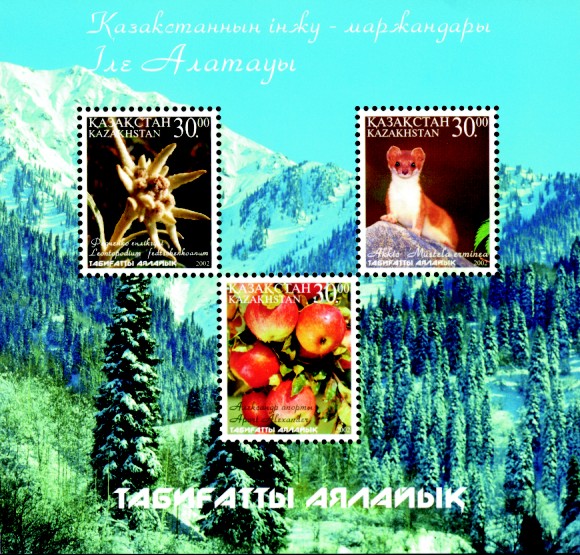 Irrigated lands of the lower mountain and middle mountain zones of the Trans-Ili Alatau mountains, with altitudes from 950 to 1,200 meters, are favorable for Aport apples. Still, free land for planting trees in these zones is becoming less. The foothill part of Taldykorgan and Sarkand districts at an altitude of 850-1,100 meters in the mountains of Dzungarian Alatau is also suitable.

Aport trees are not recommended to be grown in the southern districts of Zhambyl and Turkistan Regions, as well as in the lower zones of the Almaty region.

How to restore apple variety

According to Omarov, the Kazakh Horticultural Research Institute has been studying the Aport variety since the 1960s. Its scientists Arkadiy Kaceiko and Mariya Levina found that Aport apples bring fruits for 9-10 years after planting. 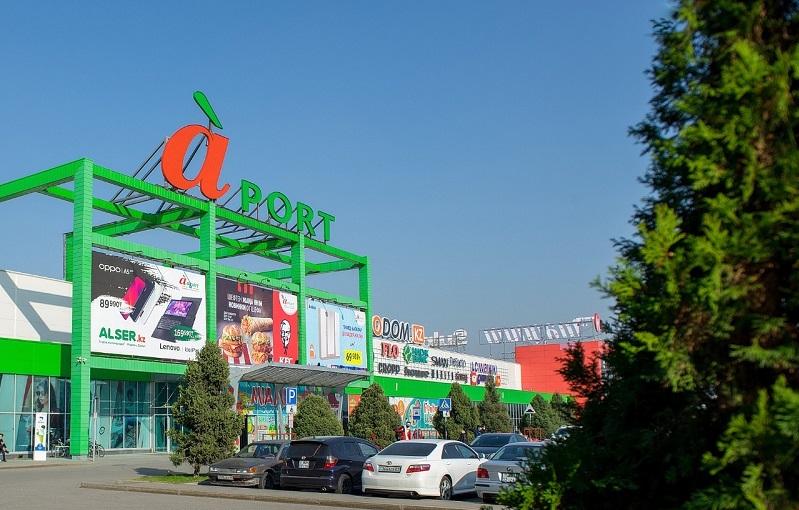 One of the Almaty’s malls bears the name of Aport. Photo credit: inform.kz

“In 2015, we planted the aport orchard, which produced its first harvest this year, but not all trees have given fruit. We expect the harvest to increase in 2024 when the aport reaches its maximum production of 300-350 centner per hectare. It is also worth noting that aport has a four-year cycle, which means apple should rest after abundant fruition,” said Omarov.

Kazybayeva pointed out that the institute’s employees have developed a drip irrigation system for Aport orchards, allowing them to use irrigation water efficiently and create an optimal humidity regime for apples.