Kazakh Youth Come Together for Community Climate Solutions Ahead of COP27

By Zhanna Shayakhmetova in International, Society on 1 November 2022

ASTANA – The Kazakh students had a chance on Oct. 28 to debate on climate solutions at the Voice of Youth from Glasgow to Sharm El-Sheikh event at the Narikbayev KazGUU University ahead of the 27th UN Climate Change Conference of the Parties (COP27). 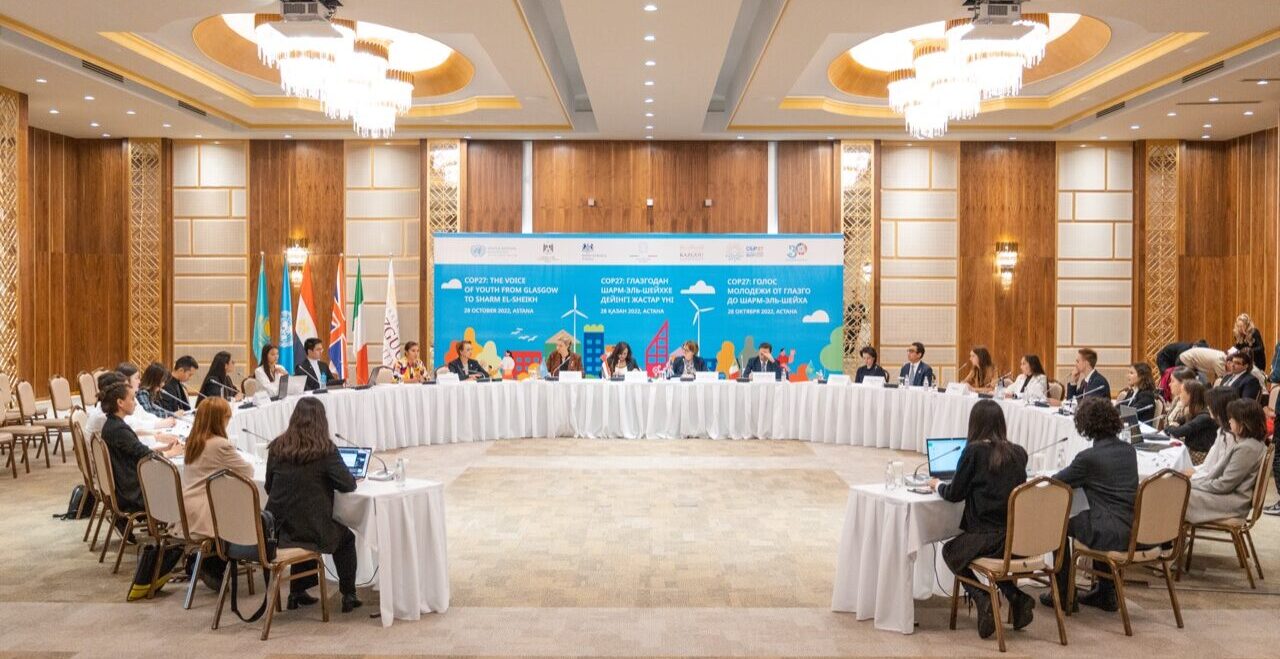 Participants of the event. Photo credit: UN in Kazakhstan

The UK will hand over its presidency to Egypt, which will host COP27 in Sharm El-Sheikh on Nov. 6-18.

UN Resident Coordinator in Kazakhstan Michaela Friberg-Storey spoke about the climate-related hazards and the role of COP27 in her opening remarks. “The summit will focus on the implementation, and operationalization of all the commitments made [at the COP26]. The UN is focusing on two key aspects – to address loss and damage that are beyond the country’s abilities and continue to push for the finance of climate action, and that those promises are kept,” Friberg-Storey said.

According to the newly released Emissions Gap Report 2022, the countries fail to reach the Paris agreement targets “with no credible pathway to 1.5C in place.”

“Unless we decline our carbon emissions, which is 45 percent, we are not going to reach the 1.5-degree target. We are looking at a 14 percent increase in emissions. That leads us to a situation where we are facing a 2.8-degree increase in temperatures. This is a climate disaster,” she said.

The UN Team with 27 UN agencies has worked with the Kazakh government to update the nationally determined contributions (NDCs) for further submission to the Conference of the Parties this year. Kazakhstan has committed to an unconditional goal to reduce its greenhouse gases by 15 percent by 2030.

Friberg-Storey also called on the students to take action in response to climate change and accelerate the 2030 agenda.

It should be noted that the COP26 held in Glasgow gathered more than 120 world leaders from 200 countries and gave the world the tools needed to keep 1.5C alive. The Glasgow Climate Pact now remains the blueprint for accelerating climate action.

British Ambassador to Kazakhstan Kathy Leach noted that technology will solve the climate crisis. “Around five years ago, we passed a tipping point when annual newly installed power capacity from renewables overtook the installed capacity every year from coal. Estimates suggest that this decade, renewable energy will become the energy of choice. The cost of solar has come down 80 percent since 2010, the cost of wind power has come down by three quarters, by 75 percent since its peak 10 years ago, so these technologies are far more affordable than before,” she said.

Ambassador Leach stressed that the youth’s actions are important because green transformation is a whole of society’s transformation. It requires support from the people to use resources responsibly, switch up lights, turn down thermostats, recycle bottles, and other actions.

In September 2021, Milan hosted the PreCOP26 meeting as well as the Youth4Climate conference to develop approaches to the remaining climate issues. The voice of the youth should serve as a wake-up call to governments around the world, said Ambassador of Italy to Kazakhstan Marco Alberti.

“COP26 messages were pretty clear: ensuring promises on emissions reductions; delivering for climate vulnerable countries by ensuring commitments on adaptation and loss and damage are honored; getting finance flowing; working together and continuing to be an inclusive Presidency. This is the very core of the message we would like to deliver to our Egyptian friends,” Alberti added.

Ainur Karbozova, Deputy Chairman of the Board of Narikbayev KAZGUU University, expressed gratitude to the UN office for giving the students “a chance of wearing hats of the global politicians and facing current challenges of humanity.”

“Kazakhstan and the UN have a long-standing partnership… All the political initiatives of Kazakhstan, in climate change issues, in particular,  were made from the United Nations tribune, including our initiatives against terrorism, regional security in Asia, closure of the nuclear test site and fight against nuclear tests globally,” said Karbozova.