From Classics to Ethno-Jazz: Globally Recognized Pianist Ludmila Berlinskaya to Participate in Upcoming Concert in Astana

By Saniya Bulatkulova in Astana on 22 November 2022

ASTANA – The Erkegali Rakhmadiyev State Academic Philharmonic is set to present a concert by well-known France-based pianist Ludmila Berlinskaya and Gaziza Zhubanova State String Quartet as a part of the “From Classics to Ethno-Jazz” project on Nov. 23 in Astana, the Kazinform agency reported. 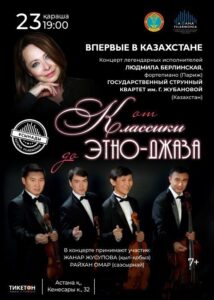 Gaziza Zhubanova State String Quartet’s artistic director Yernar Myntayev said in an interview with Kazinform agency that the idea of cooperation with Berlinskaya appeared long ago, when he was a student and was taught by Berlinskaya’s outstanding farther  – Valentin Berlinsky.

“The concert in the capital’s philharmonic will be the second joint performance with Ludmila Berlinskaya. We will perform a classic program in the chamber hall of Astana Opera the day before. On Nov. 23, we will present something quite different – an unusual concert that will bring together fans of classical music, jazz and traditional art as a part of the project,” said Myntayev.

At present, Berlinskaya is a professor at the Paris Conservatory and author of master classes that she conducts across the globe. Since 2011, Berlinskaya has formed a piano duo with French pianist Arthur Ancelle. Later she created La Clé des Portes music festival with Ancelle.

Founded in 1997, the Erkegali Rakhmadiyev State Academic Philharmonic has become one of the leading concert and educational institutions of the city, where 11 creative groups now operate. It cooperates with leading foreign performers and conductors from Russia, Germany, Poland, United States, Latvia, Israel, Slovenia, Greece and Italy among other countries.