ASTANA – The city of Almaty embodies Kazakhstan’s independence, said Kazakh President Kassym-Jomart Tokayev during his meeting with the public of Almaty on Nov. 16, reported the Akorda press service. 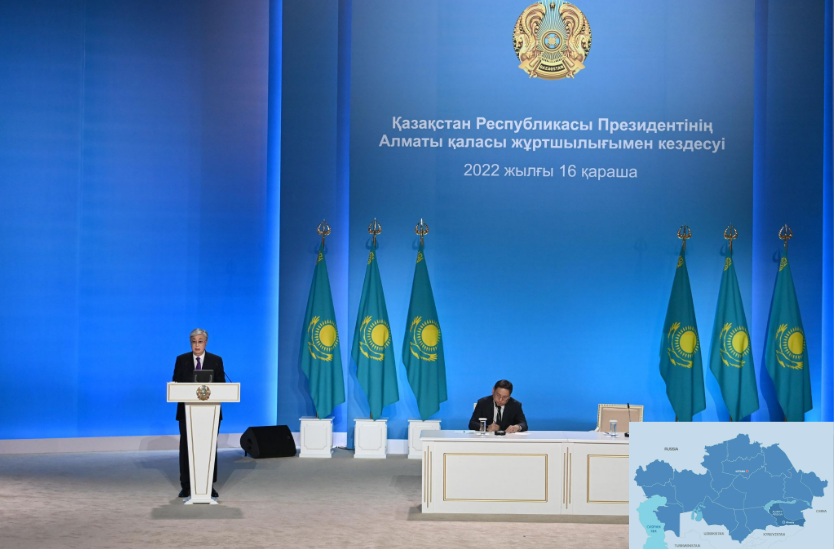 He emphasized that many significant events in the country’s history took place in Almaty, including the signing of the Sovereignty Declaration and the proclamation of independence.

Tokayev stressed that real estate, transportation and trade account for 70 percent of all investments, citing poor economic diversification as a reason for a slowdown in the growth of people’s incomes.

“The city has fallen into the so-called ‘middle-income trap,’ which requires significant economic diversification. The development of the manufacturing, tourism, information technology, and creative industries should be prioritized,” he added.

The President also highlighted the need to attract investments and build up the IT industry. The manufacturing industry, he stressed, should develop using modern environmentally friendly technologies and digitalization.

“The potential of the Almaty industrial zone and the Alatau Innovation Technology Park should be fully realized. More than 1,000 enterprises creating up to 20,000 jobs will be located here,” the President said.

Tokayev instructed the cabinet to work on ensuring Almaty’s growth remains at the level of 5 percent, considering the city’s growing population.

The President pointed out that many talented Kazakh citizens are becoming popular abroad.

This country, however, needs to create space for their self-realization. Creative industries, he noted, are becoming the main economic driver with 19,000 companies working in this field in Kazakhstan.

“To implement citizens’ creative initiatives, the city will launch creative hubs and clusters shortly. I support the idea of the akimat [mayoral office] to create a city venture fund with an initial capitalization of 10 billion tenge (US$21.6 million),” Tokayev said.