ASTANA – Addressing the people’s coalition forum that nominated the incumbent President as their candidate on Oct. 6 in Astana, Kassym-Jomart Tokayev said that the head of state must not prioritize any party and should be politically neutral, reported the Akorda press service. 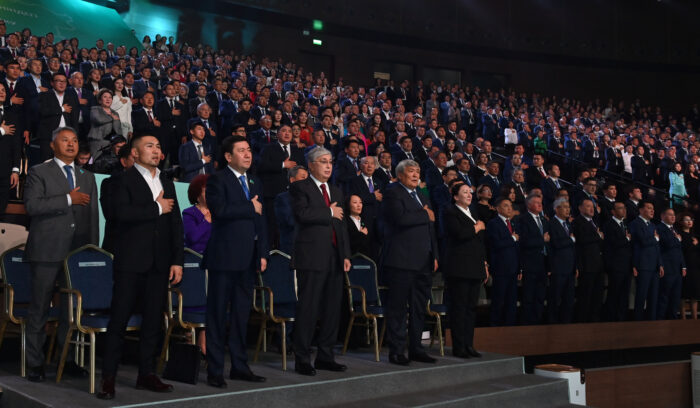 “I have never wavered from this position. It is a great honor and responsibility to run in the presidential election as a common candidate. It is imperative that the coalition includes leading political parties, public organizations, and movements. Thus, the coalition covers all social strata,” Tokayev said.

According to the President, the state has been strengthening its economy and raising citizens’ living standards. Small and medium-sized businesses in the country benefit from favorable conditions as agricultural production boosts capacity.

“Our top priority, which will never be revised or corrupted, is to improve people’s well-being. I authorized the  raise of the pay of medical personnel, teachers, and public sector employees. The government has assured that pensions, scholarships, and allowances continue to grow steadily. Because of the early withdrawal of a portion of their pension, more than 1.5 million Kazakh citizens were able to improve their living conditions and undergo treatment,” Tokayev stated.

According to Tokayev, the Kazakh Constitution, land and its resources belong to the people. The President said that in January this year, that Kazakhstan established the Qazaqstan Halqyna (to the people of Kazakhstan) Foundation to provide social support to people in need. A new program dubbed National Fund for Children, launched in 2022, is an unprecedented measure aimed at achieving a fairer distribution of national wealth.

The people’s coalition, formed on Oct. 6, has united over 30 non-governmental organizations and parties.