ASTANA – The Pavlodar Region should focus on strengthening its industrial and innovative potential, solving environmental and water supply issues, and developing the region’s infrastructure, creative industry, and tourism, said President Kassym-Jomart Tokayev during an Oct. 5 meeting with the region’s population, reported the Akorda press service. 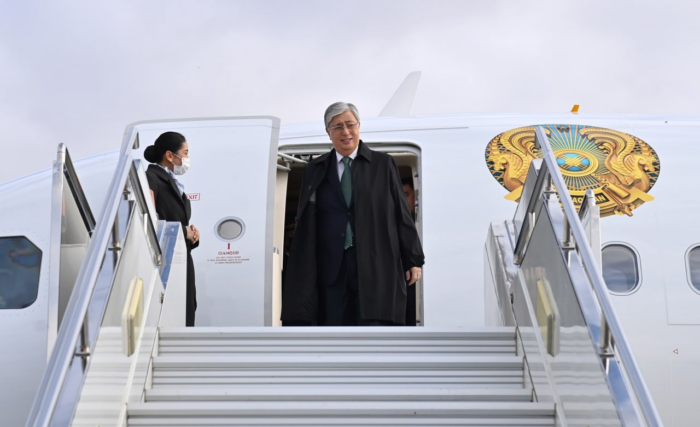 President Tokayev arriving to the Pavlodar Region as part of his tour across the country. Photo credit: Akorda press service.

“The Pavlodar Region is one of our country’s most important industrial centers. The availability of resources and electricity and developed infrastructure open up great prospects for the region’s further development,” said the President.

Tokayev called the region an “energy heart,” which produces more than 40 percent of the country’s electricity. He highlighted the dynamic development of agriculture, construction, and trade, with Pavlodar’s total regional product increasing 28 percent in the last three years to $8.3 million.

“Diversifying the economy and expanding the range of goods produced are priority tasks for all regions. I set out these targets in last year’s address. Manufacturing exports must be increased by 1.5 times by 2025, and labor productivity must grow by 30 percent,” noted Tokayev.

He then emphasized that industrial progress inevitably affects the environment. The President stressed the importance of achieving a balance between expanding industrial capacity and environmental protection, stating that the region accounts for one-third of the country’s emissions – nearly 700,000 tons annually.

Tokayev brought attention to another issue in the region – clean water supply, which grew from 55 to 94 percent in three years.

“The Yertis River is crucial to the Pavlodar Region. It provides the primary source of livelihood for the population, industry, and agriculture. Irrigated land area in the region increased 1.5 times in the last three years, and it needs to be doubled to 300,000 hectares,” he said.

The President also spoke about the region’s development of culture and sports. He spoke of many prominent figures from Pavlodar, including Grammy-winning musician Imanbek.

To preserve the level of the region’s development and enhance it further, Tokayev left instructions for the improvement of city infrastructure, the maintenance of historical sites, and the expansion of proper educational projects.