By Staff Report in Conference on Interaction and Confidence Building Measures in Asia, International on 4 October 2022

ASTANA – The League of Arab States (LAS) confirmed its participation in the sixth Conference on Interaction and Confidence Building Measures in Asia (CICA) Summit on Oct. 12-13 in Astana, during a meeting of Kazakh Ambassador to Egypt Kairat Lama Sharif and the LAS Deputy Secretary General for Political Affairs, Ambassador Khalil Al Thawadi, reported the Foreign Ministry’s press service on Oct. 2. 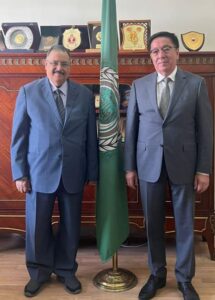 Lama Sharif noted that this year marks the 30th anniversary since the idea behind ​​CICA was put forward at the 47th session of the United Nations (UN) General Assembly. Today, CICA includes 27 Asian countries and six Arab states (Bahrain, Egypt, Jordan, Palestine, Qatar, and the United Arab Emirates). In 2021, Kuwait applied to join CICA as a member state.

Lama Sharif has expressed the ongoing work’s relevance in transforming this dialogue platform into a full-fledged international organization. He also noted that the proposed transformation would highlight Asia’s new role in global affairs.

Al Thawadi focused on the need for the high efficiency of the organization in ensuring multilateral cooperation between the region’s countries. He emphasized the interest of the Arab League, which has observer status in the CICA, in deepening collaboration with the organization.

Special attention was paid to the discussion of initiatives such as the establishment of the Council of Wise Men and the Forum of Analytical Structures as a permanent platform, which, according to Khalil Al Thawadi, “create unique incentives for cooperation.”