By Dana Omirgazy in International on 12 October 2022

ASTANA – Kazakhstan and Türkiye seek to bring the bilateral trade turnover to $10 billion in the mid-term, said President Kassym-Jomart Tokayev at the fourth meeting of the High-Level Strategic Cooperation Council, as Türkiye’s President Recep Tayyip Erdoğan paid a state visit to Astana on Oct. 12, reported the Akorda press service. 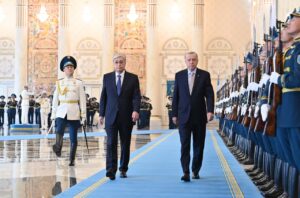 The Presidents of Kazakhstan and Türkiye focused on foreign policy and investment, trade and economic cooperation, transport and logistics, military industry, energy, and agriculture at the meeting. Tokayev said that Ankara had invested $4.35 billion in the country during the last 15 years, whereas Kazakhstan has invested $1.13 billion in Türkiye.

“Türkiye is one of Kazakhstan’s top ten largest investors. Transit and transportation links are critical in developing bilateral trade potential. We advocate for the expansion of the Trans-Caspian Corridor to reduce transportation costs and delivery times,” Tokayev said.

In June of this year, the foreign and transport ministers of Kazakhstan, Azerbaijan, and Türkiye convened in Baku to explore ways to boost cooperation in logistics and energy. To continue this tradition, Tokayev proposed to hold the next meeting in Aktau.

Erdoğan, in turn, thanked the Kazakh people for their hospitality and expressed interest in the development of cooperation between the two countries in all areas. According to him, Türkiye contributes to the diversification of the Kazakh economy. He also expressed hope that Türkiye’s companies will facilitate the implementation of initiatives to employ the people.

“We agreed to bring trade turnover up to $5 billion in the short term and up to $10 billion in the medium term. So far, everything is going according to plan. Our cooperation in the transport and logistics sector allows us to achieve our mid-term goals in a short time. The importance of the Caspian Sea is growing. The trilateral meeting in Baku was a success. We hope that the meeting in Aktau will advance this work. We duly fulfill our obligations to the world community to ensure global food security. I believe in this regard, the potential of wheat-rich Kazakhstan can be used,” Erdoğan said. 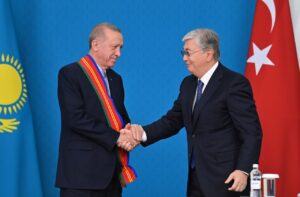 The President of Türkiye emphasized it is necessary to strengthen the interaction of the Turkic states amid global and regional instability.

“Therefore, it is important to ensure security, stability, territorial integrity, and the economic well-being of Kazakhstan, a brotherly country and a strategic partner of Türkiye,” Erdoğan said.

The trade turnover between Kazakhstan and Türkiye in January-July of this year reached $3.5 billion, a 66-percent growth compared to the same period in 2021.

Export from Kazakhstan to Turkey increased by 90 percent ($2.8 billion) and 12.8 percent ($744.8 million) in imports for the reporting period.