By Zhanna Shayakhmetova in International on 21 October 2022

ASTANA – Kazakhstan has been an important actor in the European Energy Charter Treaty (ECT) since becoming its member in 1991, said Secretary-General of the Energy Charter Secretariat Guy Lentz in a recent interview with The Astana Times. 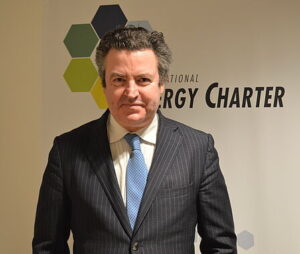 Lentz recognized Kazakhstan’s unique role in the negotiation process and its participation in initiatives, meetings, and working group commissions.

The charter provides a framework and forum for cooperation on energy security, open and competitive markets, and sustainability. There are currently 53 signatories and contracting parties to the ECT, including both the European Union and Euratom.

“The reason for my visit is the importance of Kazakhstan. Besides the EU countries, which are all members of the charter, Kazakhstan is one of the leaders among other parts of the countries,” said Lentz.

The Secretary-General met with the officials and ministers to discuss the ECT’s modernization processes and Kazakhstan’s carbon-neutral strategy for 2060 during his official visit to Astana on Oct. 12-13.

“The world faces new geopolitical challenges, with the energy crisis, especially with the situation in the EU, whose countries are the members of the charter. We now discuss how to solve this problem and what are the plans for energy and what was done and what are the problems the ECT will face this year. In this crisis, one lesson that the EU has learned and hopefully they will take the structural measures to go against this for the future – the energy dependency of Europe,” said Lentz.

The modernization of the ECT remains topical. All countries including Kazakhstan are working on this process.

“The treaty was signed in 1991. Now we have to update its content and to make it comply with the climate exigencies in terms of environment, CO2 emissions, energy to produce and priorities to be given to new energies, to renewable energies, and to start to carve out and to phase out the investment into fossil fuel,” explained Lentz.

Lentz also discussed the process of modernization of the ECT and the forthcoming ratification of the modernized treaty with Minister of Energy Bolat Akchulakov. They agreed to continue long-term cooperation between the Ministry of Energy and the Energy Charter Secretariat.

The next Energy Charter Conference will be held in Ulaanbaatar, Mongolia on Nov. 22-23. “The main issue of the conference will be the adoption of ECT modernization. In June, in Brussels, we achieved what we have called an agreement of the main principles. But now we have to officially by consensus that all countries are on board and agree about this modernization,” said Lentz.