By Zhanna Shayakhmetova in Business on 6 October 2022

ASTANA – The International Monetary Fund (IMF) welcomes the new reforms in Kazakhstan and is ready to provide advice and technical support, said Nicolas Blancher, the Division Chief in the IMF’s Middle East and Central Asia Department and Mission Chief for Kazakhstan during the meeting with Prime Minister of Kazakhstan Alikhan Smailov on Oct. 6. 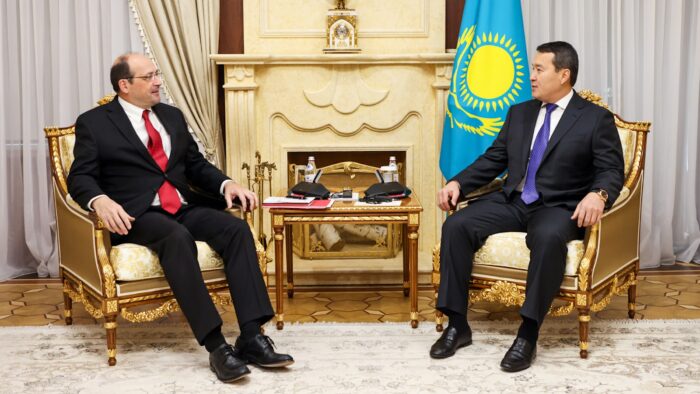 Smailov and Blancher spoke about the government’s measures to ensure macroeconomic stability, control inflation, improve the efficiency of tax administration and budget planning, employment, digitalization and reduce state involvement in the economy.

“We highly appreciate the strategic nature of our partnership with the IMF and the contribution the fund makes to the development of our country,” said Smailov.

On Oct. 5, Blancher said that the IMF recognizes the Kazakh government’s efforts in the field of regulation of transactions, in particular, those related to trade operations, to minimize situations that lead to sanctions during the press briefing at the National Bank’s office, reported Kazinform.

Blancher said that despite the close economic relations between Kazakhstan and Russia, the IMF has not observed any incidents that could be considered a violation of rules and there is no ground to believe that such incidents may happen in the future.

He noted that the Kazakh authorities cooperate with the authorities of foreign countries to avoid any possibility of sanctions and to ensure that the banking system of Kazakhstan works well.

The IMF noted a slowdown in the economic growth of Kazakhstan although the leading indicators came in better than expected. The IMF predicts Kazakhstan’s growth rate will recover next year and stabilize in the medium term at 3.5 percent in the coming years. Risks remain in this scenario due to the situation in Ukraine and sanctions against Russia, Blancher noted.