ASTANA – Kazakhstan celebrates the 100th anniversary of a Kazakh heroine Manshuk Mametova, who mastered the Maxim machine gun during World War II and fought the Nazis till her last breath. 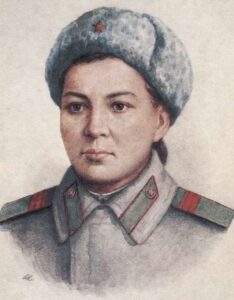 Mametova was only 21 when she died defending her country.

Born in 1922 in Zhaskus village in the West Kazakhstan Region, Mametova was the fifth child in the family. At the age of five, she lost her parents and was raised by her uncle and his wife in Almaty.

Mametova was among millions of women whose life was overturned by World War II. In 1942, Mametova, aged 19, decided to voluntarily enlist in the army after completing two years of medical school in Almaty. Brave girl, ruffling all gender norms, she was enlisted in the 100th independent Kazakh rifle brigade.

The surviving copy of her application to the front reads, “giving a brief presentation of my autobiography, I ask you to send me to the front to destroy the Nazis, as there is no brother or sister to send. That is why I am asking to do it myself.”

At first, Mametova was assigned to the headquarters as a clerk, then as a nurse in a field hospital. In her free time, she studied the construction of the Maxim machine gun and she learned to shoot accurately in the training courses. Mametova completed the courses as the best machine gunner and was consequently appointed commander of a light machine gun. Within months she joined the front. 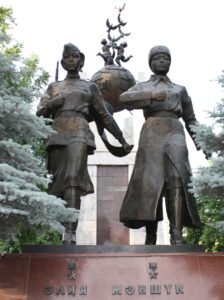 A paired bronze monument to Kazakh war heroines Manshuk Mametova and Aliya Moldagulova was installed in Central Park in Almaty.

A machine gunner with good training, Mametova was sent to Nevel town in the Pskov region on the north-western border of the Soviet Union in October 1943 towards an enemy that had crossed the Kalinin front line and was advancing fast.

In Nevel town, occupied by Nazis since 1941, the enemies continually launched counterattacks, seeking to delay the advance of Soviet soldiers. The rifle unit, which Mametova was part of, had the task of capturing the high grounds that dominated the terrain. This decided the outcome of the battle.

With the lands being bombed and dying Soviet soldiers around, Mametova rushed straight into attack. The twenty-one-year-old woman had to fire from three machine guns in rotation to prevent the Nazis from capturing their positions. She was severely wounded in the head but continued to shoot until her last breath. She died in the battle destroying, according to some sources, more than 70 German soldiers and officers.

In one of the letters to her aunt in August 1943, two months before she died in Nevel town, Mametova wrote: “Apketai (older sister), of course, I am frankly writing to you, just do not get upset and do not think about anything. If I die, it will be for my homeland, for my father, and for you.”

In 1944, Mametova was posthumously awarded the Heroine of the Soviet Union title.

There are monuments in Nevel and in Almaty erected to honor the glorious daughter of the Kazakh people. A poet Maryam Khakimzhanova devoted a poem to her and world famous movie director Andrei Konchalovsky wrote a screenplay for the film “The Song of Manshuk.” People with sufficient mountain climbing training can try to conquer the peak named after Manshuk Mametova, which is 4,194 meters above sea level located in the Small Almaty spur.