From Fireworks to Congratulations From Space: How Kazakhstan and World Celebrate Republic Day

ASTANA – Kazakhstan and the world celebrated Republic Day on Oct. 25 for the first time since 2009 with festive events that included the raising of the national flag and fireworks across the country and abroad, the display of the flag on the highest skyscraper in Dubai, and a space crew congratulations. 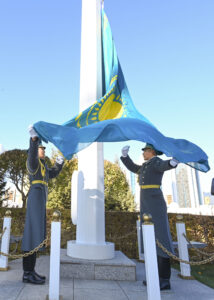 The national flag raising ceremony over the Akorda presidential residence, attended by President Kassym-Jomart Tokayev, opened a series of festivities across the country and beyond the borders. The ceremony marked the formal status of Republic Day as a national holiday.

In his congratulatory speech, President Tokayev said that Republic Day is a “bright holiday designed to elevate the spirit of the people, strengthen statehood and strengthen our unity and solidarity.”

Spectacular fireworks ignited the skies of Astana in the evening. The capital’s public went to the Yessil River embankment and the Botanical Park to watch festive fireworks and celebrate the day with their families.

Over 200 events including concerts, live performances, exhibitions, and sports events, were held in Astana to commemorate the holiday, according to the city’s akimat (administration). 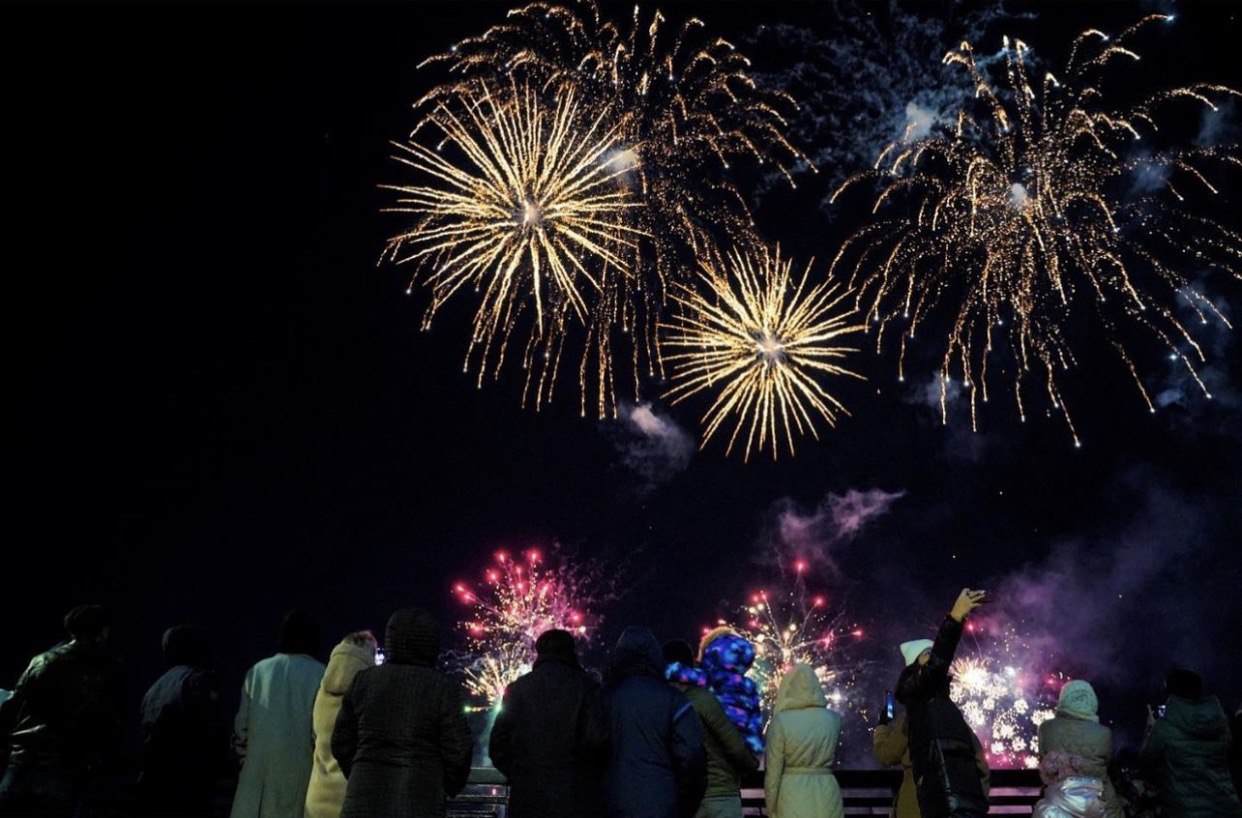 A solemn ceremony of raising the state flag and singing the national anthem took place on the Medeu mountain complex in Almaty, reported the city’s akimat. The festivities, attended by the akim (mayor) Yerbolat Dossayev, continued with a flash mob and a concert with the participation of Kazakh pop stars. 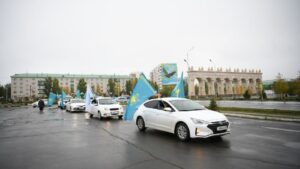 A car rally with the flags of Kazakhstan was organized in Uralsk. Photo credit: zakon.kz

In western Kazakhstan, the residents of Uralsk city organized a car rally with the flags of Kazakhstan, according to Zakon news agency. Everyone who had a white car and a state flag was encouraged to participate in the rally. Thirty cars drove through the city finishing at the First President’s Square, where concert was organized.

More than 3,000 people participated in what appears to be the most attended event, the 2022 Armanǵa jol (Path to a dream) athletic half-marathon in Karagandy. Gloomy weather conditions did not prevent people from running 21, 14, seven, or two kilometers.

As Kazakhstan continued to celebrate, the world marked the date by raising the Kazakh flag in the cities of New York and Dubai.

New York raised the Kazakh flag on one of the main historical sites of the city – the Bowling Green. New York Mayor Eric Adams attended the ceremony. 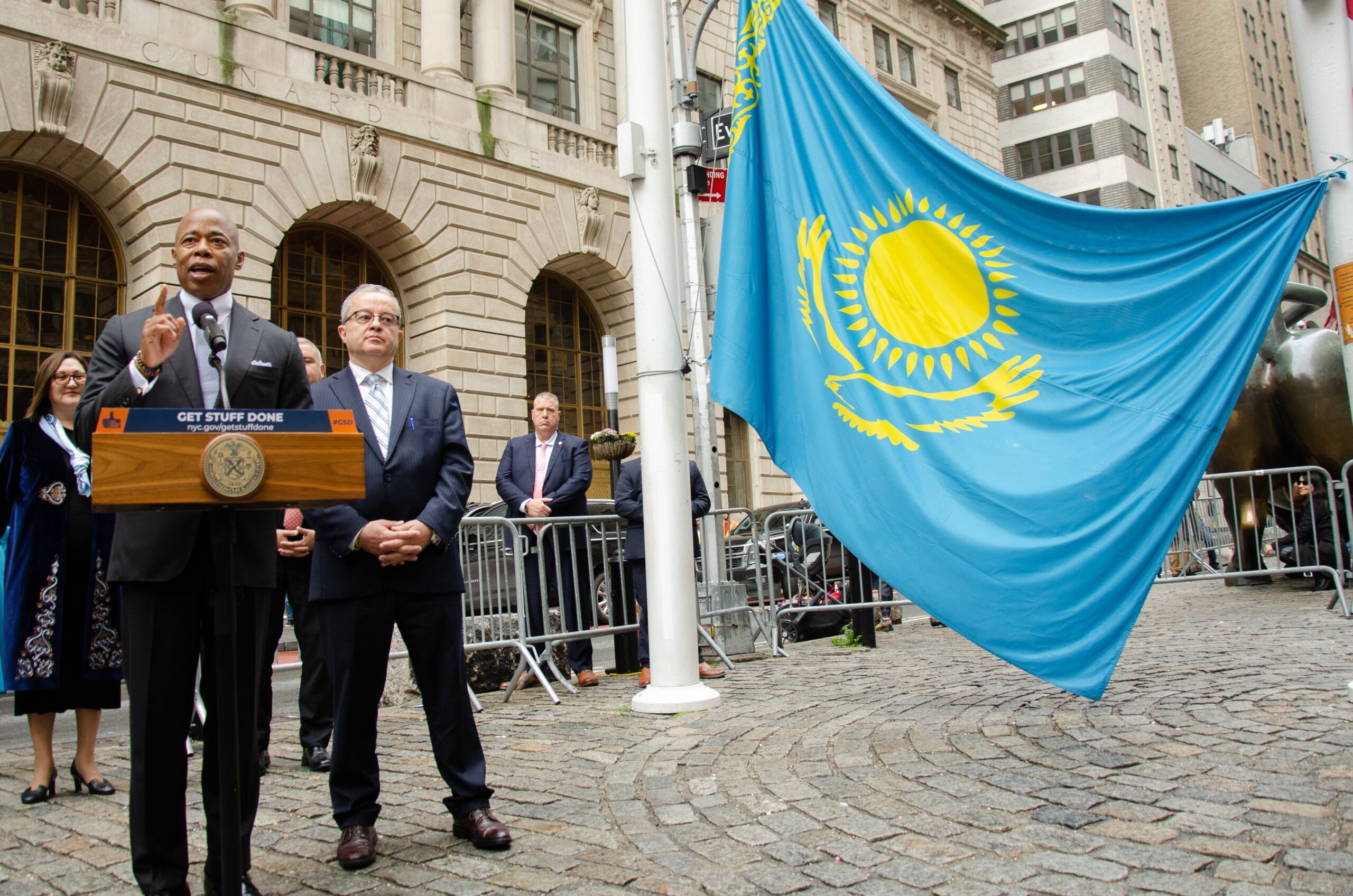 “Today, as we raised the flag of Kazakhstan to celebrate their independence, we also raise the energy and spirit of New Yorkers. We show the world the beauty of the diversity of our hometown. Thank you for your contributions to this amazing experiment we call New York City,” wrote Mayor Adams in a statement posted on Instagram.

The same day New York City Mayor’s office wrote on Twitter they are “proud that many Kazakh brothers and sisters have chosen to live in New York City.” “From bringing business and cooperation to understanding the power of education, your community is rich, and we thank you for your contributions,” reads the office’s post. 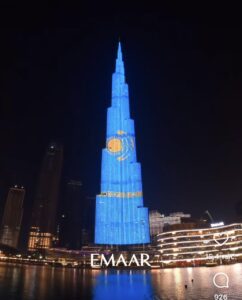 The flag of Kazakhstan also adorned the highest skyscraper in Dubai’s Burj Khalifa with the national anthem playing in the background. “Wishing its [Kazakhstan’s] people prosperity and peace,” reads the Instagram post of the skyscraper.

The celebrations were received from beyond the Earth, as the Russian crew of the 68th long-duration expedition congratulated the Kazakh people on Republic Day from the International Space Station (ISS).

In a video posted on the Facebook page of the Baikonur Special Representative Office, Dmitriy Petelin, Anna Kikina and Sergey Prokopyev shared their warm wishes with the people of Kazakhstan.

“Together Russia and Kazakhstan are making great efforts to develop mutually beneficial, good-neighborly relations between our states and cooperation in the space sector unites us even more. On this festive day, allow me to wish you peace and kindness, happiness, and well-being, dear people of Kazakhstan. May Kazakhstan be prosperous and better every day,” said cosmonaut Prokopyev in a video.

The crew of ISS-68 was launched from Baikonur cosmodrome on Sept. 21 and will work in the ISS for the next six months. 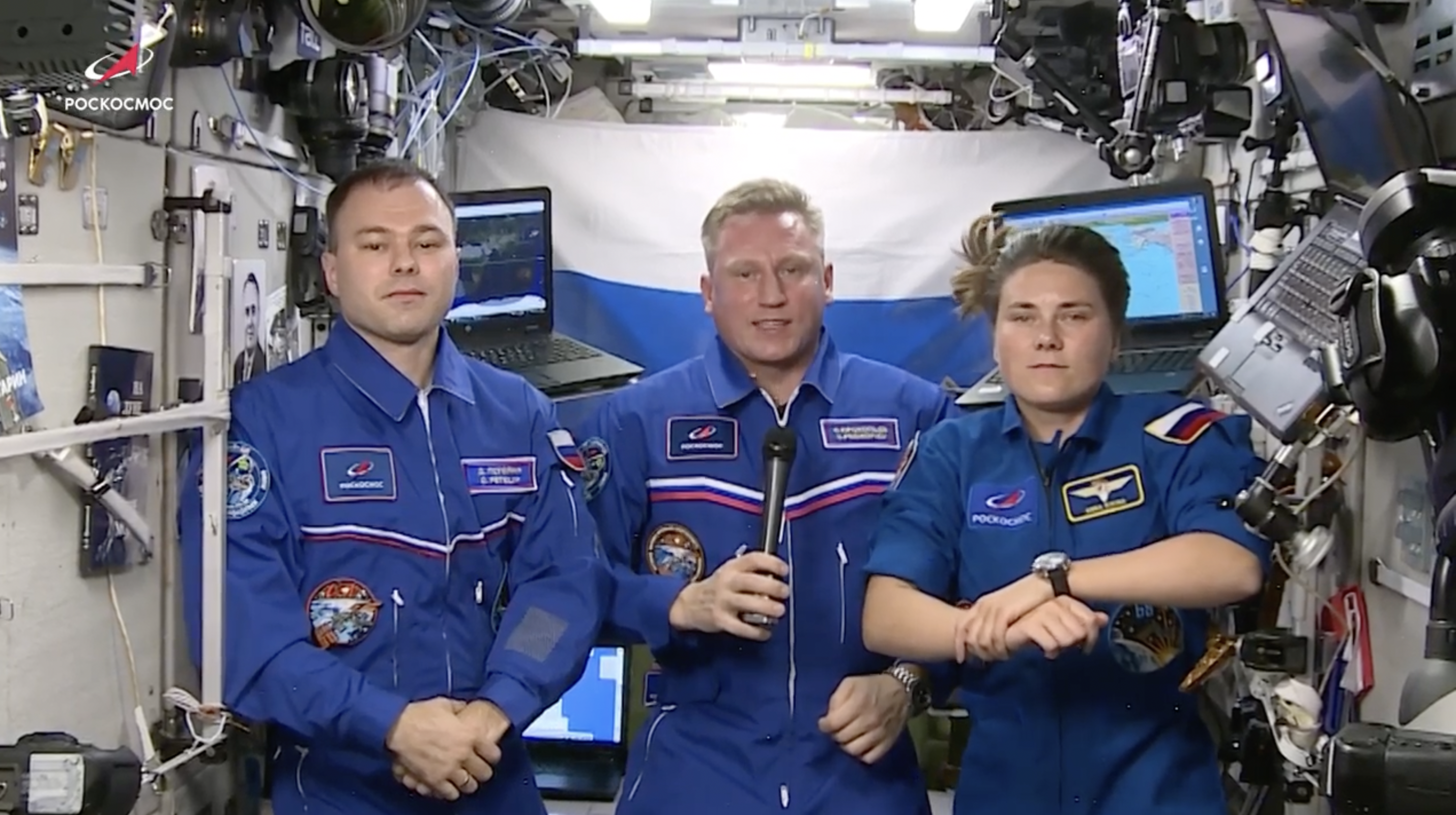 Republic Day marks the date of the adoption of the Declaration on the State Sovereignty of the Kazakh SSR (Soviet Socialist Republic) in 1990. The declaration represents the country’s first step toward its independence.

The date was celebrated in Kazakhstan until 2009 and re-established this year as a national holiday following President Tokayev’s proposal to revive the date during the first National Kurultai (Congress) on June 16.