By Zhanna Shayakhmetova in International on 14 October 2022

ASTANA – The Council of Heads of State of the Commonwealth of Independent States (CIS) reaffirmed the importance of the CIS and expressed readiness to strengthen multilateral cooperation at the meeting in Astana on Oct.14. 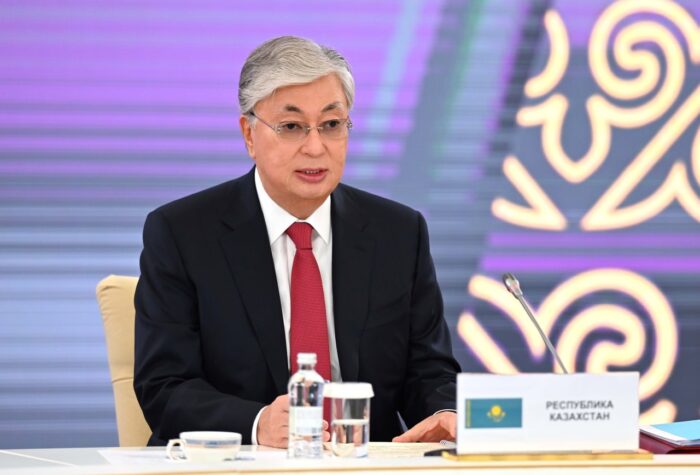 President Kassym-Jomart Tokayev took part in the meeting of the Council of Heads of State of the CIS Member States in Astana on Oct. 14. Photo credit: Akorda.

The council meeting chaired by President Kassym-Jomart Tokayev became one of the high-profile events held this week along with the sixth summit of the Conference on Interaction and Confidence Building Measures in Asia (CICA) and the Central Asia – Russia summit.

The meeting became one of the high-profile events held this week along with the sixth summit of the Conference on Interaction and Confidence Building Measures in Asia (CICA) and the Central Asia – Russia summit.

It should be noted that the heads of almost all CIS countries took part in the major event in person for the first time in the post-pandemic period.

Tokayev described the meeting as productive in his welcoming remarks. “In addition to the adoption of documents, the heads of delegations discussed the wide range of issues related to the cooperation within the CIS and the issues related to the international agenda. The constructive proposals and documents will contribute to further development and improvement of cooperation in the CIS and meet our common goals,” he said.

Kazakh Minister of Foreign Affairs Mukhtar Tileuberdi, who took part in the media briefing, spoke about the major outcomes of the meeting.

“Kazakhstan considers the deepening cooperation in the CIS as one of the priorities of its foreign policy,” Tileuberdi said. “Kazakhstan has been at the forefront of the organization. On Dec. 21, 1991, a declaration featuring the goals and principles of the Commonwealth of Independent States was adopted in Almaty. This document serves as a foundation for multilateral integration cooperation.”

The joint efforts of the CIS countries have served to develop effective cooperation mechanisms and created a regulatory legal framework in almost all areas of cooperation over the years.

As a result of the meeting, the CIS heads of state decided to intensify work on the draft agreement on free trade in services, organizations, and investment activities to deepen trade and economic cooperation.

Cooperation in the cultural and humanitarian sectors was also named as a priority area.

St. Petersburg received the status of Cultural Capital of the CIS in 2023.

The heads of state also touched upon cooperation in the climate sphere to address climate change issues.

The CIS heads of state approved the program of cooperation in combating terrorism and extremism for 2023-2025.

It was agreed to hand over the chairmanship in the CIS to Kyrgyzstan in 2023 and co-chairmanship to Russia and Kazakhstan. The next Council of Heads of State of CIS will be held on Oct. 13, 2023, in Bishkek.