By Staff Report in Business, International on 7 October 2022 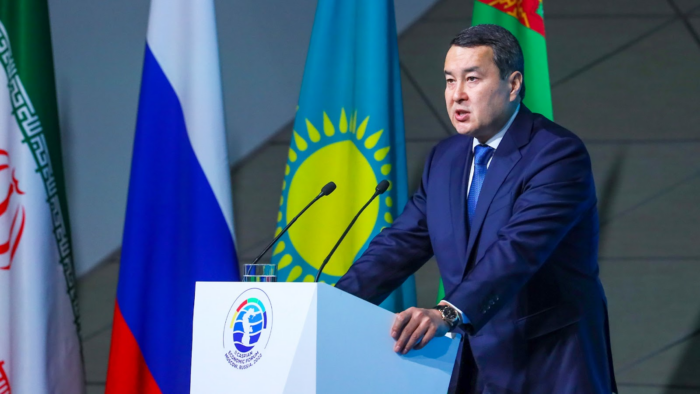 “Kazakhstan plans to establish cross-border hubs to increase the potential of the North-South and East-West transport corridors. These are the seaports of Aktau and Kuryk, the Khorgos dry port, the Central Asia International Industrial Cooperation Center, and others,” Smailov said.

According to him, these hubs, including the Caspian food hub proposed by President Tokayev, will expand trade flows into the Caspian countries and the international market. The countries need to improve the region’s transport connectivity to achieve this.

Smailov suggested that the Aktau port serve as a center on the India-Gulf countries-Iran-Kazakhstan-Russia route.

Kazakh PM also mentioned the creation of a roadmap to eliminate “bottlenecks” on the Trans-Caspian International Transport Route that will lead to the expansion of freight flow between Europe, Central Asia, and China.

Smailov stressed that raw material extraction, depletion of biological resources in the sea, and freight transit have negatively impacted the environment. He called on the forum participants to back the resumption of the Caspian Environmental Program.

The Caspian Economic Forum (CEF) is the largest platform for discussing cooperation among the countries of the Caspian region, primarily Kazakhstan, Azerbaijan, Iran, Russia, and Turkmenistan, otherwise known as the Capsian five, and representatives of Belarus, Uzbekistan, and Kyrgyzstan. The forum focuses on the development of trade and economic ties and transport and logistics infrastructure.