ASTANA – President Kassym-Jomart Tokayev met on Sept. 28 with heads of technological and IT companies who arrived in Astana to attend the two-day Digital Bridge Forum, a key event with a program featuring some of the biggest names in the IT industry, reported the presidential press service. 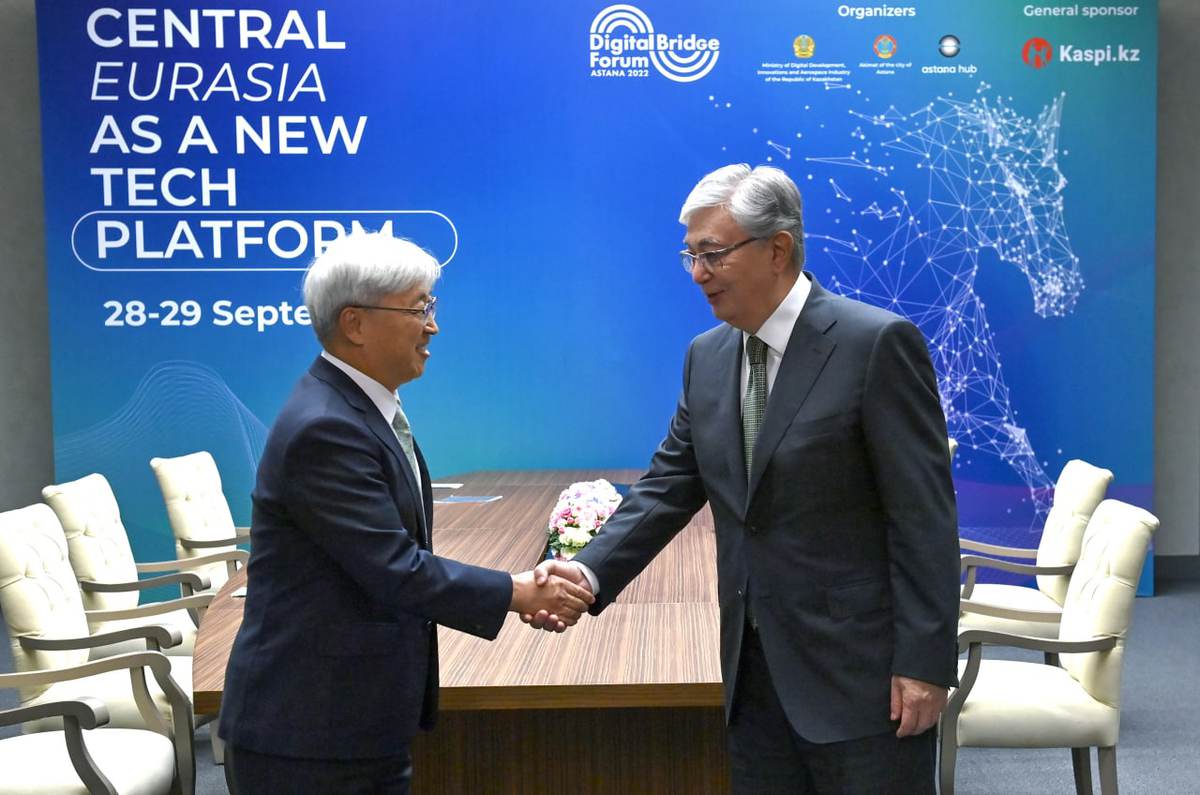 Present since 1996 in Kazakhstan, Samsung offers its innovative solutions and products for domestic consumers and the corporate sector. Photo credit: Akorda

Organized this year under the theme Central Eurasia as a New Tech Platform, the forum seeks to build a new digital bridge between Europe and Asia by bringing together technoparks from the region and open new opportunities for collaboration and an experience exchange for all those involved in the promotion of digital ideas in the region.

President Tokayev and Samsung Electronics Corporate President In Yong Rhee spoke about the opportunities for training IT specialists, conducting joint research work, and cooperation in the scientific sphere.

Arsen Tomsky, the founder of inDriver, one of the world’s fastest-growing transportation service companies, spoke with Tokayev about development prospects for inDriver in Kazakhstan. The company’s unique selling point is that it enables customers to negotiate the price of their ride with the driver. Available in over 646 cities in 45 countries, it is one of the most popular services in Kazakhstan. 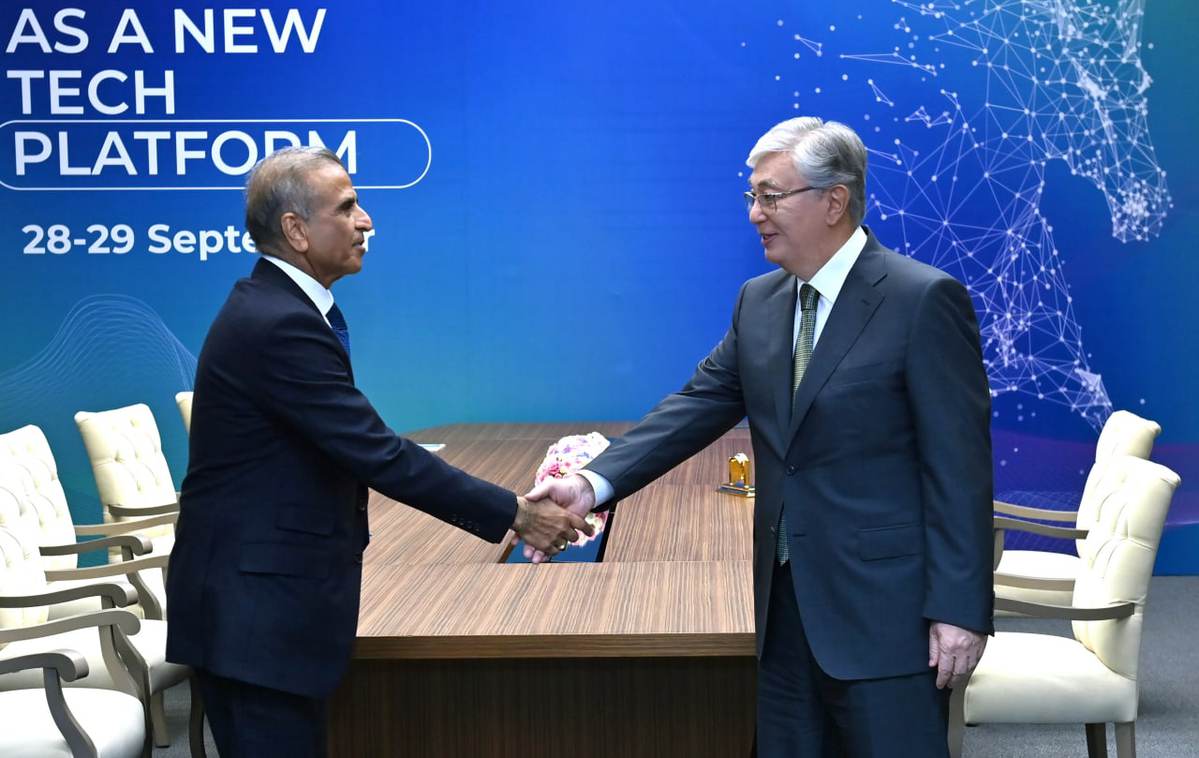 According to Tomsky, whose book “InDriver: from Yakutsk to Silicon Valley” was recently released in the Kazakh language. Two offices have been opened in Astana and Almaty, and inDriver has also become a resident of the Astana Hub. He shared his plans to create the Spark digital university and implement several non-profit projects aimed at supporting young people, a goal voiced by Tokayev as he addressed the forum’s plenary session later that day.

“Today I was honoured to be a keynote speaker at Digital Bridge in Astana, the main tech conference in Central Asia. I had the opportunity to meet with his excellency President of Kazakhstan, Mr. Tokayev, and told him about inDriver’s plans for our human capital development programs,” Tomsky said in a tweet.

During a conversation with Mansur Ibrahim Al Mansouri, chief operating officer at G42, an Abu-Dhabi-based artificial intelligence and cloud computing company, the sides focused on expanding cooperation in the field of information technology and digital security. Al Mansouri spoke about his company’s plans to implement joint projects in the areas of artificial intelligence, big data analysis, and cloud infrastructure. Tokayev, in turn, stressed the strategic importance of human capital development in AI and IT for Kazakhstan. 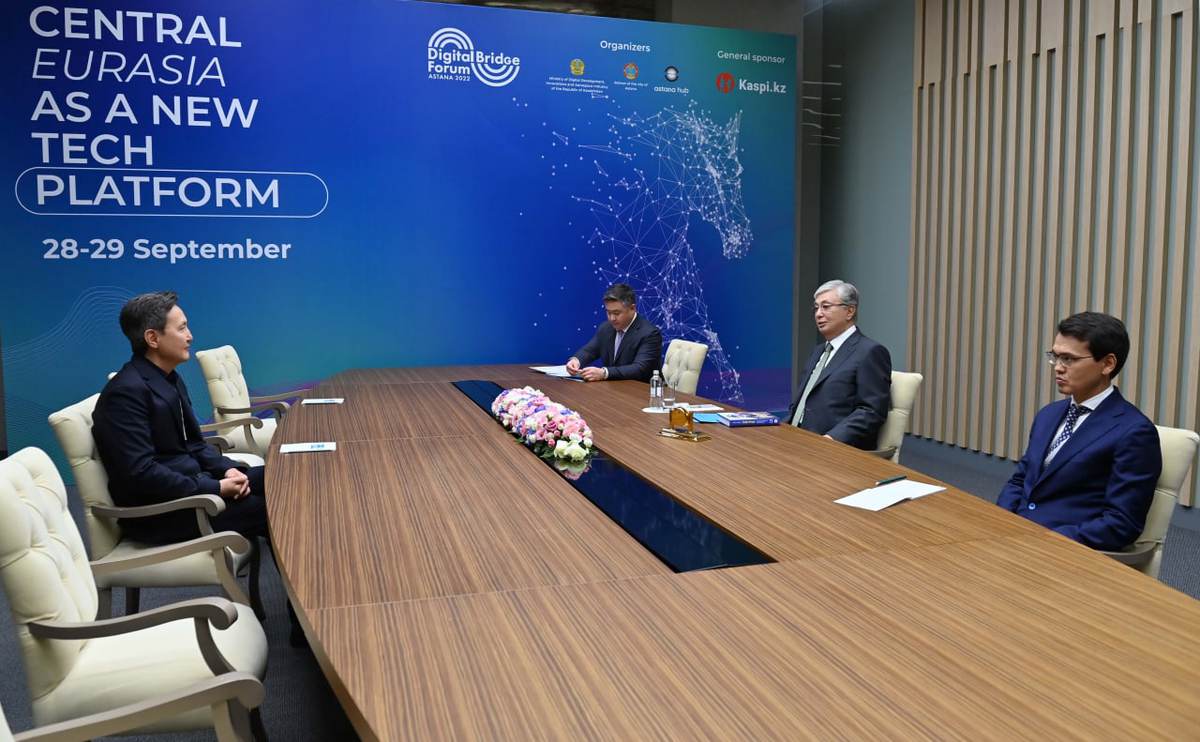 InDriver is one of the companies who confirmed their plans to relocate to Kazakhstan. Photo credit: Akorda

Sunil Barty Mittal, founder and chairman of Bharti Enterprises and OneWeb, addressed the use of low-orbit satellites and a network of ground stations to provide internet coverage to remote communities during his meeting with Tokayev. Last year in November, OneWeb signed a letter of intent with Kazakhstan’s Ghalam to collaborate on opportunities for the local production of components for the second generation of OneWeb satellites in the country, part of One Web’s efforts to expand its presence in Kazakhstan and into the broader Central Asia market.

The same day, Tokayev delivered remarks at the plenary session of the forum, outlining five priorities in the country’s digital transformation path, making it more human-centered, developing human capital, and creating favorable conditions for the IT industry. 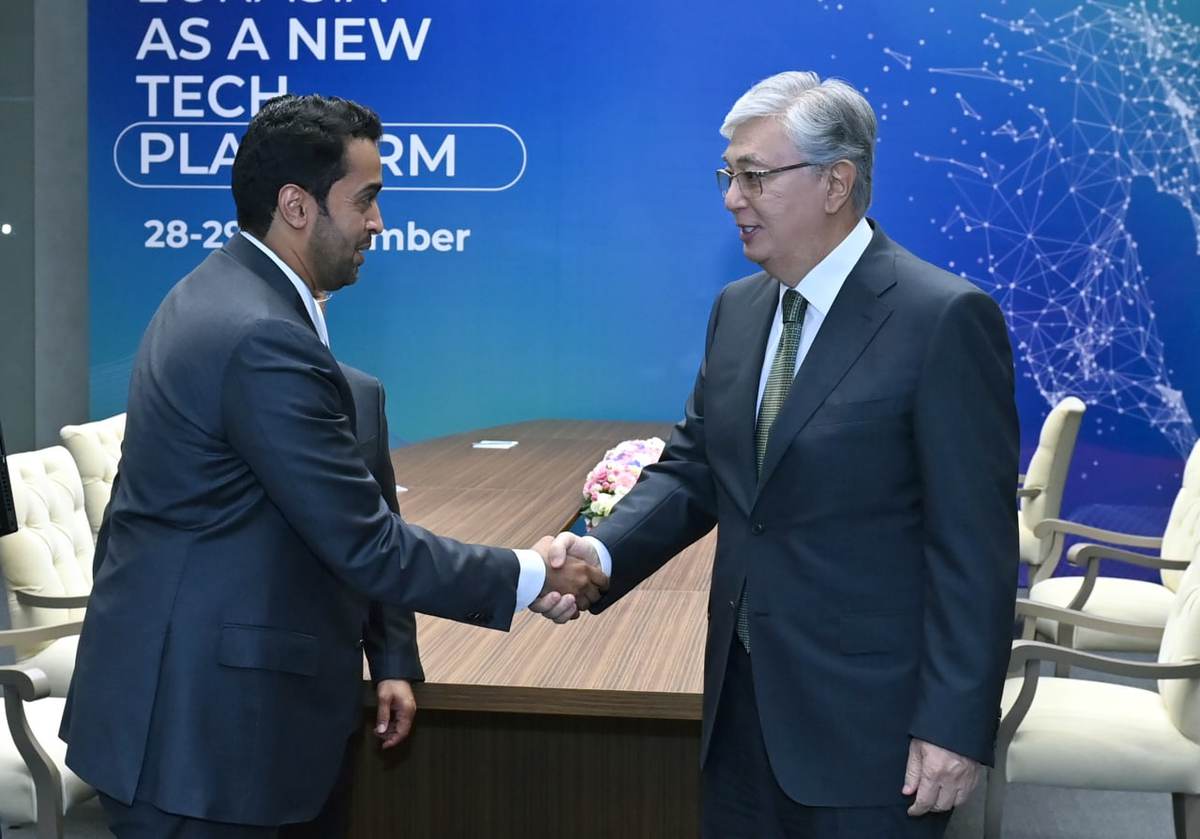 On Sept. 29, G42 and the Kazakh Ministry of Digital Development, Innovation and Aerospace Industry signed a memorandum of understanding to collaborate on government use of big data analytics, cloud, and AI among other digital technologies. Photo credit: Akorda

IT sector development was the focus of Tokayev’s meetings during his recent visit to New York, where he met with some of the world’s leading IT companies, discussing plans for greater collaboration. Their expertise might be applied in the country’s ambitious goals, including training at least 100,000 IT professionals and raising IT exports to $500 million by 2025.