By Dana Omirgazy in Nation on 30 September 2022

ASTANA – Since the beginning of the year, nearly $417.5 million were invested in the Abai region, said President Kassym-Jomart Tokayev during a Sept. 30 meeting with the public of the region in Semei, reported the Akorda’s press service. 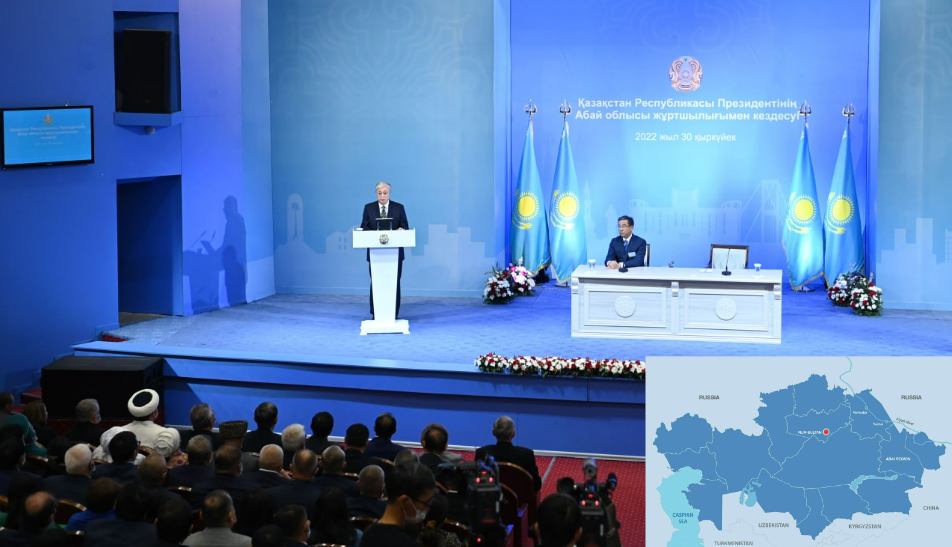 Tokayev during meeting with the public of the Abai region on Sept. 30. Photo credit: Akorda press service

“Considering the people’s wishes, I established a separate region. This step will enable a quick resolution of social and economic issues and contribute to the overall well-being of local citizens. It is also a sign of tremendous respect for Abai, as the recently created region is named after him,” Tokayev said.

The president highlighted the region’s tremendous transit potential, proposing the construction of a dry port, logistics park, and development of transportation corridors. Semei, the region’s administrative center, used to be a vital hub of international transit trade. Today, the region connects the country’s eastern districts, bordering Russia and China. Tokayev urged the government to take advantage of these vast transport, logistical, trade, and economic opportunities.

“We intend to establish a railway line from Bakhty to China to boost our country’s transportation potential,” he said.

Tokayev instructed his government to conduct road infrastructure repairs, including the restoration of two city bridges and the construction of a new one within the next three years.

The President noted the region’s untapped subsoil potential. According to Tokayev, the subsoil has not been developed because of its proximity to the nuclear test site. Tokayev called for large-scale geological explorations in the region to uncover its mineral deposits. He said the development of the mining industry would allow for the revival of the region’s economy.

He expressed hope that the city of Semei will become a new destination to attract creative people, innovations, and investments like Astana, Almaty, Shymkent, and Aktobe.