By Assem Assaniyaz in Nation on 5 September 2022

NUR-SULTAN – The Kostanai Region declared a state of emergency on Sept. 4 after forest fires burned a record 43,000 hectares (the size of Сarribean Barbados’ island) and forced an evacuation of 1,841 people. 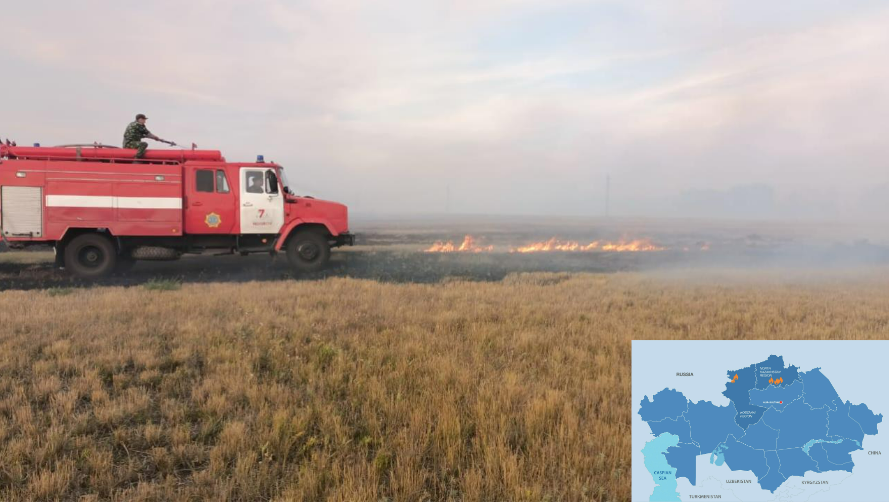 President Kassym-Jomart Tokayev arrived in the region today. The President held a meeting with the operational headquarters, where he learned about the efforts made to put out wildfires, evacuate residents from villages, and assist victims.

Forest fires began to spread rapidly in the Auliekol district on Sept. 2, caused by heatwave and gusty winds up to 20 meters per second, according to the Kazakh Ministry of Emergency Situations. At least, 108 buildings were damaged or destroyed.

More than 1,520 firefighters with 196 units of equipment, seven aircraft, and five fire trains are fighting the fire.

“There are three combat areas in place to prevent the spread of fire to the settlements. Three aircraft are currently in service, with three more equipped with water-draining mechanisms expected to combat fires,” said Minister of Emergency Situations Yuriy Iliyin at the Sept. 4 press briefing.

The fires also incurred injuries, burns, and poisoning of mild and moderate severity to ten people and killed an 86-year-old man.

“He was notified about the evacuation measures but refused to evacuate. Investigative measures on the fact of the death of a person will be carried out,” the minister explained.

Local executive authorities provided 66 citizens with shelter and food in the schools of the Auliekol village. Others were placed with relatives or returned to their homes as the situation gradually stabilized.

On arrival in the Kostanai Region, President Kassym-Jomart Tokayev flew over the territories affected by fires in the Auliekol district. Photo credit: presidential press service