Kazakhstan: A Bridge Between West and East

By Kassym-Jomart Tokayev in Congress of Leaders of World and Traditional Religions, Op-Ed on 15 September 2022

Editor’s note: As Kazakhstan hosts on Sept. 14-15 the Congress of Leaders of World and Traditional Religions, influential U.S. magazine National Interest published an article by President of Kazakhstan Kassym-Jomart Tokayev where he dwells on the significance of the two-day congress amid rising global tensions. 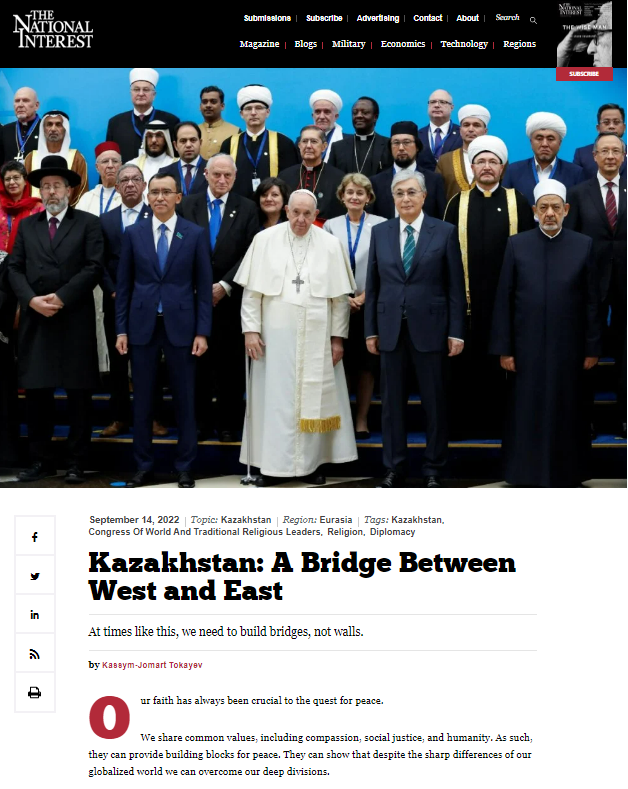 At times like this, we need to build bridges, not walls.

We share common values, including compassion, social justice, and humanity. As such, they can provide building blocks for peace. They can show that despite the sharp differences of our globalized world we can overcome our deep divisions.

This is the core message of the 7th Congress of World and Traditional Religious Leaders that is taking place this week in our capital. Kazakhstan will once again bring together religious leaders from around the world. For the first time ever, this year’s summit includes His Holiness, Pope Francis.

Since 2003, this forum has provided an invaluable platform for some very significant and, at times, very difficult conversations. Back in 2003, following the terror attack of 9/11, high levels of religious tensions globally created a dire need for positive engagement. I was a vocal advocate for this forum and worked to establish it in Kazakhstan.

I was raised to believe that religious differences are not an obstacle to harmony. As a Muslim child in Almaty, my formative memories were forged in diverse homes, and with families and friends of different faiths. My experience was not unique. This was and is our culture.

Perhaps it derives from being a cultural and religious land bridge across the heart of Eurasia. As children, we took it for granted. As adults, we came to appreciate the importance of this shared perspective. From there, it was a natural step to a global forum advancing a culture of tolerance.

In those first years, the Congress facilitated engagement between Christian, Islamic, Jewish, Buddhist, Hindu, and other faith leaders. It helped mend the religious wounds but also address the conflict and extremism which followed 9/11.

This year, the summit comes at a similar time of global uncertainty and instability.

As well as facing new wars and conflicts, we must also contend with an accelerating climate crisis, a receding global pandemic, food and energy shortages, and widespread economic uncertainty.

In these difficult times, we hope that this summit can provide the platform for the world’s religious leaders to come together once again to play a leading role in advocating for unity. After all, is it not their role to bridge, to soothe, to heal, to practice mercy, compassion, and demonstrate concern for all humanity?

I also hope that religious leaders will make a unified call to restore peace and security in our broader region. As the host of this forum, Kazakhstan supports these efforts. It is critical to restore confidence and trust in the heart of Eurasia. At times like this, we need to build bridges, not walls. We invite the parties to any crisis to come to the table in Kazakhstan for dialogue. Violence and hatred are not what God wants.

There is no alternative and no shortcut.  Our country is home to seventeen major religions and over 100 ethnic groups. Our national identity is built on unity in diversity, dialogue, tolerance, acceptance, and empathy.

That is why we have hosted international talks in recent years on Iran’s nuclear program, on the conflict in Syria, and on the legal status of the Caspian Sea.

Of course, we are not the only country to take this approach to religious tolerance or to promote dialogue, mediation, and diplomacy. But we need more countries to do so. So, cognizant of both our heritage and our responsibility, we are ready to build bridges and provide platforms for dialogue whenever and wherever the cause of peace needs it.

Kassym-Jomart Tokayev is President of the Republic of Kazakhstan.

This article was originally published in The National Interest.