By Kassym-Jomart Tokayev in Op-Ed on 20 September 2022

Editor’s note: President Kassym-Jomart Tokayev arrived on Sept. 19 in the United States where he is expected to address the General Debate at the 77th session of the United Nations General Assembly. Не is also meeting top executives of leading American companies and top management of financial institutions to intensify cooperation with Kazakhstan and brief them on the ongoing political and economic reforms in the country. The article written by President Tokayev and published in Politico, an influential U.S. magazine, provides a grasp of how Kazakhstan sees its development moving forward. 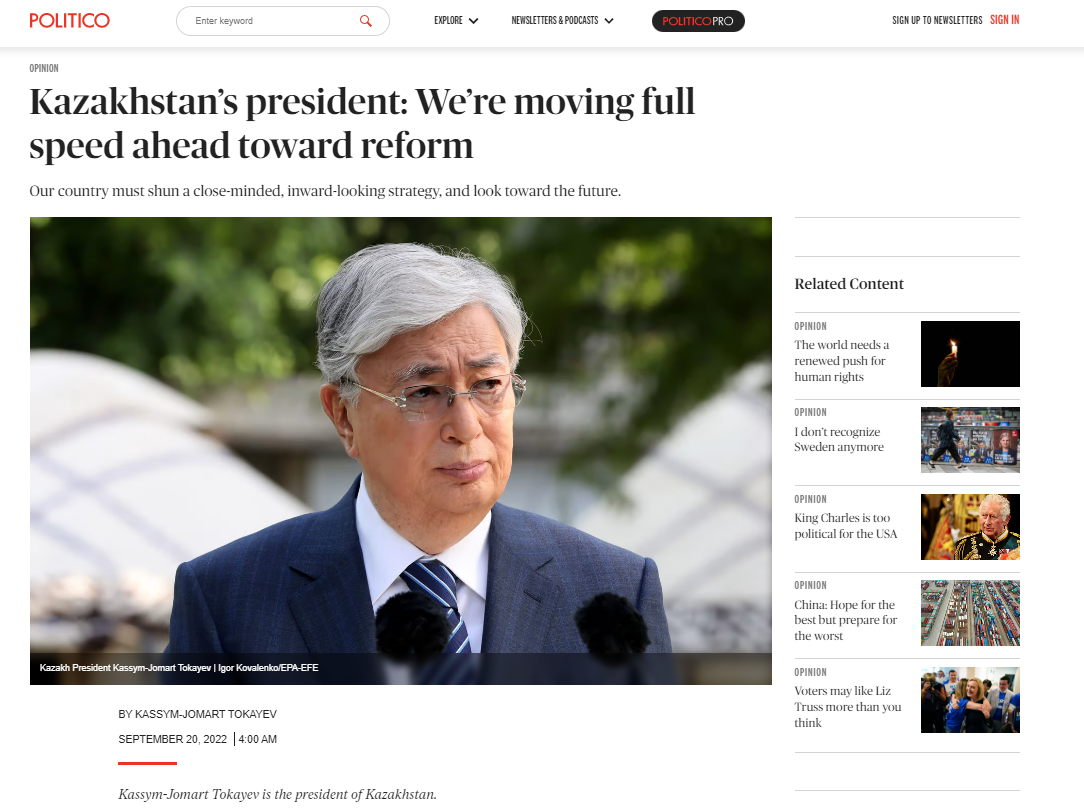 Our country must shun a close-minded, inward-looking strategy, and look toward the future.

In a state-of-the-nation address earlier this month, I announced I would seek a democratic mandate to implement a vision for a fairer, more open Kazakhstan. And as my country heads to the polls in the coming months, I believe we must resist the instinct to turn inward amid these turbulent global times.

There is simply no viable alternative to globalization, interdependence and the international rules-based order. And while efforts to reduce dependence and improve resilience are wholly understandable — and in many cases sensible — there’s a delicate line to tread, as this mustn’t lead to a broader reversal of all that has enabled global prosperity in past decades.

We have a duty to mitigate risk and reduce fragility in the global system, and we must seek to achieve this by strengthening cooperation — not rejecting it.

I say this as the leader of a country that finds itself on the front line of the threats posed by global fragmentation.

Throughout our history — and particularly since our independence — we’ve always taken the view that disagreements with neighbors must be approached constructively, and they need not lead to a breakdown in communication, cooperation or trust.

As a result, Kazakhstan, and Central Asia more widely, provide a strong case study of major powers’ ability to work in alignment, in pursuit of their interests that are to the benefit of the region’s people.

Moreover, we believe that such principles of openness and cooperation are just as valuable in the international sphere as they are domestically. Indeed, this spirit has defined the path of internal reform that my administration has set out.

And even in the face of major international pressures, which have created difficulties in our country — and others — we won’t turn inward or opt for isolation.

Instead, we are doubling down on the liberal, international, open policies that have driven such a dramatic increase in standards of living around the world.

My country is at a crossroads. If we fail to answer the critical questions that face us at this juncture, we risk falling into the “middle income trap” and, in the process, disappointing an entire generation of optimistic, energetic and ambitious young citizens.

Two weeks ago, I put forward a plan to parliament for a “Just and Fair Kazakhstan.” The plan aims to decentralize decision-making, strengthen rule of law, increase international competitiveness, and ensure equal opportunities for every citizen.

It aims to fundamentally reshape our political order and leave behind the “super-presidential” system, which is no longer the most effective governance model for our nation’s ambitions.

Instead, we are decentralizing and distributing power throughout the nation, strengthening the role of parliament and local authorities.

We’re ushering in a new era of pluralism by abolishing constraints on the registration and formation of political parties.

And I have also initiated a single 7-year presidential term, as I believe this is a real breakthrough in developing democracy in Kazakhstan and modernizing it as an advanced country. To date, no state in our part of the world has taken this bold step.

All of these changes are helping us move toward a new model — a model of a presidential republic with a stronger parliament and more accountable government.

This is nothing less than a full transformation of our national politics. Therefore, to move forward with this reform, a strong mandate is needed.

This is why I’ve decided to call a presidential election this autumn and to introduce legislation preventing all future presidents from serving more than one term.

Some observers will question whether we can implement such ambitious reforms. However, all historic change has required political courage and sacrifice. And I am well aware of the scale of this challenge.

I also believe that our national mindset has undergone a dramatic shift in recent years, driven by deep social change, by the economic and security crises we have found ourselves at the center of and, most of all, by the recognition that we must build a country that is fairer and serves every citizen.

We’ve realized that if we want to avoid stalling, we must accelerate and move full speed ahead toward reform.

This doesn’t mean we will be reckless or naive — quite the opposite. We’re moving forward at speed, but in a considered and deliberate way. And this applies to both our domestic and international approaches.

I believe we can only move forward by recognizing that every problem — whether from a state or global perspective — is a shared problem. And we can only respond to these common challenges with cohesive, participatory responses.

Just as we are tackling the issues of fair distribution, national development, and economic diversification through greater openness and the decentralization of power in Kazakhstan, we must also work together internationally to meet the challenges of climate change, food security and energy security. Kazakhstan can and will play a part in addressing all these global issues, as I will set out in my address to the U.N. General Assembly.

At this critical turning point, both nationally and globally, we must draw the right lessons from recent crises, and seek to renew and strengthen our current path — not abandon it in favor of a close-minded, inward-looking approach.

Kassym-Jomart Tokayev is the President of Kazakhstan.

This article was originally published in Politico.