By Assel Satubaldina in Congress of Leaders of World and Traditional Religions, International on 13 September 2022 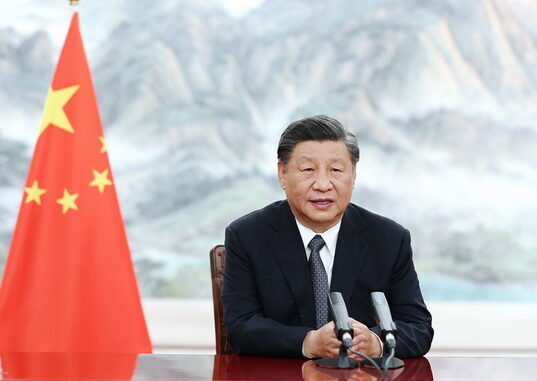 “Our people, sharing a thousand-year history of friendly contacts, are witnesses to the brilliant era of the Great Silk Road. Tang Monk Xuanzang [a seventh-century Chinese Buddhist monk, scholar, traveler, and translator] and Ming envoy Chen Cheng [a Chinese diplomat of the 13-14th century known for his overland journeys into Central Asia during the Ming dynasty] once reached the Kazakh land. Well-known Kazakh figures, such as ‘Aristotle of the East’ Al-Farabi, and the great poet Abay Kunanbayev, became famous in China. The peoples of our countries still keep good memories of them to this day,” wrote Xi Jinping.

Xi Jinping, who is likely to be re-elected for a historic third term at his party’s congress in October, plans to travel to Kazakhstan on Sept. 14 and then to Uzbekistan for the Shanghai Organization of Cooperation summit, in what would be his first trip abroad since the pandemic hit more than two years ago.

“As part of my upcoming visit, I am ready to discuss with President Kassym-Jomart Kemelevich Tokayev how to advance the China-Kazakhstan eternal comprehensive strategic partnership in the new era, expand and optimize bilateral multifaceted mutually beneficial cooperation, so that, guided by the common destiny of China and Kazakhstan, to form a new paradigm for bilateral relations,” he wrote.

This year is also when Kazakhstan and China celebrate 30 years since the establishment of diplomatic relations demonstrating a “great example of coexistence and the development of good neighborly relations.”

It was also in the Kazakh capital Nur-Sultan in 2013 that Xi Jinping launched the Belt and Road Initiative (BRI), reaffirming Kazakhstan’s crucial role in China’s regional and broader geopolitical objectives.

Thirty years have been a “period of very productive bilateral cooperation and significant strengthening of infrastructural interconnectedness,” according to Xi Jinping.

“Our countries always firmly support each other on the key issues of state sovereignty, security, and territorial integrity, respect each other’s development path independently chosen in accordance with national realities, and welcome the other side’s new achievements in state development and national revival. China and Kazakhstan are trusted friends and proven partners, and our nations will always stand by each other,” he wrote.

Despite the COVID-19 pandemic, bilateral trade in 2021 returned to pre-pandemic levels and reached $25 billion. The two countries have a list of 52 joint projects worth more than $21.2 billion, including the 100-megawatt Zhanatas wind farm, the JAC car assembly line, and the modernization of the Shymkent refinery.

Commending a multidirectional and multimodal infrastructure network that covers the road, rail, air transport, and pipelines, the Chinese leader said China and Kazakhstan are working to create a highly efficient and convenient multimodal transport artery in the vast Eurasian space.

“Lianyungang, the Sino-Kazakh logistics terminal, opens up access to the sea for Kazakhstan’s goods. China-Europe freight trains that transit through Kazakhstan contribute to the diversification of delivery routes and play a significant role in ensuring the continuity of global supply chains and industries,” he wrote.

Building on 30 years of strategic partnership, Xi Jinping sees the future of bilateral relations in continuing the course of good-neighborliness and friendship, expanding trade and investments, including through China’s BRI, and protecting what he called “our common security.”

“In a challenging international and regional situation, ensuring solidarity and deepening cooperation has been and remains a tool for overcoming the crisis and solving security problems,” he added.

He confirmed China’s readiness to expand cooperation with Kazakhstan on law enforcement, intelligence, and defense, and advance the implementation of the Data Security Cooperation Initiative between China and the Central Asian states, among other areas of cooperation.

Why is Xi’s visit to Kazakhstan significant?

Kazakh experts agree Xi’s visit underlines China’s strategic ties with Kazakhstan and other Central Asian states in light of the tense geopolitical situation in the region and at a time when relations with many Western nations have come under strain.

For China, the implementation of transport and logistics projects through Kazakhstan is one of its strategic priorities, according to Aidar Kurmashev, head of the international and geoeconomic research department at the Kazakhstan Institute for Strategic Studies.

“First of all, technology transfer and expansion of investments are of particular importance for Kazakhstan. China is already one of the leaders in terms of investment in our economy, but given China’s booming economy, its efficiency, and level of its diversification, it is also important for Kazakhstan to adopt the experience and mechanisms of economic development in specific industries. We expect that the agreements of the heads of states will build a framework for future, closer cooperation between state bodies on the development of specific production niches,” said Kurmashev.

Political expert Adil Kaukenov has high hopes for the visit saying that important projects will be inked. The COVID-19 pandemic, he noted, has exposed the importance of high-level relations.

“Since this will be President Xi’s first visit after the pandemic started, we are expecting some kind of surprise in the sense that some important projects will be proposed that will breathe life into our relations. Especially because Kazakhstan is at a new stage of its development after President Tokayev proposed several reforms in his address. China’s support of economic reforms through the multiplication of commodity turnover and new investments, will be very timely,” said Kaukenov.