NUR-SULTAN – President Kassym-Jomart Tokayev met with Chinese President Xi Jinping in Akorda on Wednesday, who is making his first foreign visit since the start of the pandemic, announced the Kazakh presidential press service. 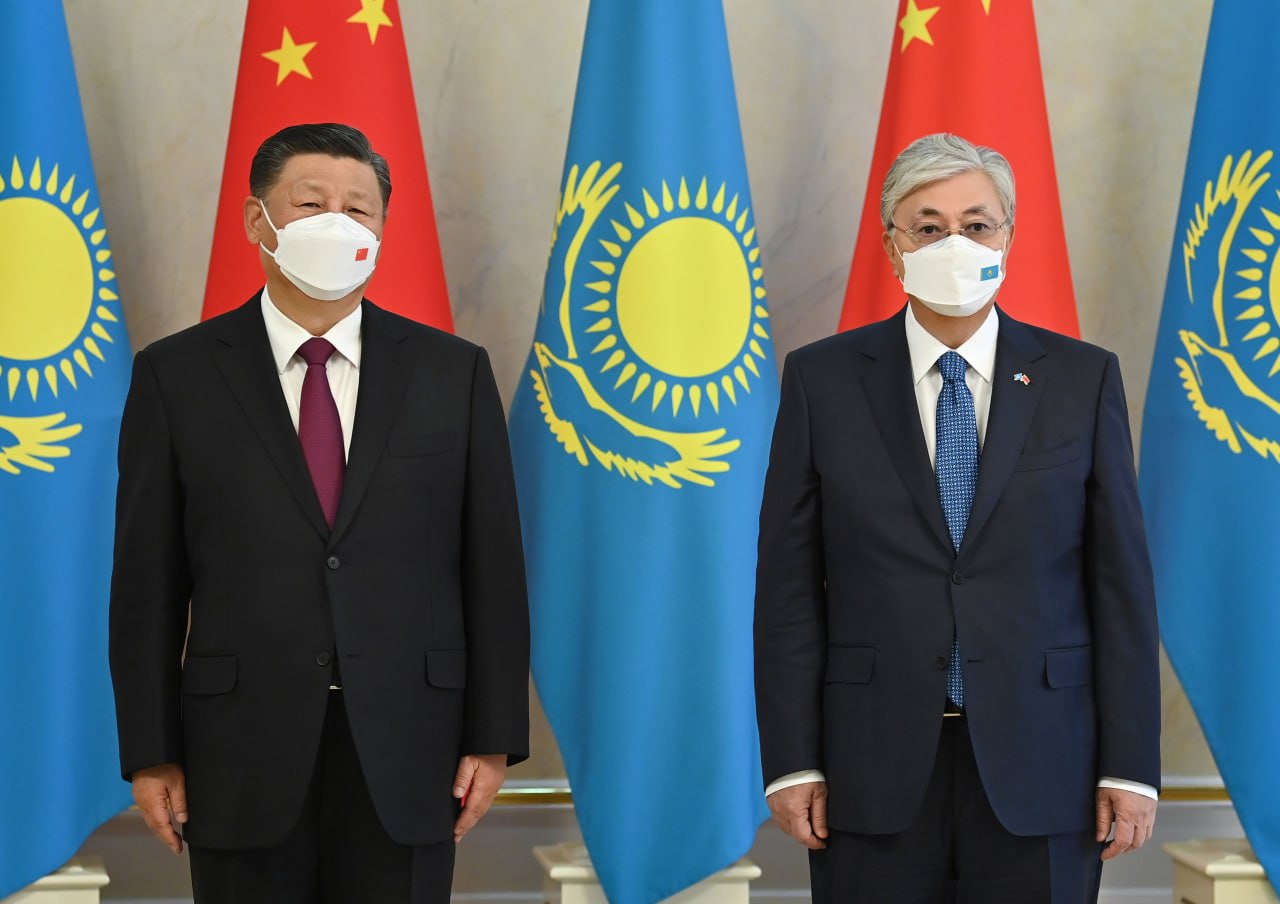 The two counterparts, who met in Beijing in February when Tokayev flew to attend the opening ceremony of the Olympic Winter Games, discussed the prospects for enhancing cooperation in transport, logistics, and agro-industry, and considered the use of transboundary water resources.

Xi, who landed in Kazakhstan in the afternoon, was warmly welcomed by Tokayev at the capital’s international airport. He was accompanied by a delegation that includes a member of the political bureau of the CPC Central Committee Yang Jiechi and State Councilor and Foreign Minister Wang Yi, who last traveled to Kazakhstan in June.

Xi and Tokayev praised the 30 years of bilateral ties. Describing the visit, Tokayev, who speaks fluent Chinese, said that it sends the message of a “high level of mutual trust and cooperation.”

“It is symbolic that your visit coincided with this anniversary milestone. During this short period, we have established strong interstate ties. I sincerely thank you for your support for Kazakhstan’s economic development and our international initiatives,” Tokayev told Xi. 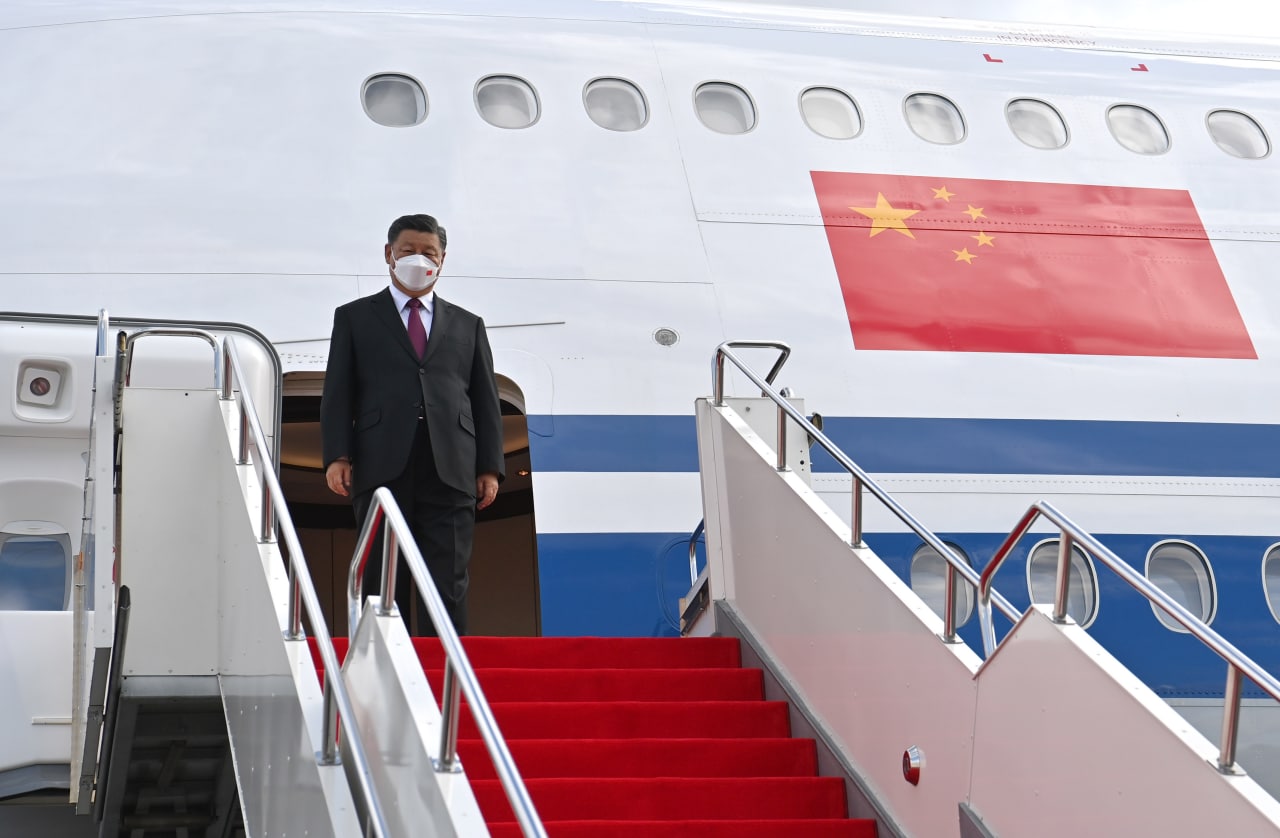 The joint statement that the two leaders adopted today will usher in a “new golden 30 years of bilateral relations,” according to Tokayev.

China is one of Kazakhstan’s biggest trade partners, accounting for 22.6 percent of the country’s foreign trade, according to data from the Kazakh State Revenue Committee.

The trade turnover reached $13.5 billion in seven months of 2022, 38.3 percent more than in the same period of 2021. This was largely driven by a 52 percent increase in exports to China, primarily exports of mineral products, fuel, and energy products.

For Xi, the choice of the destination for his first visit outside China since the start of the COVID-19 pandemic is not a coincidence, according to experts. Many have highlighted the increasingly important role Kazakhstan plays in China’s foreign policy objectives amid China’s growing tensions with Western nations. 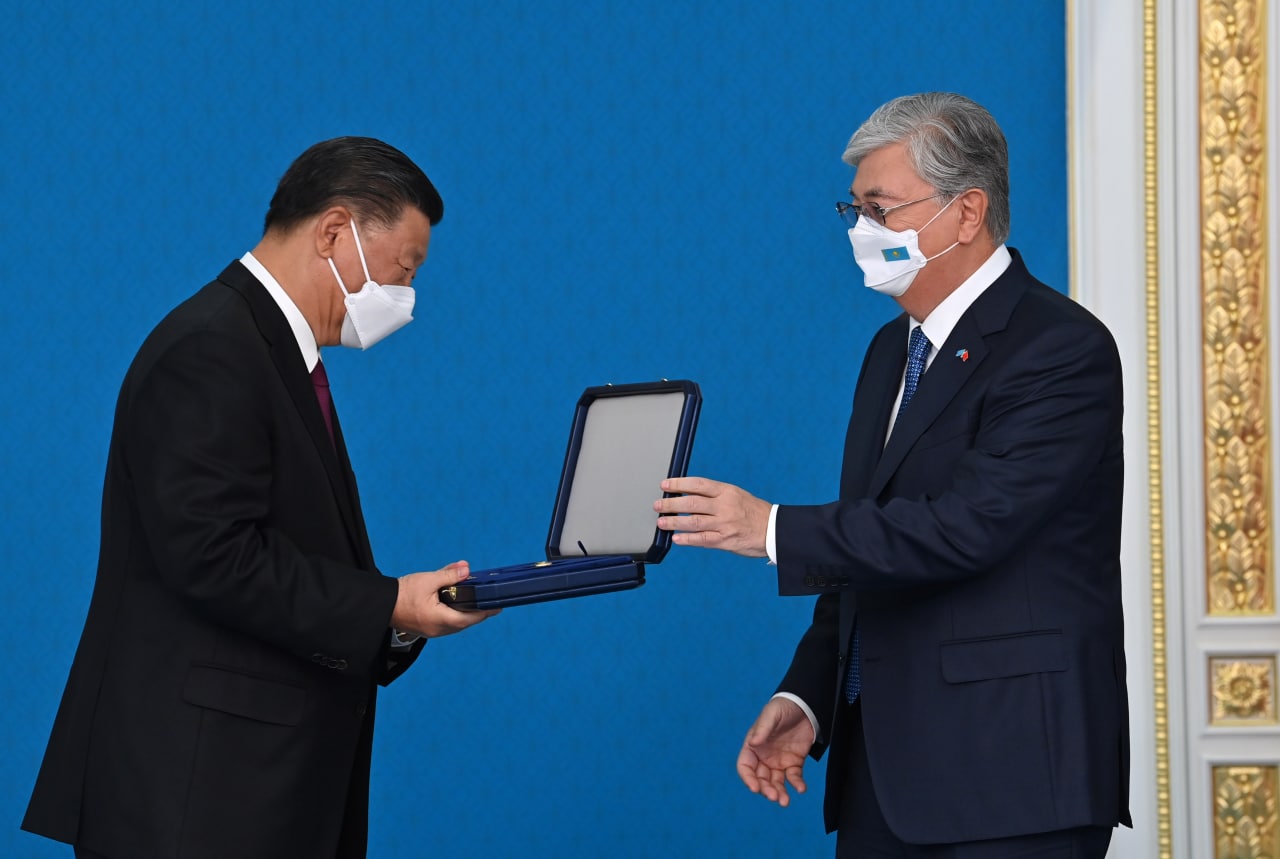 Tokayev awarded Xi with the highest state award, the Order of Altyn Kyran (golden eagle), for his special contribution to the strengthening and development of bilateral political, economic, and cultural relations between Kazakhstan and China. Photo credit: Akorda press service

“No matter how the international situation changes, we will continue to strongly support Kazakhstan in defending its independence, sovereignty, and territorial integrity, firmly support the reforms you are carrying out to ensure stability and development and oppose the interference of any forces in the internal affairs of your country,” Xi told Tokayev.

The support he was referring to was also demonstrated by Xi in January when Kazakhstan was devastated by a wave of unrest that eventually turned violent and forced the country to declare a state of emergency.

Xi is also optimistic that his visit will boost the ties between the two countries. 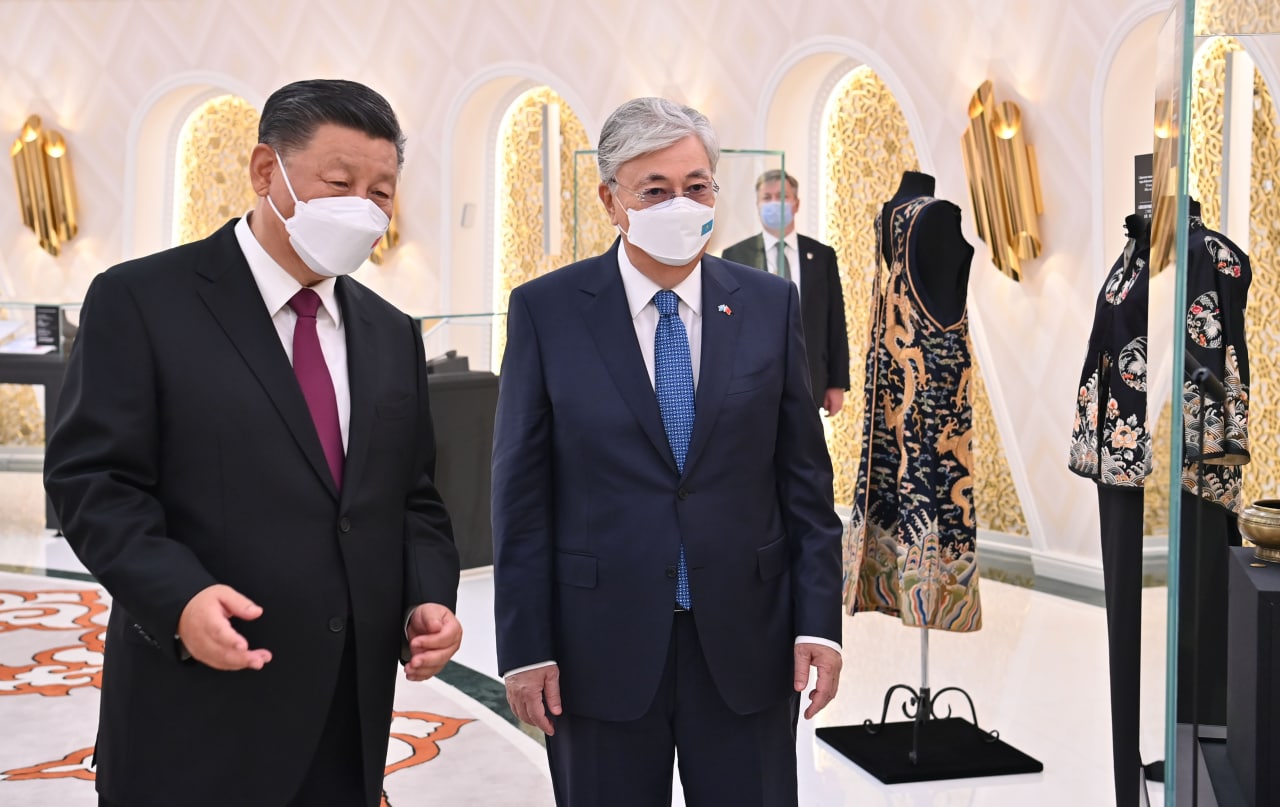 The two leaders visited the Kazakhstan – China: Dialogue of the Millennium exhibition, which demonstrates the deep historical and cultural ties between the two countries from ancient times to the present. Photo credit: Akorda press service

“Undoubtedly, under your leadership, the people of Kazakhstan will achieve new successes in state-building and national revival. Once again I would like to assure you that the Chinese government pays great attention to relations with Kazakhstan,” he said.

Xi Jinping emphasized Kazakhstan and China share a permanent strategic partnership – announced during Tokayev’s 2019 visit to Beijing, which according to the Chinese leader, is “unparalleled in Chinese diplomacy.”

For Kazakhstan, cooperation with China is a chance to capitalize on the country’s enormous progress in tech and innovations, according to Iskander Akylbayev, chief research officer at the Kazakhstan Institute of Strategic Studies.

“China is the world’s second-biggest economy. It is one of the world’s leaders in technology and innovations. In terms of this and the transfer of new ideas, China is very important for us. If we use it right, it will benefit us – research and development, education, science,” he said in an interview with a local TV channel.

Following their meeting, Tokayev awarded Xi with the highest state award, the Order of the Altyn Kyran (golden eagle), for his special contribution to the strengthening and development of bilateral political, economic, and cultural relations between Kazakhstan and China.

Following the completion of negotiations, Tokayev and Xi inspected a special exhibition of artifacts reflecting millenia-long contacts in material and intangible cultures of the peoples of Kazakhstan and China.

After that Tokayev bid farewell to his Chinese counterpart in the airport, as Xi went on the second leg of his trip in Samarkand to attend the Shanghai Cooperation Organization (SCO) summit. The back-to-back state visits to Kazakhstan and Uzbekistan show the high importance China attaches to the SCO and relations with the two countries, a Chinese foreign ministry spokesperson said on Tuesday.

“This will be China’s most important event of head-of-state diplomacy on the eve of the 20th National Congress of the Communist Party of China, which shows the high importance China attaches to the SCO and our relations with Kazakhstan and Uzbekistan,” spokesperson Mao Ning said during a news briefing, as quoted by the Xinhua state agency.