By George Baumgarten, United Nations Correspondent in International on 21 September 2022

NEW-YORK – At a momentous hour for the World Community, and at a United Nations General Assembly crowded with one of the greatest numbers of world leaders in recent years, President Kassym-Jomart Tokayev stood before that assembly at what he said was “a critical time for humanity.” 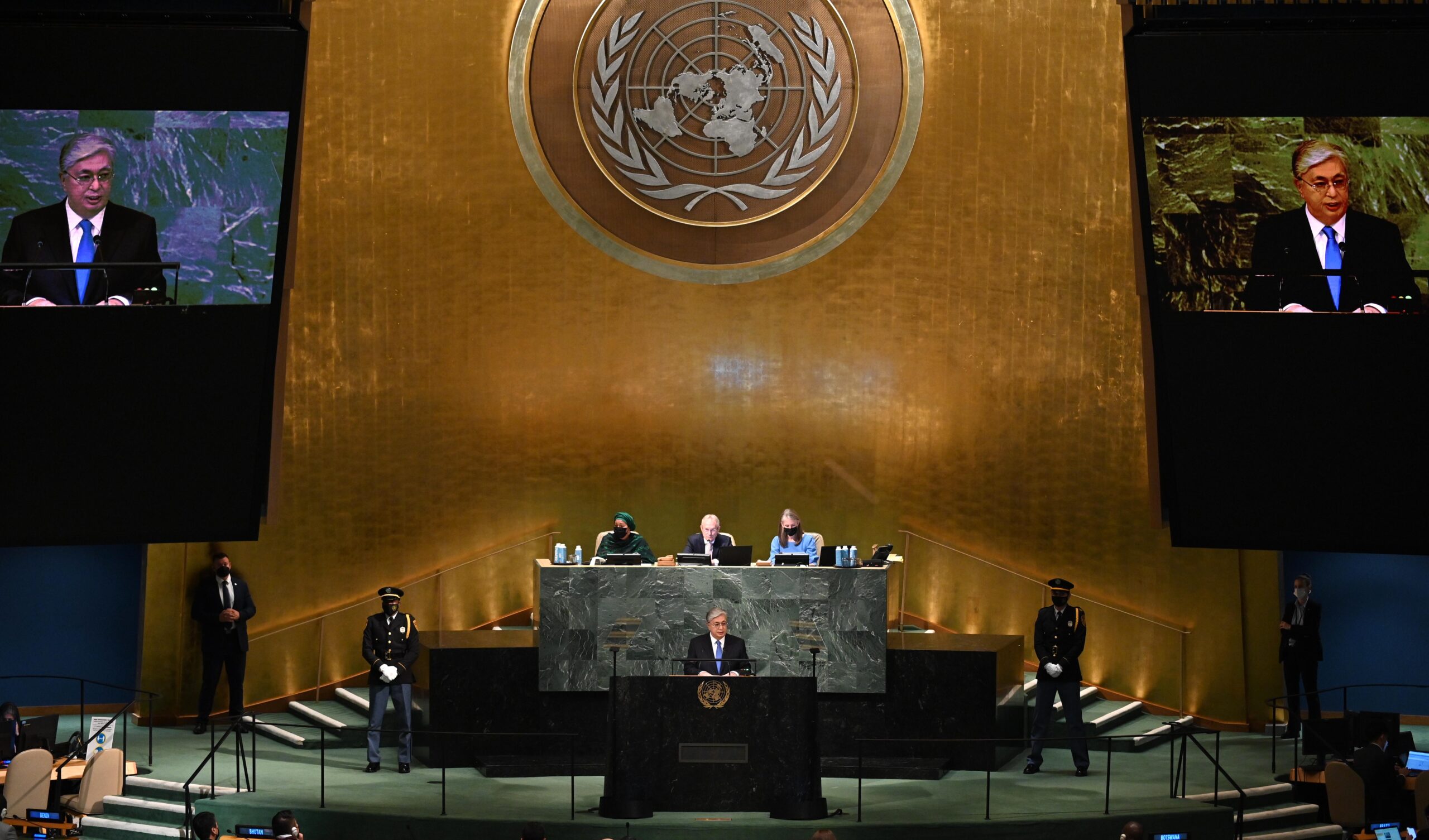 President Tokayev also met with the UN Secretary-General, Antonio Guterres of Portugal, at UN Headquarters in New York. They spoke of the relationship between Kazakhstan and the UN, including the UN presence in the country and the strategic world importance of the Central Asian region.

The President described the current era as one of “geopolitical confrontation,” characterized by greater chaos and unpredictability than heretofore. This has given rise to mutual distrust among nations, where is a “deepening distrust” among world powers. Therefore, efforts at combating climate change and implementing sustainable development are now under threat. The result has been a threat to the basic principle of a world community, living under international law.

The President noted that this world community is based on three “primordial principles” – the sovereign equality of states, the territorial integrity of those states and peaceful coexistence between states.

The existing global disarmament regime must be the basis for inter-state cooperation, which will lead to a “global prosperity dividend.”

“Too much is at stake,” the President said, to risk any greater world polarization and division. Therefore, Kazakhstan stands ready to cooperate with all who will act in a spirit of “inclusiveness, multilateralism and goodwill.” And efforts at continuing and further multilateralism must be encouraged and invigorated. Among the priorities for such action are the modernization and reform of the UN and other international bodies.

New efforts at such invigoration should include the Conference on Interaction and Confidence Building Measures in Asia (CICA), as well as the projected 2024 Summit of the Future.

President Tokayev noted, however, the effect of the Covid-19 pandemic, as well as the current Triple Planetary Crisis: Climate Change, Biodiversity Loss and Pollution.

The President reminded the world that Kazakhstan has had more nuclear weapons dropped on its territory than any other country. “Kazakhstan has suffered terribly from past nuclear weapons testing,” he said. So it can very well appreciate the need to prevent nuclear tension among world powers. Therefore, nuclear disarmament has become a critical element of Kazakhstan’s foreign policy.

In addition to such nuclear risks, the Covid-19 pandemic has highlighted the need to reduce biological risks and dangers. In this regard, the President noted that Kazakhstan has come to rely on the Biological Weapons Convention, now 50 years old. Therefore, he advocated the creation of an International Agency for Biological Safety.

Addressing the causes of climate change, President Tokayev said “we need more action, and we need it fast.” And he advocated the transition from a coal-oil energy sector into a net zero economy by 2060. He also mentioned the next Climate Conference, COP-27, later this year in Sharm El-Sheikh, Egypt.

President Tokayev spoke with particular pride of Kazakhstan as the world’s largest landlocked country, in the heart of Central Asia. This places it in a vital and critical position on developing Trans-Caspian International Transport Route, which has become known as the Middle Corridor. Thus, Central Asia is becoming a fertile region for international cooperation. In connection therewith, he called for the creation of a Regional Centre for SDGs, to be established in Almaty.

The President then shifted his attention to Kazakhstan’s domestic situation, calling for a Just Kazakhstan, with political reform and coming elections. He noted that Kazakhstan recently abolished the death penalty. He also mentioned the meeting—just last week—of the seventh Congress of Leaders of World and Traditional Religions, held in Astana. And he cited the 30th anniversary of the Kazakhstan-UN partnership. All this from a country of growing prominence on the current world stage.