in International on 3 September 2022

NUR-SULTAN – The contribution of the Assembly of the People of Kazakhstan (APK) is invaluable and its activities play a major role in the rapprochement of nations and cultures, said APK Ambassador of Friendship in France Malgorzata Oboron-Thouard in a recent interview with The Astana Times. 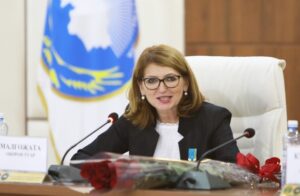 The Ambassador of Friendship’s activities are aimed at broadening other countries’ knowledge about Kazakhstan, representing an effective soft power tool in fortifying comprehensive interaction between the countries.

Thouard learned about the Assembly for the first time back in 2002, when she participated in the implementation of the Childhood Home project in the city of Zhezkazgan, today’s administrative center of the Ulytau Region. Before being awarded the Ambassador of Friendship title in 2019, Thouard held the position of the adviser to the Akim (Governor) of the Turkistan Region in 2018, where she got closely acquainted with Turkistan, the historic center of the Kazakh culture.

“Given the geopolitical situation, we are more aware than ever of the price of peace and harmony. We live at a time when the intensification of the rapprochement of nations and the understanding of ethnic characteristics become vital,” said Thouard.

The ambassador plays a unique role as a facilitator of the countries’ joint efforts to strengthen peace and implement common goals, being well aware of the peculiarities of legislation and respecting the public values of each state.

“The world is in the process of writing a new economic and social history, facing many challenges, including the protection of our rights and freedoms, global security, demography, education, health, employment, food problems, the fight against poverty, and global warming,” she said.

Thouard highlighted the importance of the institutional foundations that allow for an effective transition to the new world order, referring to the assembly’s activities.

“The Assembly is a unique model of social harmony and national unity with ethnic characteristics and diversity driven by the historic features of Kazakhstan. It prescribes openness to others, tolerance, and respect – the guarantors of social peace and mutual understanding,” she said.

The ambassador spoke about the significance of creating platforms for dialogue at the crossroads of political and institutional spheres to ensure the effectiveness of strategic cooperation.

“It is necessary to positively impact the decisions of political and economic actors, as well as to contribute to changes in the information coverage of Western media, which have insufficient knowledge about the Central Asian states,” she noted.

The APK was founded in 1995 to ensure peace in interethnic relations and deepen interaction between state institutions and civil society. In 2017, following the results of the 24th session of the APK Council, the institution established the Ambassador of Friendship honorary title, which is assigned to foreign persons who have contributed to the development of bilateral ties between the countries.