NUR-SULTAN – The COVID-19 pandemic has taught us many lessons. People can have different opinions and views, but joining efforts to lend a helping hand for a common cause is what can bridge many divides, while promoting civic virtue and generosity.

Last week, from Aug. 15 to Aug. 19, nearly 200 volunteers from across Central Asia convened in Kazakhstan for the first Central Asian Volunteers Forum to discuss the state of volunteerism in the region. Before arriving in Nur-Sultan, they spent a few days in Burabay and the Turkistan Region engaging in productive discussions on how they can promote volunteerism. 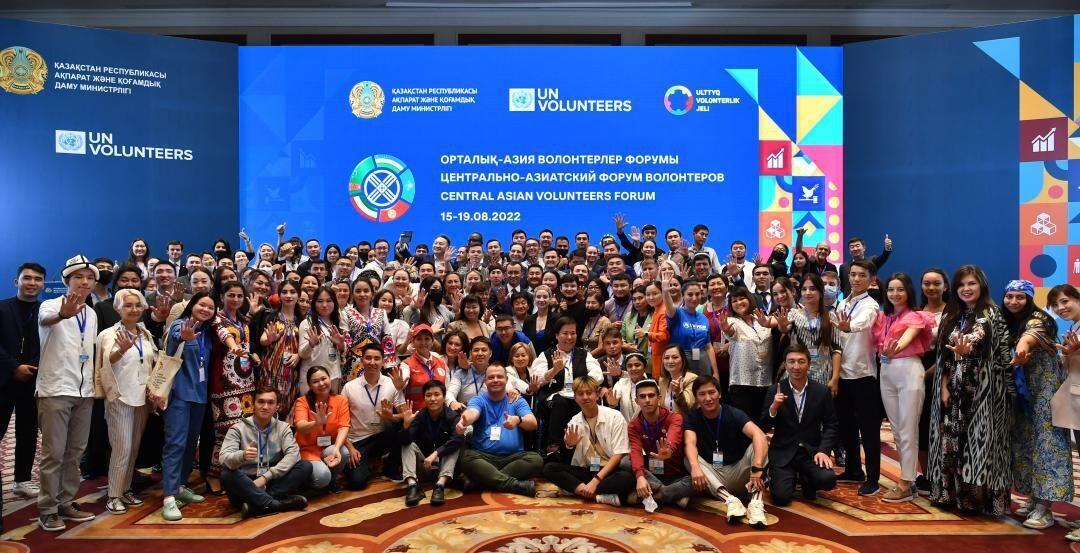 Forum participants pose for a group photo on the final day. Photo credit: Kazakh Ministry of Information and Public Development

While each of the countries has been making efforts in promoting the role of volunteer activity, only by joining together can they make a significant difference.

Definitions of volunteering vary. The 2022 State of the World’s Volunteerism Report, presented at the forum, describes volunteering as a “wide range of activities, including traditional forms of mutual aid and self-help, formal service delivery and other forms of civic participation, undertaken of free will, for the general public good and where the monetary reward is not the principal motivating factor.” So whatever definition one gives to volunteering, these are the three core principles that remain.

Opening the forum’s plenary session on Aug. 19, Maulen Ashimbayev, Speaker of the Senate, an upper chamber of the Kazakh Parliament, said that in the current reality, societies need to spread the “right system of values and promote the ideas of mutual assistance and mutual aid as never before.” He offered an interesting idea in which he connected the state of volunteerism in the country as an indicator of the maturity of the society. 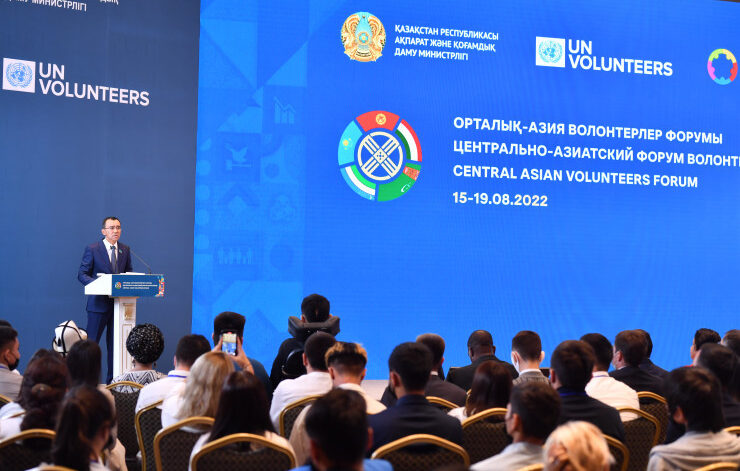 “In these times, many people need the support of volunteers and citizens who care. Volunteers are people who set a new model of behavior in society – a model of responsibility and caring. Your work makes us believe in the good and believe that there will always be people with a big and open heart who will lend a hand in a difficult situation. By spreading these ideals, you are gradually changing the entire society,” said Ashimbayev.

Development of volunteering in Kazakhstan

The first document written on a strategic level to underline the necessity of developing volunteer initiatives further has been the nation’s concept for the development of civil society for 2006-2011. The document back then envisioned promoting civil society development through the opening of different non-government organizations (NGOs) activities and the involvement of people in volunteer activity.

Since 2010, the government has engaged volunteers in large-scale events of international significance, including the OSCE Summit in 2010), the Summit of the Organization of Islamic Cooperation in 2011, the VII Asian Winter Games in 2011, and EXPO 2017. The major milestone occurred in 2016 when the country adopted the law on volunteer activity, and enshrined legal regulation related to the sphere of volunteering. 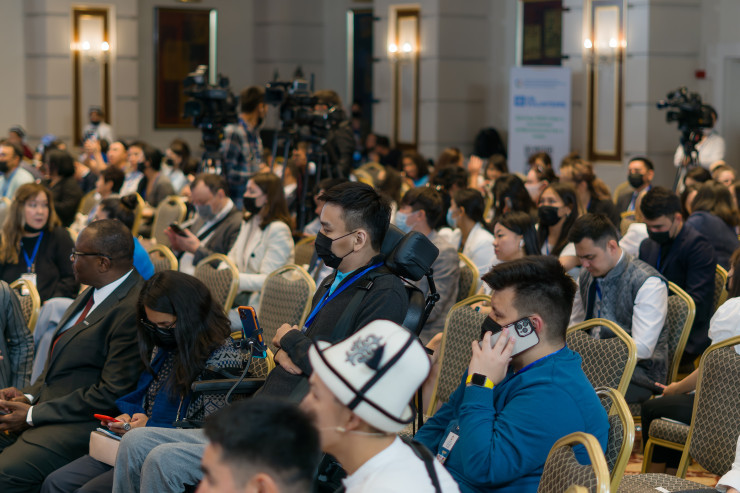 This is the first time volunteers from across Central Asia met to discuss the challenges they face. Photo credit: qazvolunteer.kz

Kazakhstan has been particularly active since the year 2020 was designated as the Year of Volunteer, oddly enough coinciding with the outbreak of the coronavirus infection. That was the time when volunteerism was at its peak with ordinary citizens and experienced volunteers mobilizing to help those in greater need.

The changes contain provisions that would give volunteers an advantage in the competition for state educational scholarships and would include volunteer activities upon entry into the civil service, among other norms.

Ashimbayev assured the volunteers that the Senate will continue to “keep a special focus on the further development of volunteering in Kazakhstan.”

“It is important to monitor the practical implementation of legislation on volunteering, including in the regions. If necessary, we will improve the legislative base,” he said.

“Our volunteerism loves silence. But we say that volunteering should be spoken boldly, brightly, and proudly, so that everyone hears about it. Then there will be a great impetus for the development of such initiatives,” she said. According to the data she mentioned, in 2020 over 200,000 volunteers were involved, and some 160,000 in 2021.

One-third of volunteers, she said, began to engage in volunteering on a regular basis as “professional volunteers.”

Kazakhstan has been a strong and active partner in the UNV program. While the cooperation has been ongoing since 1993, it became particularly active after the Ministry of Foreign Affairs signed a cooperation agreement with UNV in November 2019. Kazakhstan contributes to the work of UNV through its full funding program, cost-sharing efforts, and support for International Volunteer Day (IVD).

“In 2021, we sent volunteers from Kazakhstan to UN structures in Asia, Africa, and the Middle East. UN Volunteers support the state, and the development of volunteering and are involved in different agencies, programs, and foundations,” said Nikita Shabayev, UNV Country Coordinator in Kazakhstan.

Addressing the forum virtually, UNV Executive Coordinator Toily Kurbanov said that the UN is watching the development of volunteerism in Central Asia with a “keen interest.”

“Over the past years, volunteer organizations across the region, with the support of governments and all groups of society, have come a long way. From supporting low-income groups to helping elders, from involving people with special needs to online volunteering. The contribution of volunteers is obvious and we have something to learn from each country in Central Asia,” said Kurbanov, emphasizing that solidarity and mutual support have been historically a part of cultural norms for people in the region. 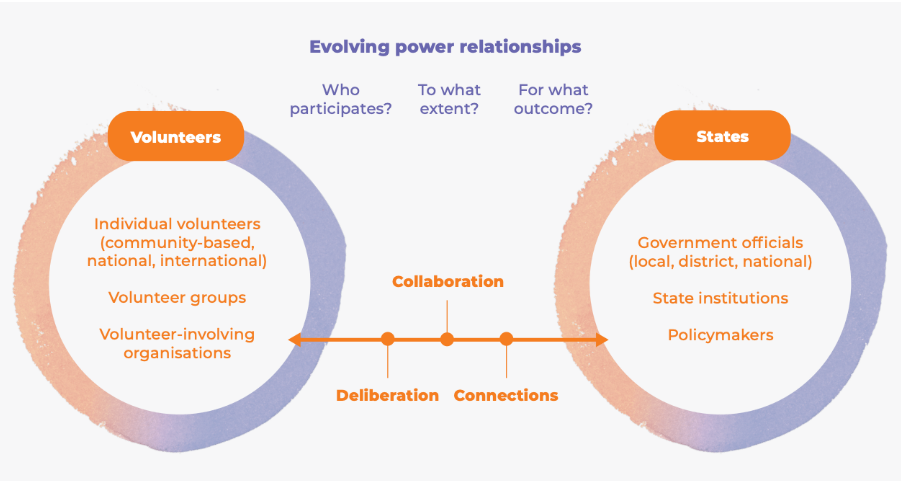 One of the special sessions at the forum featured the presentation of the 2022 State of the World’s Volunteerism Report which explores the ways in which volunteer–state partnerships can help address the most pressing challenges. It reveals that cooperation between volunteers and governments helps build collaborative decision-making, but increasing inequalities worldwide call for a new type of social contract with a renewed emphasis on inclusion.

One of the key challenges identified in the report is estimating the scale and scope of global volunteerism, because many volunteering activities are taking place informally, directly between individuals and communities without being mediated by an organization.

So far, looking at the total number of volunteers, the monthly number of volunteers aged 15 years and over reaches 862.4 million worldwide. However, there are significant regional differences, with Asia and the Pacific taking a strong lead (563.9 million), which can be explained by different population sizes and varying volunteer rates. In Europe and Central Asia, there are some 81.1 million volunteers.

The report concludes with several policy recommendations – promoting volunteering beyond service delivery to include social innovation and inclusiveness, strengthening public social recognition of volunteers, creating space where both volunteers and state authorities can share their experiences and establish common ground, and investing in data gathering techniques on volunteers as well as providing additional support research on volunteerism.