The global economy is reeling and countries are scrambling to deal with the consequences of the global lockdown that was implemented to deal with the pandemic. For the people forced to live through the lockdown, the future looks bleak as they prepare for more struggle. But not everything is doom and gloom. As coronavirus spread across the country, many ordinary people rose to the challenge and came together in solidarity to help those more vulnerable or in need. 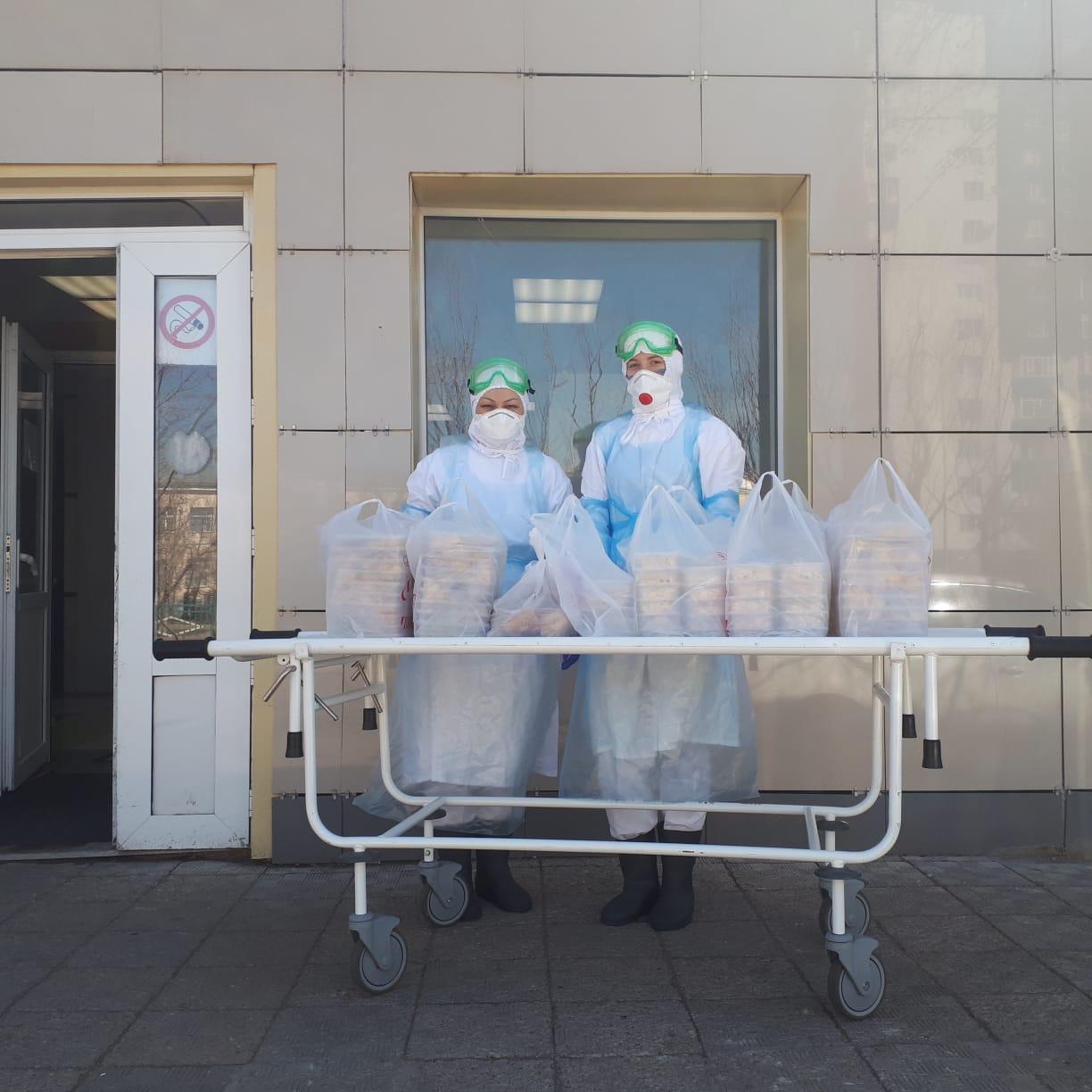 The Astana Times spoke to several citizens-volunteers who came up with novel ways to help their fellow citizens in this time of crisis.

Konstantin Avershin, head of the Ya Almaatinets (I am an Almaty resident) grassroots movement, was among the first in the country to react to the situation. They began delivering groceries on March 12.

The organization has more than 16,000 members and has been in service since 2015 – the recent state of emergency and lockdown have been the ninth emergency that they’ve rallied to lend a helping hand in.

On March 17, they announced the “Who If Not Me?” challenge on their Facebook page that quickly went viral in more than 14 cities across the country.

“Its goal initially, given the lockdown, was to encourage people to help those in need – those who could not go outside. At the time, there was panic. People were pushing and jostling each other in stores. Elderly people, who are an at-risk group, needed to stay home. Our challenge was focused on getting people to notice and help the elderly around them,” Avershin explained.

The group is organizing food packages at a warehouse provided by the Almaty Akimat. Photo credit: Ya Almaatinets organisation

“Large businesses supported us – we received significant support from the Magnum chain, also from Efes and the Kusto Group. We had a massive turnout. Other volunteer networks also supported us such as Lider.kz, the Red Crescent Society, Club Dobryakov Almaty, Aruzhan Sain Foundation and the Amila Foundation (for cancer patients). There were around 35 groups in the country who participated,” said Avershin.

“We worked around the clock, without breaks for the two months of lockdown. Our people did not rest at all. We responded to the situation quite fast and the city akimat (administration) provided us a warehouse for our activities. Farmers were coming in to provide fresh products,” he said.

He thanked businesses for their support, both the small and medium ones, as well as ordinary people for their heart-warming support.

“Sometimes, they ask why do you do all of this, the state should handle these sorts of things. Our efforts were carried out without any state funding. As a rule, I believe that a person should ask himself or herself what he or she can do for people and the country, and not vice versa. People should not just sit around and wait for somebody to come and give them food and money,” said Avershin.

Aisulu Tustykbayeva from Almaty did not have any large organizational support, but she also could not stand by idly while the pandemic was affecting everyone around her.

She organized food delivery to medical workers in Almaty and Nur-Sultan. They gathered more than 3.68 million tenge (US$8,704) which they spent to provide meals to 2,700 people. 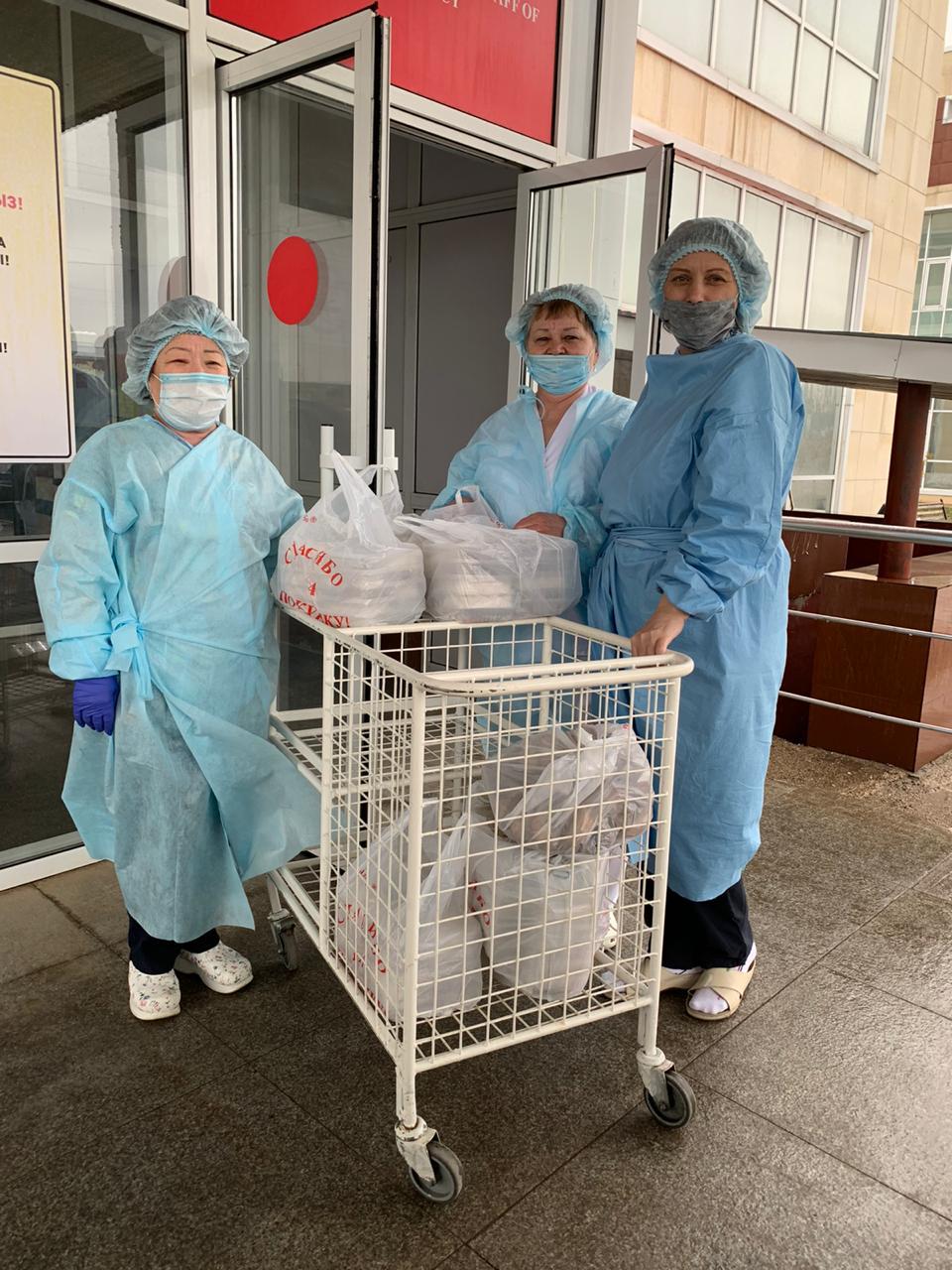 “I understood that people are making sacrifices, not seeing their family for days and even weeks while I sit on my coach in lockdown.. I wanted to make a contribution and I thought the best way to do that would be to send meals. Food is a universal language that everyone understands. I decided to spend 30,000 tenge (US$71) of my own money on March 30 to provide 20 portions of plov to an emergency department of No. 2 hospital (in Almaty),” she told The Astana Times.

Her action encouraged other people to donate and help in any way they could.

“I posted on Instagram what I did and told people that if they want to help, but do not know how, that this was one of the ways they could do it. I had no serious plans at first to organize anything,” she said.

Tustykbayeva then contacted Artem Marchenko, chef and head of Zina restaurant in Nur-Sultan.

“I chose Zina because they provided free food to volunteers in quarantine facilities in Ramada hotel, and I wanted to support their businesses. It is an ethical business that volunteered to help in a difficult time. Everything began to unfold from there,” she said.

Logistics were a hurdle that needed to be solved because Tustukbayeva lives in Almaty and some hospitals she organized help for were located in Nur-Sultan.

They began to deliver meals to 155 people daily spread between four healthcare facilities.

“We had to organize it so that people got it in time and so that the food was not cold, so for that we needed a driver. Nazarbayev University provided a car to us, but that wasn’t the end of our problems – we had trouble getting a proper permit because of the lockdown movement restrictions. It took awhile, but we overcame these obstacles. Everything runs smoothly now,” she said.

She and her team are now organizing an online concert scheduled on May 15 to draw more attention to their efforts. They are also organizing a digital concert on May 16 that will feature some of Kazakhstan’s most popular DJs.

“The virus has not disappeared yet and the situation remains critical. We need to continue our efforts to lend support to frontline workers. We will continue helping as much as we can as long as the crisis continues and there is a strain on our country’s health system,” she said.

The spirit of camaraderie and civic participation began to spread all over the nation.

The Club Dobryakov Astana (Astana Club of Kind Souls), a volunteer movement working across several cities in Kazakhstan, also assisted nearly 3,500 families in the capital and nearby villages during the lockdown. They were delivering ready-made food boxes, including essential products, such as cereals, pasta, vegetable oil, sugar, and salt.

The club witnessed an outpouring of solidarity and support from the public.

“Many people from outside the community responded to our calls for help in packing and distribution products. This suggests that a spirit of kindness is alive and well among us and that together we are strong. In our case, we were assisted by the police and the National Security Committee of Nur-Sultan in our efforts because we needed passes for volunteers to ensure unimpeded movement around the city and the villages located in the quarantine zone, the akimats of the villages located behind the checkpoints organized the transfer of food packages at checkpoints and delivered them to the families of their villages. We love our work and what we do, but each of us hopes that there will be a time when no family will need the help of volunteers,” Club Dobryakov administrator Botakoz Bekhozhina explained.

“Volunteers are ordinary people who have their own families, children, work and other worries, but each of them finds the time and energy to make the world a little better because they believe that good exists,” said Bekhozhina.

Avershin said that his organization focuses on training volunteers. He had a chance to meet Kazakh President Kassym-Jomart Tokayev in December during the launch of a volunteer front office in Almaty.

“I had a chance to discuss this topic with him. I do not know why, but I raised concerns about the emergency response. We showed them that there was a lot of work that still needed to be done. We are now revising our work and concluding where we could have improved. The President promised to support our endeavors,” he said.

“We are ready to share our experience and train volunteers, but state support is essential. It is also important to note that all these efforts, like the Year of Youth or the Year of the Volunteer, should not be just on paper. They (volunteers) need to be prepared and trained, and this takes years of work and planning,” he said.