By Saniya Bulatkulova in Culture on 13 August 2022

NUR-SULTAN – Passing through the streets of the city one may not even notice various works of art or, on the contrary, stop for a moment to carefully observe the details of these works left on the facades by the creators of the past century. The monumental decorative panel called “Kazakh Folk Crafts,” which was recently found at 40 Dostyk Street in Almaty, is considered to be one of those unique compositions. 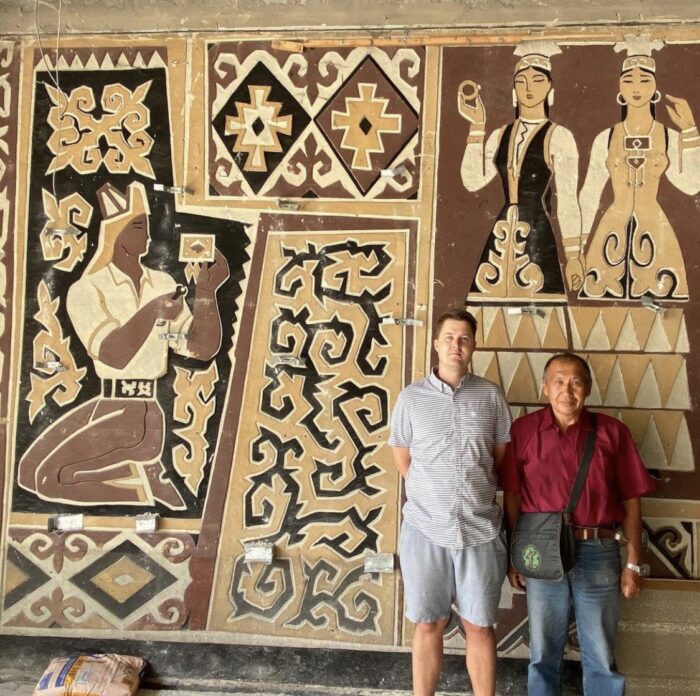 The panel was made by famous Soviet artists Moldakhmet Kenbayev and Nikolai Tsivchinsky in the sgraffito technique back in 1970.

In his article, Dennis Keen, a Central Asia specialist with expertise in Kazakh history, culture, and language, explains that sgraffito translates as “to scratch” from Italian and is a decorating technique produced by applying layers of colors to the wall and then scratching off parts of the layers.

“This panel was made by my father and Tsivchinsky in 1970 by order of the city administration. The former souvenir shop Kazakhstan, which is located at 40 Dostyk Street, was the face of the Kazakh Soviet Socialist Republic (KazSSR). People could buy souvenirs, jewelry, folk crafts, tapestries, utensil and paintings there,” said Kenbayev’s son Alpamys Kenbayev in an interview with The Astana Times.

When asked about how the panel was found, Kenbayev said he learned about it from Keen, who later invited him to see it.

“The owner of the store changed and he decided to carry out repairs. The panel was found when the drywall was uncovered. The last time I saw it was in 1970 so I recalled it only now,” added Kenbayev. 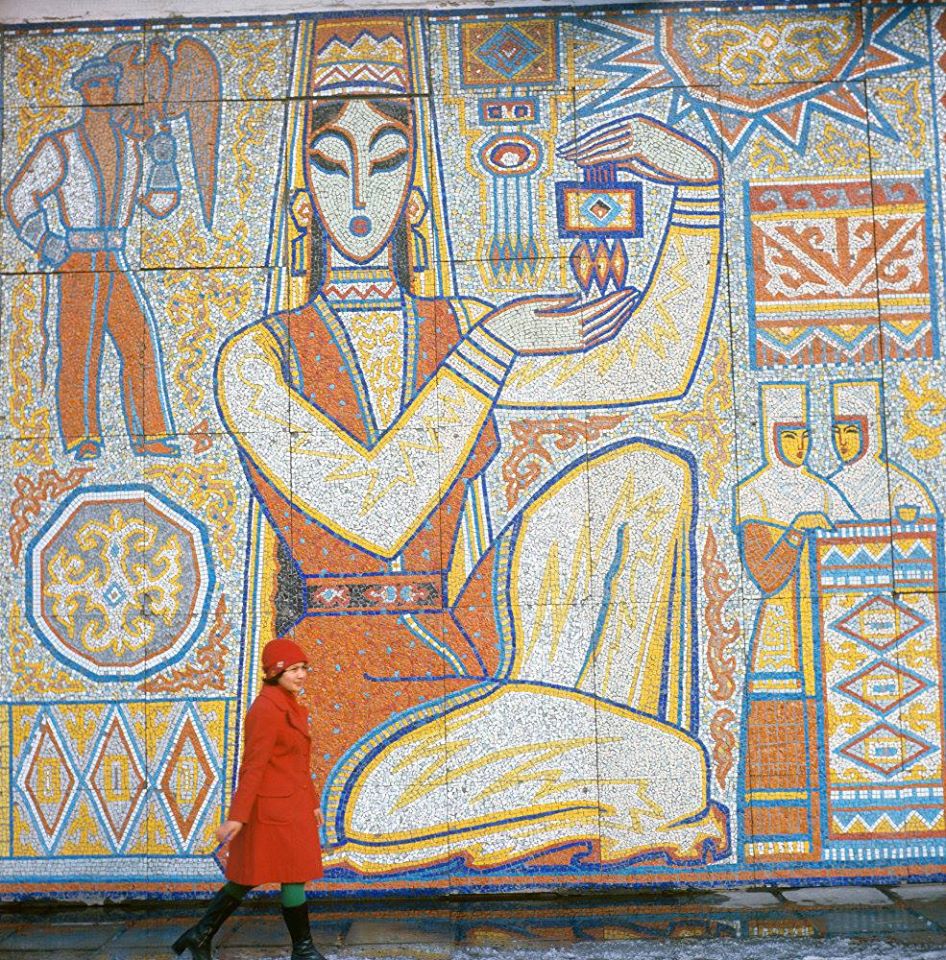 ​”The Girl with the Souvenir” or “Sulushash” mosaic by the same artists was once outside former store Kazakhstan, then it was restored and removed to Kok Tobe. Photo credit: monumentalalmaty.com

According to him, the panel is in excellent condition and requires a small restoration. The new owners understand that this is the property of the Kazakh people and it is part of their history. They will put up a sign with information about the date and the authors of this artwork.

“One thing that makes it really unique is the technique that was used. It is not a mosaic, not a mural, it is sgraffito. And there are very few examples of these left in Almaty. This is probably one of the earliest in the entire city. So it is quite historic,” said Keen, who learned about the discovery from Archcode Almaty project founder Adil Azhiyev.

Born in 1925, Kenbayev was a graduate of the Moscow State Academic Art Institute named after Surikov. He was a student of Fedor Reshetnikov, the author of the famous painting “Again Deuce.” 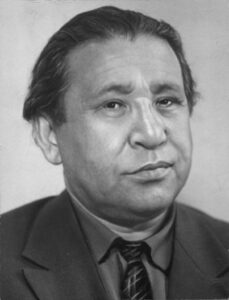 Kenbayev’s works, which were largely devoted to the steppe life of the Kazakhs and the country’s nature, were presented at both national and foreign exhibitions. One of Kenbayev’s paintings called “Catching the Horse” is kept in the Moscow-based Tretyakov State Gallery.

Tsivchinsky, who is often called the author of the first Kazakh tapestries and the creator of the carpet factory, was 20 years older than Kenbayev and was born in 1905 in Saint Petersburg. In 1937, he moved to Almaty.

Tsivchinsky was an artist of monumental and decorative-applied art as well as the author of the famous political poster “The Victory of the Five Year Plan is a Strike Against Capitalism!”

Apart from the mural, the artists created several mosaics, stained glass windows and paintings. Kenbayev and Tsivchinsky were both Honored Artists of the KazSSR.