By Assem Assaniyaz in Congress of Leaders of World and Traditional Religions, International on 4 August 2022

NUR-SULTAN – The Kazakh capital will host the seventh Congress of Leaders of World and Traditional Religions on Sept.14-15.

Considering the geopolitical situation and the post–pandemic crisis worldwide, the role of religious leaders in conflict resolution is more relevant than ever, says Chair of Nazarbayev Center for Development of Interfaith and Intercivilization Dialogue Bulat Sarsenbayev in an interview with The Astana Times. 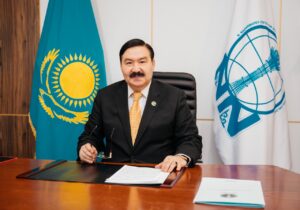 Established in 2019, at the initiative of Kazakh President Kassym-Jomart Tokayev and with the support of Kazakhstan’s First President Nursultan Nazarbayev, the center serves as the main coordinating body of the Congress.

Sarsenbayev highlighted Kazakhstan’s unique experience of strengthening interfaith and interreligious dialogue, which remains in demand at the global level, and which represents one of the key methods of improving the well-being of all nations.

The topic of the upcoming Congress was determined at the XIX session of the Secretariat of the Congress – “The role of leaders of world and traditional religions in the spiritual and social development of mankind in the post-pandemic period.”

What key issues and tasks will the discourse of the seventh Congress be dedicated to?

The pandemic has forced us to make many adjustments to our lifestyle, and therefore the importance of spirituality has begun to manifest itself.

During the Congress, which will be held with the participation of the Head of State, the center will organize four breakout sessions on the role of religion in strengthening spiritual and moral values, education, and religious enlightenment, as well as on the support for the social status of woman, their contribution to the well-being of society, and countering extremism, radicalism, and terrorism, especially of the religious variety.

Given the complicated geopolitical situation in the world, it should be noted that the Congress is going to be one of the main international events of the year, where Kazakhstan will demonstrate to the world its commitment to the ideas of tolerance, openness, mutual respect, and trust between the state and society.

How many invited guests have confirmed their participation in the upcoming event?

This year, we expect to welcome nearly 100 delegations from 60 countries, including representatives of Islam, Christianity, Judaism, Shintoism, Buddhism, Zoroastrianism, Hinduism, and other religions.

The Head of the Catholic Church Pope Francis, Patriarch Kirill of Moscow and all Russia, Grand Imam of al-Azhar Ahmed Mohamed Ahmed El-Tayeb, Patriarch Theophilos III of Jerusalem, and the delegations of leading religious and international organizations from the United States, Europe, and Asia plan to attend the Congress.

We also expect to have more than 100 international media representatives accredited for the event.

The Congress gathers not only religious representatives, but the first persons of the confessions, who can influence the many issues on the agenda. They perceive Kazakhstan as a reliable and predictable partner, and it reflects the high assessment of our country’s policy in the field of spirituality. I must note that the Congress unites those who wouldn’t be seated together at the same table anywhere else.

What are the development dynamics of the Congress since 2003? Has the number of participants expanded?

The very idea of organizing the Congress was timely and supported by world politicians, including Nelson Mandela, Kofi Annan, Margaret Thatcher, and others. The first Congress was held in 2003 after the events in 2001, when the radicalization of society on religious grounds was intensifying.

Following the results of substantive talks on the spiritual rapprochement of religious communities after each of the six Congresses of Leaders of World and Traditional Religions held in 2003, 2006, 2009, 2012, 2015, and 2018 in Nur-Sultan, involved parties began adopting joint declarations.

With each visit, the number of participants gradually increased. For comparison, 17 delegations from 13 countries took part at the first Congress in 2003, and as for this year – we expect approximately 100 delegations from 60 countries.

This year, the National Museum will present an exposition in a new format dedicated to the history of religion on the territory of Kazakhstan. We will also propose them to see a photo exhibition about to the history of all six Congresses at the Baiterek Tower [a monument and observation deck], and at the Kazmedia Center, a TV broadcasting center, dedicated to Islam, Christianity, Judaism, and Buddhism. The Independence Palace will also arrange an exhibition of paintings selected at the competition among the schoolchildren of Nur-Sultan, which was held by the center on the eve of the Children’s Day.

What other activities come under the center’s purview?

In addition to the main preparatory work for the Congress, the center studies and monitors the religious situation in the country, and conducts religious expertise, for example, to prevent the threat of the radicalization of the population.

Today, more than 100 ethnic groups and 18 officially registered confessions live on the territory of our country. The situation is under complete control, as we have a well-established dialogue between the government and legal representatives of the various religions.

Kazakhstan has historically been at a crossroads of many religions, which were spread on its territory, especially Islam and Tengrism. The Caspian Sea area is the birthplace of Zoroastrianism. Buddhism, which originated on the border of Nepal and India, received worldwide development through the Kushan Empire, a syncretic empire formed in the early first century. In the fifth century, Christians also lived on our territory, and only after six centuries their religion had begun to spread in Russia.

Considering our history, we have a moral obligation to host such a meaningful event soon in September.