By Aida Haidar in International on 1 August 2022

NUR-SULTAN – Pope Francis will make his 38th Apostolic Journey to Kazakhstan on Sept. 13-15, 2022 at the invitation of Kazakh President Kassym-Jomart Tokayev, the presidential press service reported on Aug. 1. 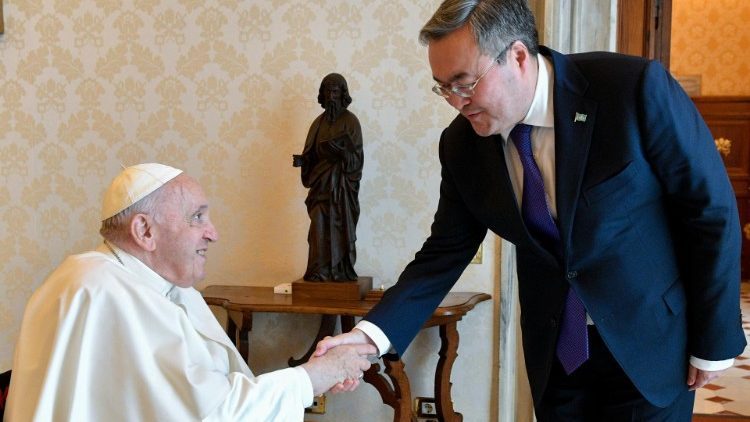 The Pope is scheduled to meet with the country’s senior leadership and participate in the VII Congress of Leaders of World and Traditional Religions.

In a statement on Monday, Matteo Bruni, the Director of the Holy See Press Office announced: “Accepting the invitation of the civil and ecclesial authorities, Pope Francis will make the announced Apostolic Journey to Kazakhstan from 13-15 September this year, visiting the city of Nur-Sultan on the occasion of the VII Congress of Leaders of World and Traditional Religions.”

The Pope first mentioned the possibility of a September visit during a video conversation with Kazakh President Kassym-Jomart Tokayev in early April.

Pope Francis commended Kazakhstan’s contribution to the promotion of interfaith harmony and interreligious dialogue during his May 31 meeting with Kazakhstan’s Deputy Prime Minister – Minister of Foreign Affairs Mukhtar Tileuberdi. He said Kazakhstan has been a reliable partner of the Vatican in Central Asia.

Pope Francis and Tileuberdi discussed the agenda of the upcoming VII Congress of Leaders of World and Traditional Religions that is expected to convene religious leaders from all over the world to explore the role of religious leaders in spiritual and social development of humankind in the post-pandemic period.