By Saniya Bulatkulova in Culture, Kazakhstan Region Profiles: A Deep Dive Into the Heart of Central Asia on 21 August 2022

NUR-SULTAN – The Kazakh landscape is famous not only for its picturesque nature and rich natural resources but also for its diverse archaeological monuments, which help us understand the history of the country and its place in the world. 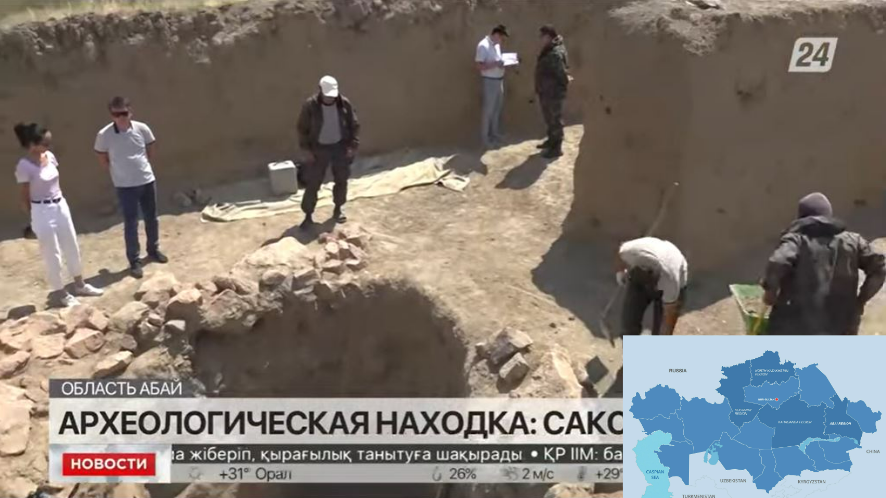 A fragment from Khabar Tv channel’s report about Saka tribes’ tomb. Click to see the map in full size

At present, 15 archaeological teams are working at different locations across the country, said Talgat Mamirov, deputy director for science at A. Kh. Margulan Institute of Archaeology in a recent interview with Zakon.kz agency.

The Astana Times drew up a list of some of the most interesting and unique artifacts found recently in different regions of the country.

According to the Khabar TV channel’s report, scientists came across the Saka people’s tomb during one of their expeditions. One of their leaders was supposedly buried 3,000 years ago in the tomb.

The archaeologists also found human remains and gold ornaments made with animal designs. The diameter of the burial mound, which was previously looted, is approximately 30 meters. 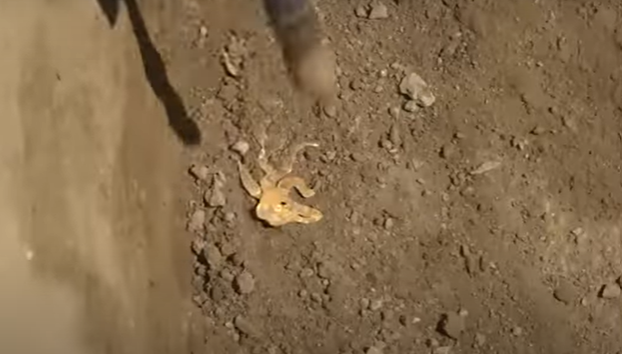 The archaeologists also found human remains and gold ornaments made with animal designs in the tumb.

“We found deer and leopard ornaments, but, unfortunately, they are not completely preserved. Our excavations will continue as we hope to find something else valuable. I can note that the tomb itself was made unusually. This is the first time we have encountered such a thing. Stone slabs are set edge-on in a burial ground,” said archaeologist Baurzhan Besetayev.

On Aug. 12, Qazaqtv reported that several dams, irrigation ditches, and more than 10 mausoleums of the Stone Age were discovered on the territory of Kyzyl-Oba, a unique archaeological monument.

According to Rakhat Mambetalinov, who serves as the director of the center for the protection and use of historical and cultural heritage, the presence of such mausoleums allows scientists to postulate that people of high status lived in that area. Even an ordinary bai, which means a rich livestock owner in Kazakh, could not afford to erect such a mausoleum. 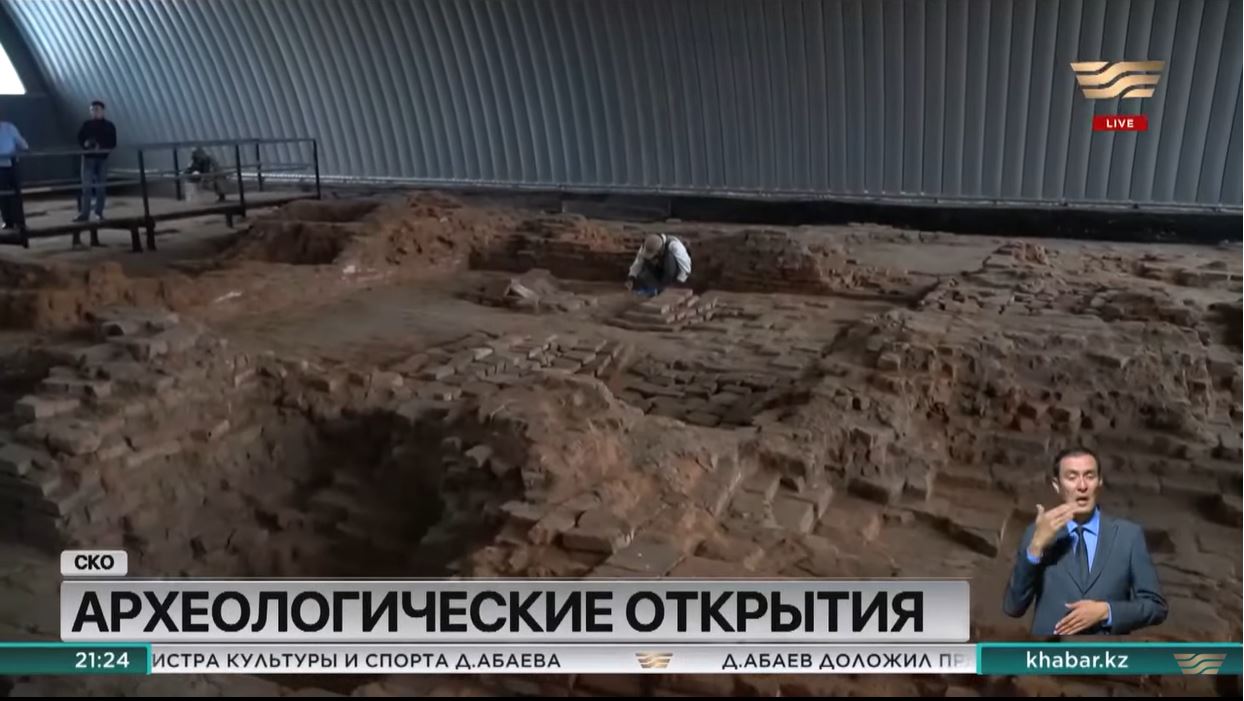 Scientists hope to find a whole city underground, as many artifacts indicate that the ancient population led a settled way of life.

Another discovery uncovered during excavations are late Eneolithic artifacts, which were found in the area of the middle-ages settlements.

“These are stone adzes, arrowheads, scrapers, plates, chipped stones, and serrated tools among other instruments of labor. The findings show that this area had been inhabited since ancient times, and people lived and hunted here 8,000 years ago,” said researcher of the National Museum of Kazakhstan Saule Rakhimzhanova.

A group of scientists from the United Kingdom is expected to join the archaeological excavations next year, while local scientists plan to start collecting documents to include the area in the UNESCO’s List of World Historical and Cultural Heritage.

Earlier in 2020, coins from 1337 were found in the area of the Kyzyl Oba burial ground.

The bronze cauldron was found in the mound of Taldi Historical and Archaeological Park.

The unique artifacts dating back approximately 2,500 years ago were uncovered during excavations in one of the mounds in the Shetsk district in the Karagandy Region, reported the Kazinform news agency in early August. 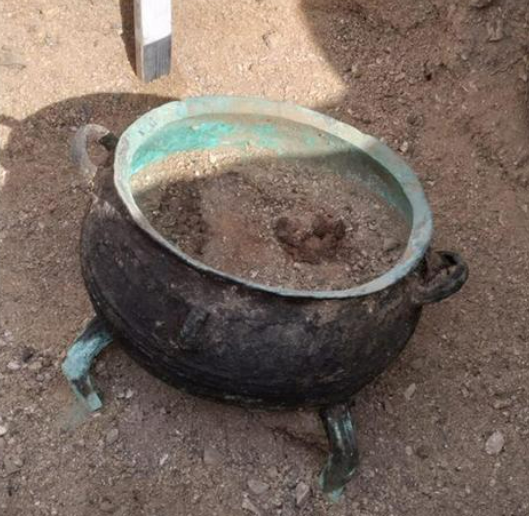 One of those findings – a massive bronze cauldron filled with remains of iron and badges – was found near the burial ground of Kyzylzhartas. In its morphological features, the cauldron is similar to the artifacts found in Semirechye. The weight of the cauldron is 25 kilograms, the diameter is 41 centimeters and the height is 34 centimeters.

“The cauldron is heavily smoked, which means that people cooked food in it. Curiously, there were a lot of iron and bronze items inside. Apparently, these are pieces of horse harness. Apart from plaques and buttons, there are zoomorphic images: figures of a horse and a predator, which we called tigrogriffin. Some scientists suggest that the iron remains were horse masks,” said Igor Kukushkin, a leading researcher at Saryarka Archaeological Institute of Karaganda University named after E. A. Buketov. 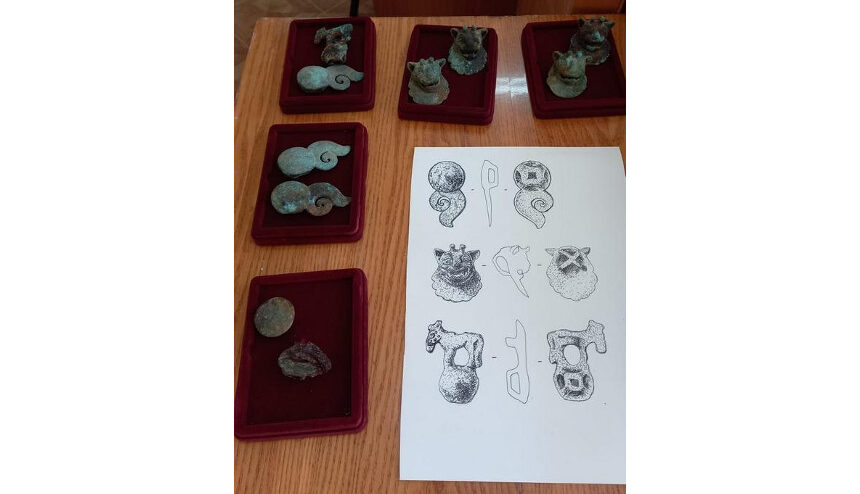 To obtain more detailed information, scientists will undertake research in foreign laboratories. “We cooperate with colleagues from Poland, Lithuania, Ireland, Romania and Hungary. They have the necessary equipment and extensive experience. We will determine the date and then we will learn other details. All of this will take time,” added Kukushkin.

4.The burial ground of the Andronovo era near the village of Novoyilynovka in the Kostanai Region

According to local archaeologists, the funerary field contains nearly 30 visible constructions. During the excavations, scientists discovered historic findings and one of them was that the development of the horse as a vehicle for movement occurred in the Bronze Age. It was proven by the fragments of the bridle found in the mounds. 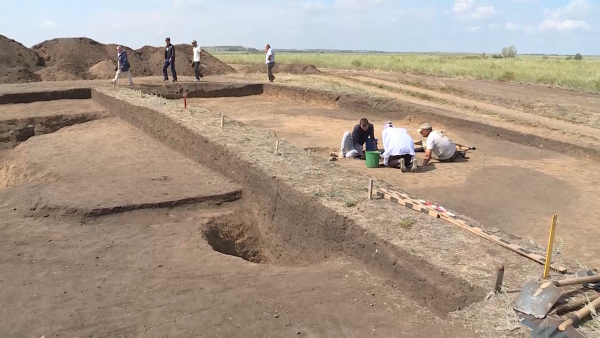 The burial ground near the village of Novoyilynovka in the Kostanai Region. Photo credit: qazaqtv.com

“A gold plaque was found here and is now kept in the Lisakov Museum. I managed to find an exact analogy of this plaque on figures from Serbia. These figures are goddesses who wear these pendants. In this case, this burial ground also showcases broad connections,” said Emma Usmanova, a research scientist at Saryarka Archaeological Institute, in an interview with Khabar TV channel.

Artem Yakimov is one of the Russian scientists who worked with Kazakh researchers. He now studies the soil at the time of burial in the mounds.

“This burial ground is unique as there are various mounds of different times. I mean, it is great luck for us, because we can at least ‘rebuild the chain’ for this district. That is, for example, the late Bronze Age, the early Iron Age and the Middle Ages. I am speaking loosely. I mean we can identify the changes that happened here and monitor the dynamics to this day,” said Yakimov.

The discoveries will be presented at the third international festival of ancient technology and cultural communication named after Thor Heyerdahl Desht-Thor in late August.