By Staff Report in International on 29 August 2022

NUR-SULTAN – Deputy Prime Minister and Minister of Foreign Affairs of Kazakhstan Mukhtar Tileuberdi and Executive Secretary of Comprehensive Nuclear Test Ban Treaty Organization (CTBTO) Robert Floyd reaffirmed their commitment to a nuclear weapons free world and reiterated their determination to achieve the entry into force of the Comprehensive Nuclear-Test-Ban Treaty (CTBT) in a joint statement released on Aug. 29 to mark the International Day Against Nuclear Tests, reported the ministry’s press service. 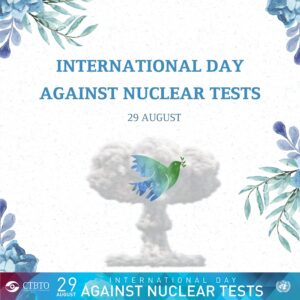 “The closure of the Semipalatinsk nuclear test site on Aug. 29 in 1991 has become a symbolic date for Kazakhstan and the international community. This important event sent a strong political message and contributed to international efforts that led to the adoption of the CTBT in 1996. Since its adoption, Kazakhstan has consistently supported the CTBT and the build-up of its verification regime,” reads the statement.

“With 186 signatures and 173 ratifications, there has been much progress towards the universalization of the CTBT. We welcome the recent ratifications of the treaty by Gambia, Tuvalu, Dominica and Timor-Leste, all of which reflect a collective effort of all stakeholders on the 25th anniversary year of the treaty. Its verification regime is nearly complete. Although yet to become legally binding, adherence to the CTBT and the norm against nuclear testing has become virtually universal,” it reads.

Tileuberdi and Floyd reaffirmed the CTBT’s role as a key pillar of the nuclear non-proliferation and disarmament regime within the Treaty on the Non-Proliferation of Nuclear Weapons (NPT) Review process. The CTBT is an effective and practical measure to achieve a world without nuclear weapons.

The officials encouraged all states to attend the high-level plenary meeting of the United Nations General Assembly (UNGA) to commemorate and promote the International Day Against Nuclear Tests at the United Nations (UN) headquarters in New York, which will take place on Sept. 7 this year.

“We call on all states to continue to observe the moratoria on nuclear explosions. We urge those states that have not yet signed and/or ratified the treaty to do so without delay. We call on the remaining eight Annex 2 States, whose ratifications are required for entry into force of the CTBT, to demonstrate their commitment to nuclear non-proliferation and disarmament by taking this important step in support of international peace and security,” it says.

It is high time to bring the CTBT into force to advance nuclear disarmament and create a safer and more secure world for future generations – a shared goal of humanity in the 21st century.