By Saniya Bulatkulova in Kazakhstan Region Profiles: A Deep Dive Into the Heart of Central Asia, Tourism on 28 August 2022

NUR-SULTAN – The Charyn Canyon located 154 kilometers along the valley of the Charyn River, observed an increased number of tourists in recent years. In 2021, 34,997 people attended the Charyn National Park, and 20,036 people came to see magnificent views in the first half of 2022, according to the park’s press service. 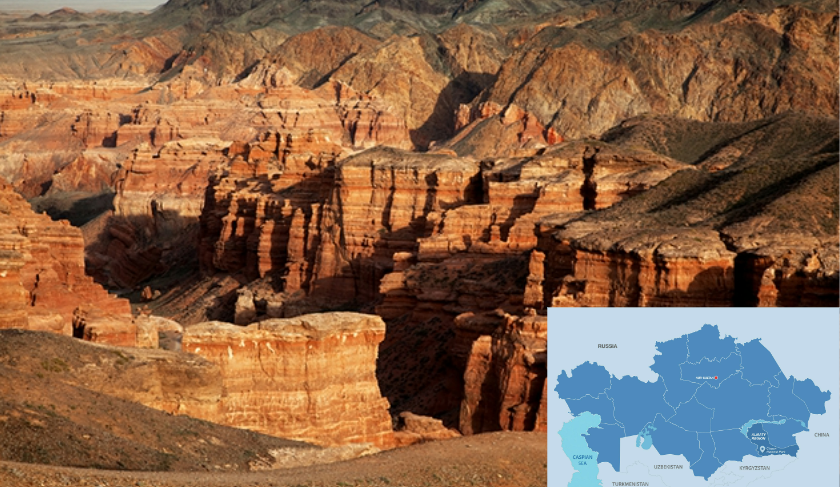 The canyon, which is located 200 kilometers away from Almaty, gained its popularity due to the picturesque landscapes. Its sediments date back 12 million years and its height reaches 150-300 meters. The destination is one of the most famous 26 canyons in the world and is often compared with the Grand Canyon in the United States.

Just a few years ago, tourists did not feel comfortable there due to a lack of sanitary conditions and cell phone service, but, at present, there is a quality connection, Internet, and even an autonomous meteorological station for monitoring the weather. Warning signs and specially equipped rest stops have been installed along the route.

“I can say that everything has noticeably changed. It is seen that the park’s employees are doing their jobs. Toilets have been added, trails have been equipped, and drinking fountains with benches have been installed. It is clear that the park is clean and garbage is taken out. We see that work is going on. I started to visit Charyn 20-25 years ago and there was nothing in those times. Besides, a good road has been built,” said local tourist Ilya Veshnyak in an interview with the Khabar TV channel.

According to the Kazakh National Geographic Society’s press service (Qazaq Geography), eco-toilets, drinking fountains, shadow awnings, and observation platforms have appeared so far as part of the development plan concept that has been implemented since 2021.

Apart from Kazakh citizens, foreign guests of the park also noted convenient facilities created for tourists in the area.

“We, French people, are great fans of ecotourism, therefore I like everything here. I would like to note your caring attitude to local national parks. It feels like we are in wild nature, but the fountains and shops remind me of comfort. If such a canyon was in France, it would be fully commercialized: we would put souvenir shops and other stores. And you do not have such spots. That’s the highlight,” said Florian Maheo from France in an interview with the Khabar TV channel.

Another tourist – Antonio Yanos from Mexico – said that Kazakhstan is a beautiful country with friendly and open people, modern cities and unique landscapes.

“I thought that the nature of Kazakhstan is the same as everywhere in Central Asia. And now I realized that I was very wrong. I traveled to Switzerland and Sahara in one day, and now it seems I am in the US. Three different landscapes – and they are all in the same region. I am amazed. You live in a unique country,” said Yanos in an interview with the Khabar TV channel.

Some glampings, campgrounds, visit centers and ethno auyls (ethno villages) will be established in Charyn National Park by the end of 2022.