NUR-SULTAN – Kazakhstan finished first out of 13 countries at the Aug.14 Rubik’s WCA Asian Championship 2022, followed by an Indian team that came in second and China that came in third, the press service of the championship reports. 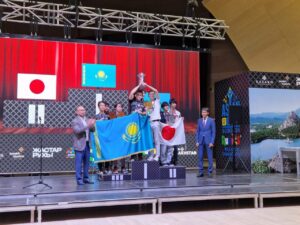 Japan, Mongolia and Kyrgyzstan rounded out the top five in the speedcubing championship.

The winners of the main discipline 3x3x3 and the Cup of Nations received a special cup in the shape of Baiterek monument, with each side representing six colors of the Rubik’s cube. Inside the Baiterek is a cube featuring the flags of all the Asian countries. All winners also received exclusive Rubik’s WCA Asian Championship 2022 medals and cash certificates. The total prize pool was $9,000.

Kazakh Minister of Culture and Sports Dauren Abayev, who personally attended the championship, was very impressed that Kazakhstan’s team scored best in 6-7 seconds.

“This sport fosters analytical thinking, teaches students how to make quick decisions, and is gaining popularity among youngsters. Congratulations to the winners once again!” said Abayev.

On the eve of the speedcubing championship, Danial Arstambek, a 15-year-old Kazakh speedcubing prodigy, presented his book about the great possibilities hidden in the recesses of the small Rubik’s cube.