NUR-SULTAN – This year marks three years since the establishment of the Aviation Administration of Kazakhstan (AAK) as an independent agency in charge of technical control and oversight over the safety and security of civil aviation. 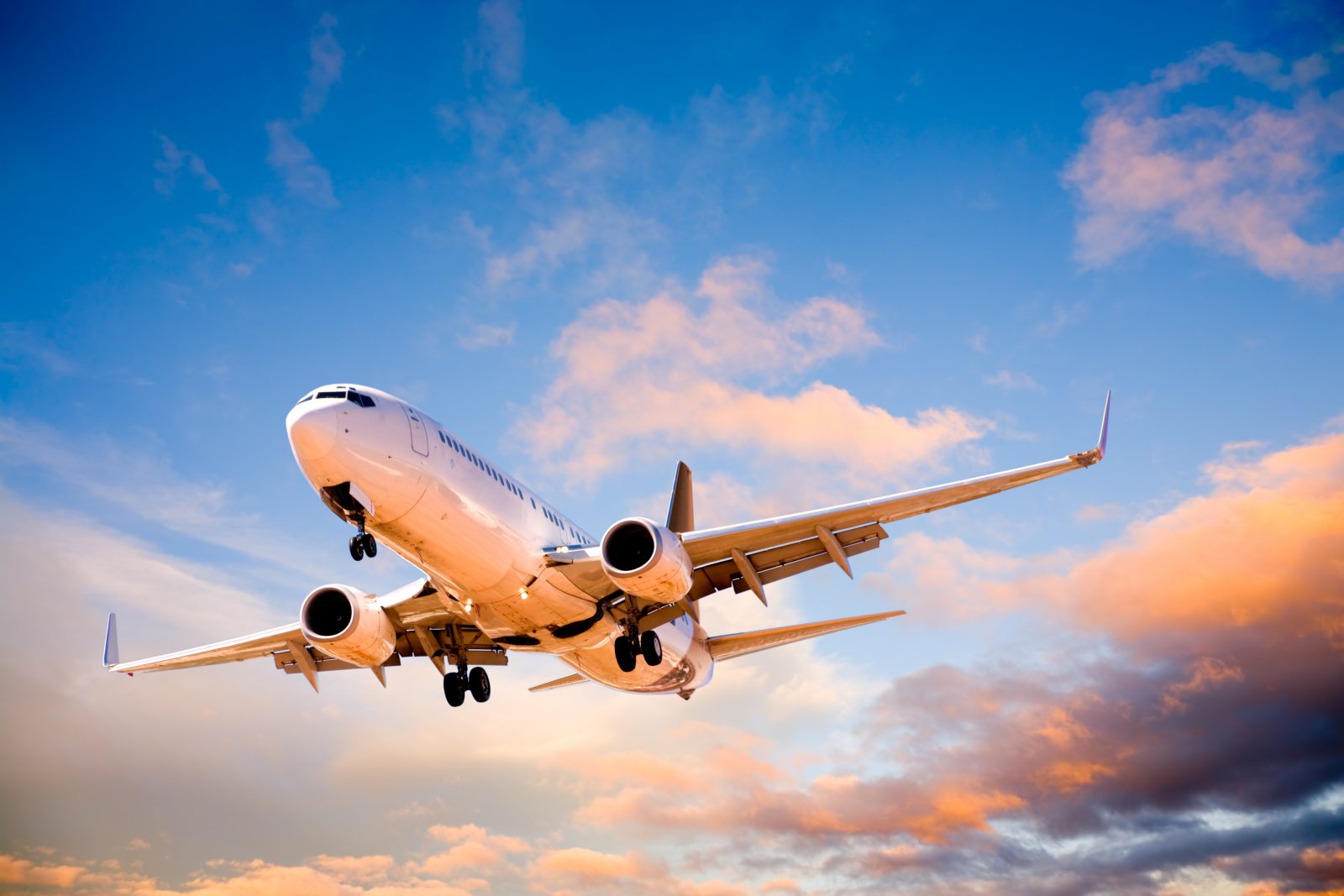 This year marks three years since the establishment of the Aviation Administration of Kazakhstan (AAK). Photo credit: gov.kz

The aviation administration implements measures to ensure safety in accordance with the best international practices. Kazakh citizens can now fly directly to 28 countries.

One of the main achievements of this year was the positive assessment carried out by the European Commission in the field of ensuring safety. As a result, Kazakh airlines were not included in the list of air carriers banned from flying to the European Union.

This decision was preceded by a huge amount of work, including the transition to the European model of regulation, the involvement of highly qualified foreign experts, the closure of seven airlines that did not comply with the safety standards, as well as the building of close cooperation with the European Union Aviation Safety Agency (EASA). 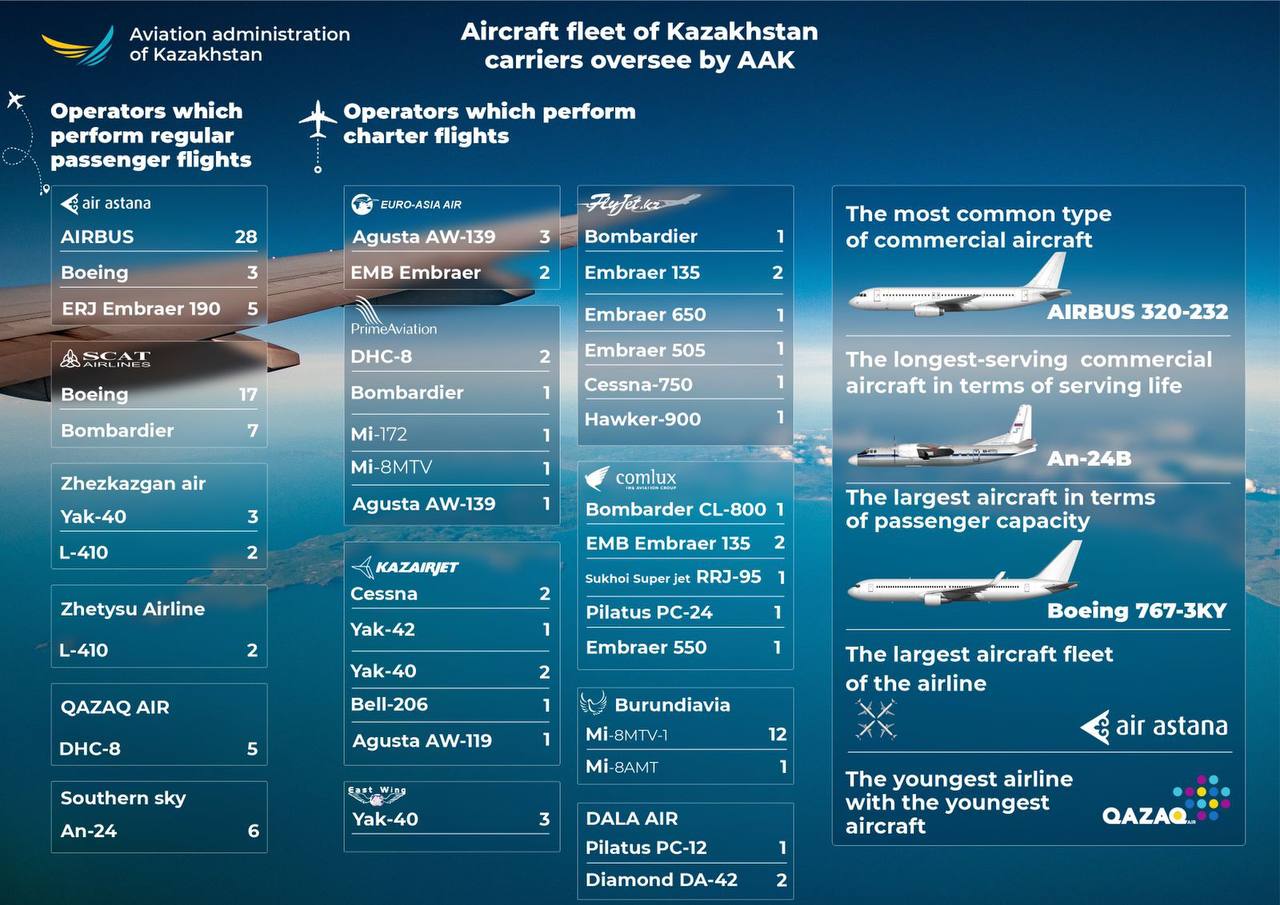 Since its establishment, the organization has passed a number of international inspections, including the ICAO Validation Mission (ICVM), a technical visit by experts from the European Commission, and a visit by experts from the U.S. Transportation Security Administration (TSA). Currently, there are 912 aircraft in the State Register, 75 of which perform regular passenger flights. The most common type of aircraft is the AIRBUS 320-232, the largest aircraft is the Boeing 767–3KY. Air Astana has the largest fleet, and the youngest airline with the youngest fleet is Qazaq Air.

Kazakhstan was the first CIS country to announce the 100 percent implementation of the Global Format for Presenting Data on the condition of the Runway Surface (GRF). This process was completed by the Aviation Administration of Kazakhstan in November 2021. 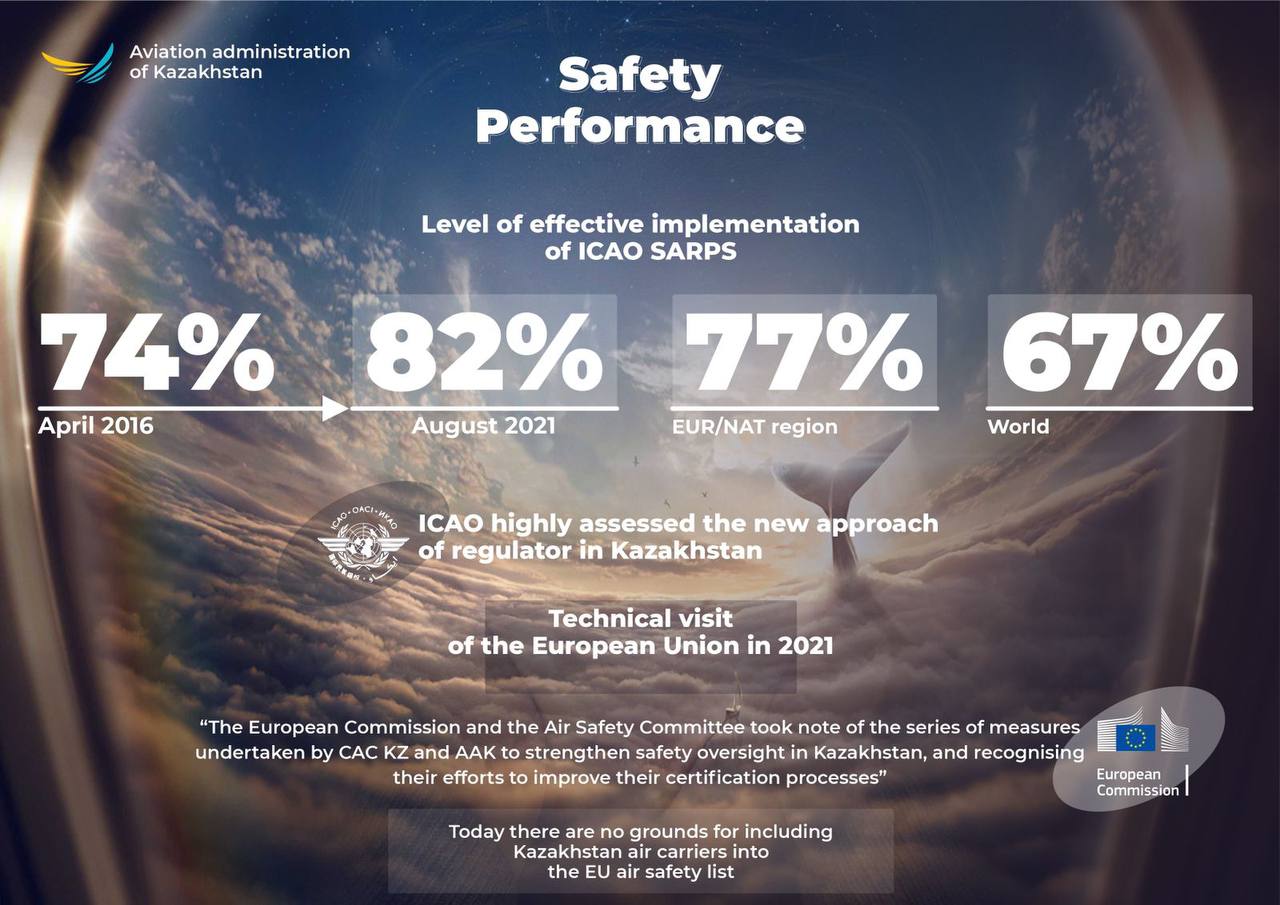 Currently, work is underway on the reconstruction of the passenger terminal at Shymkent airport. 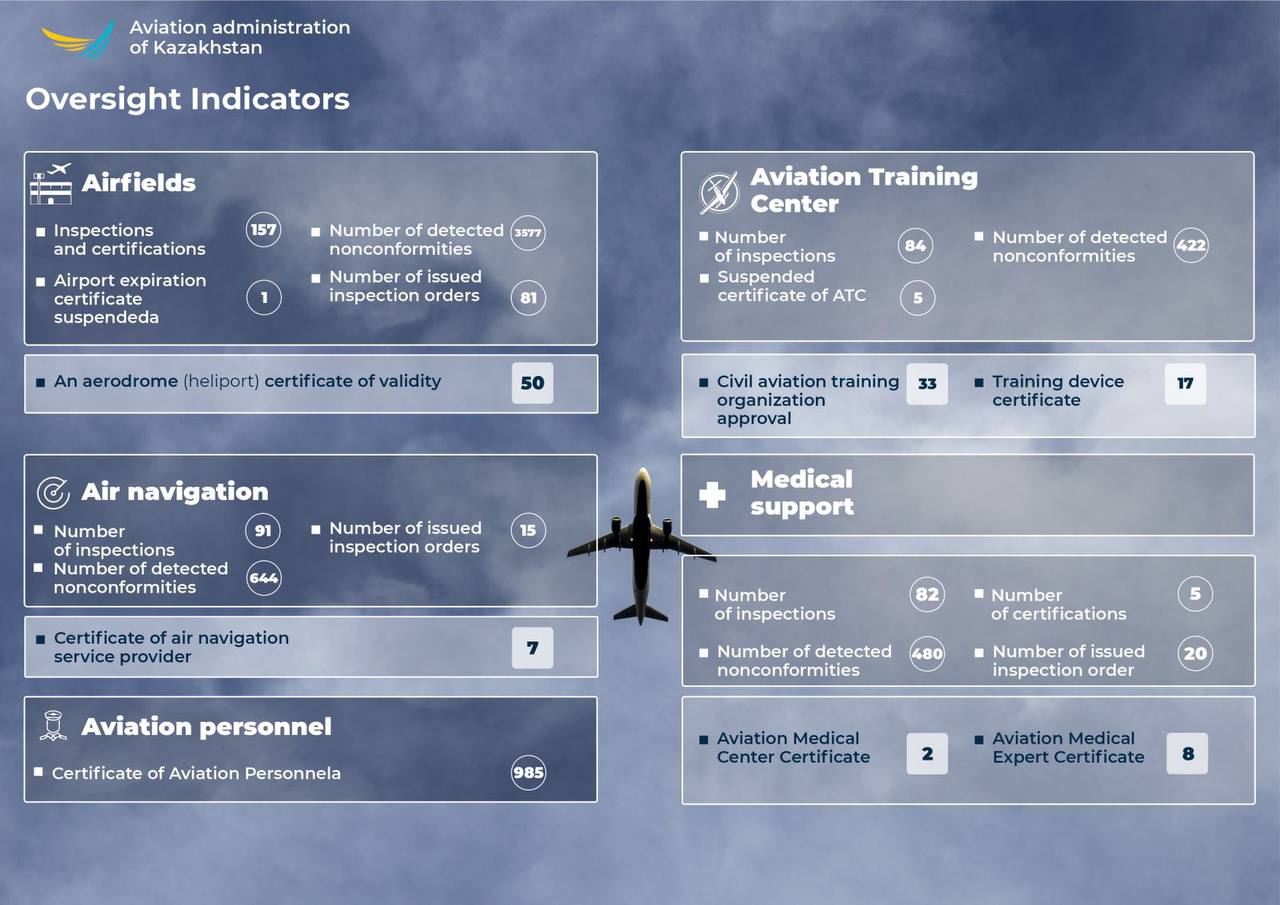 AAK specialists participate in international working groups, the results of which are included in the regional safety program. In addition, together with the Civil Aviation Committee, these groups participate in the development and improvement of regulatory legal acts and the introduction of international standards in the field of civil aviation.

The new amendments seek to increase the level of safety, reduce corruption risks and ensure a more objective verification of civil aviation, reduce the number of cases of undisciplined behavior of passengers on board aircraft, and increase the safety of unmanned aerial vehicles (UAVs) in the airspace of Kazakhstan. For the period from 2020 to the present, 262 UAVs have been registered. 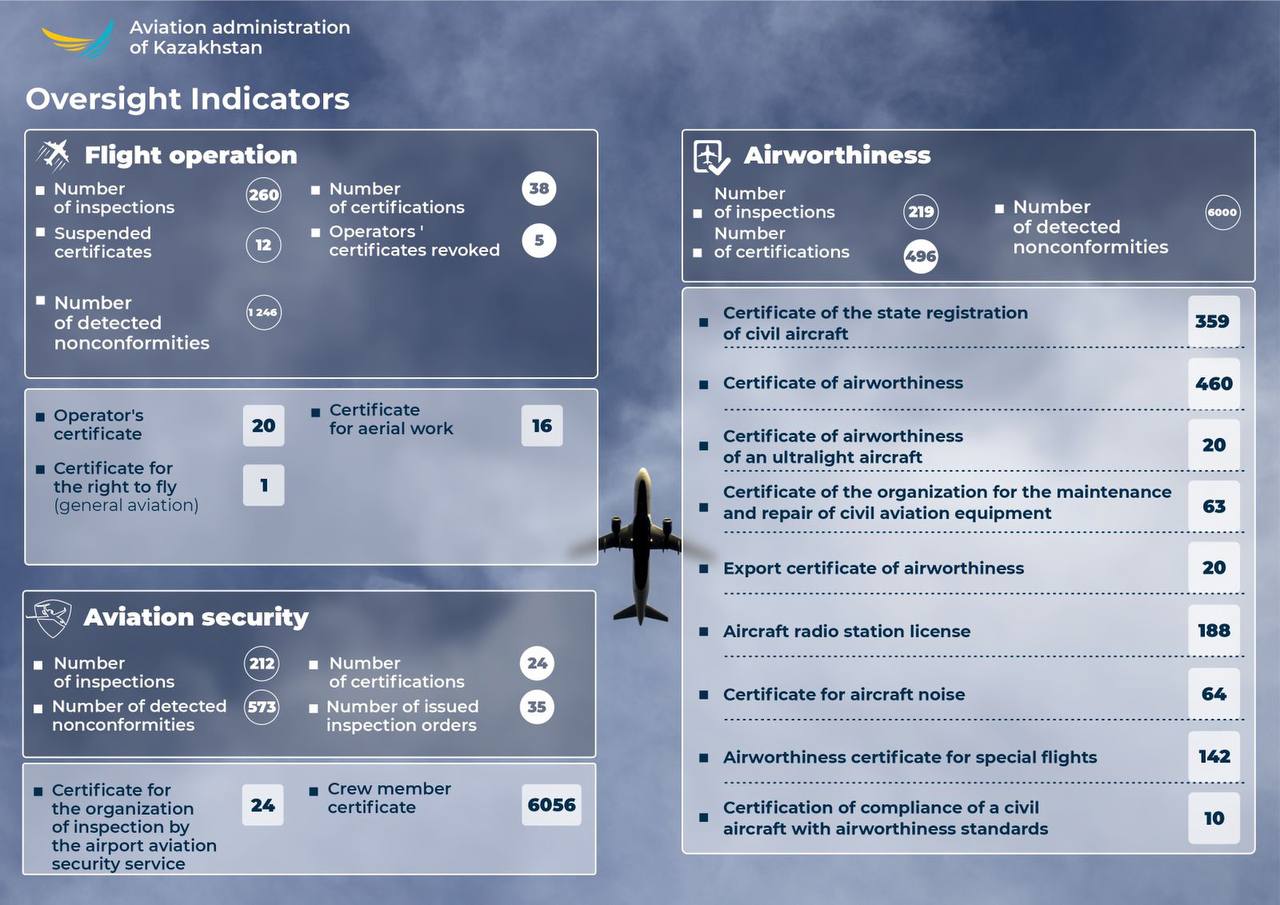 Strengthening international cooperation, the Aviation Administration of Kazakhstan signed an Agreement with the European Civil Aviation Conference (ECAC) on Kazakhstan’s participation as an observer, as well as on cooperation in the field of aviation safety, and accident investigation, flight safety, and ecology.

Since the beginning of this year, discussions have been underway to increase technical capacities in preparation for the upcoming International FAA (IASA) Flight Safety Assessment to allow direct flights between Kazakhstan and the United States.

The organization works with all aviation stakeholders at the political and policy-making levels, industry partners, economic development institutions, and academies to provide the highest level of effectiveness and efficiency of services, in order to build and promote the safest and the most secure environment for citizens and businesses.