NUR-SULTAN – The Ministry of Culture and Sports announced plans to launch the Neo-Nomad 2022 project on the eve of Capital Day, reported the press service of Kazakh Tourism. 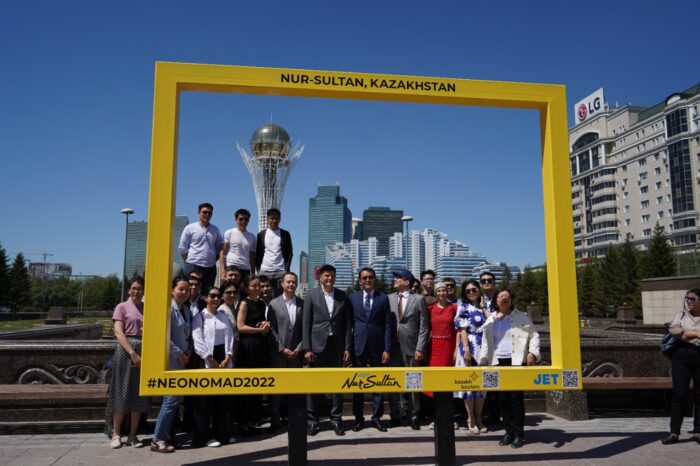 The presentation of the program was held in Nur-Sultan on June 4. Photo credit: Kazakh Tourism.

Tourists can now receive a special status of NeoNomad after visiting 20 popular tourist attractions in the country, said Vice Minister of Culture and Sports Yerzhan Yerkinbaev at the presentation of the project.

The initiative seeks to promote domestic tourism by taking photographs in the special photo frames and posting them on social media. The sights include the Baiterek monument in Nur-Sultan, Shymbulak ski resort in Almaty, Aisha Bibi mausoleum in the Zhambyl Region, and the Tanbalytas petroglyphs in the Almaty Region, the Berel museum-reserve in the East Kazakhstan Region and other monuments.

The campaign will be launched in September with the announcement of the results at the end of 2022.

It is also announced that a new tourist information center will be opened near the Abu Dhabi Plaza shopping mall in Nur-Sultan next year. “The center will provide key information for tourists. Services will be provided in four languages. Tourists can work on a computer here. We plan to open a store about the Kazakh culture and handicrafts,” said the Head of the department for investment and entrepreneurship development Yerzhan Baltayev.

Baltayev also said that a visitor who comes to Nur-Sultan for business purposes spends more than $1,000 for the entire period of his or her stay in the city. The average tourist spends about $200 a day.

“We conducted an analysis together with Master Card. We wanted to study the portrait of a tourist. Most of the tourists are under 40 and come from Russia and neighboring countries. They mainly come for business purposes,” he said.