The Global Gender Gap Index, a research study conducted by the World Economic Forum, uses markers such as economic participation and opportunity, educational attainment, health and survival, and political empowerment to evaluate the state of gender equality in a country.

This year, the Global Gender Gap Index benchmarked 146 countries out of which 102 countries have been represented in every edition of the index since 2006.

Kazakhstan leads in the educational attainment subindex. In fact, it has closed 100 percent of the gender gap in this sector along with Armenia and Georgia among the Central Asian countries. 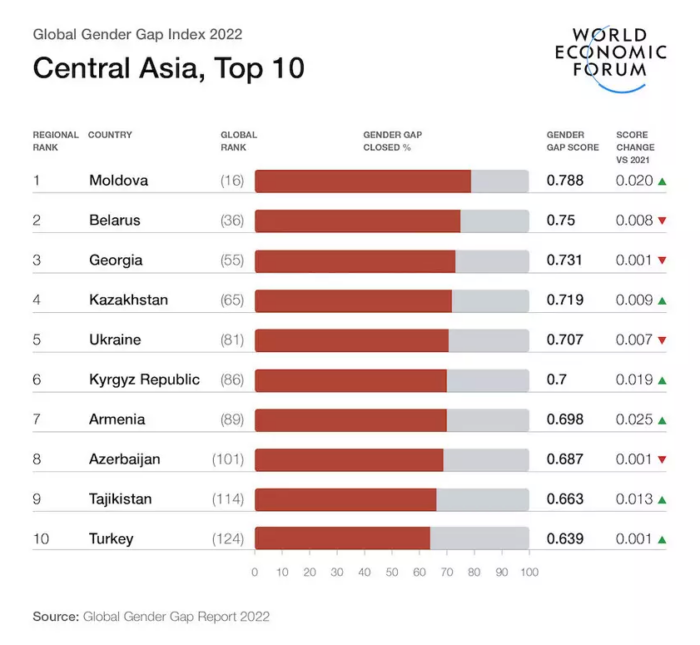 On the economic front, Kazakhstan has achieved 75.6 percent parity, ranking 29th on the global list. Progress has been made in wage equality for similar work, estimated earned income, and an increase in the share of women in senior positions (legislators, senior officials, and managers).

Kazakhstan has also improved its ranking in the health and survival subindex from 55th to 44th place compared to last year.

In the political empowerment sector, Kazakhstan continues to have a large gender gap, ranking 103rd. While the number of women in ministerial positions and in parliament continues to rise, the progress is still marginal, according to the report.

The top three places in the global gender gap survey are occupied by Nordic countries with Iceland first, Finland second, and Norway third.

In 2022, the global gender gap has been closed by 68.1 percent. Based on the current trajectory, women will have to wait another 132 years to achieve overall parity with men.