NUR-SULTAN – Kazakh Minister of National Economy Alibek Kuantyrov presented the second Voluntary National Review (VNR) on the implementation of the Sustainable Development Goals (SDGs) at the United Nations High-Level Political Forum on Sustainable Development during his visit to UN headquarters in New York on July 14, reported the ministry’s press service. 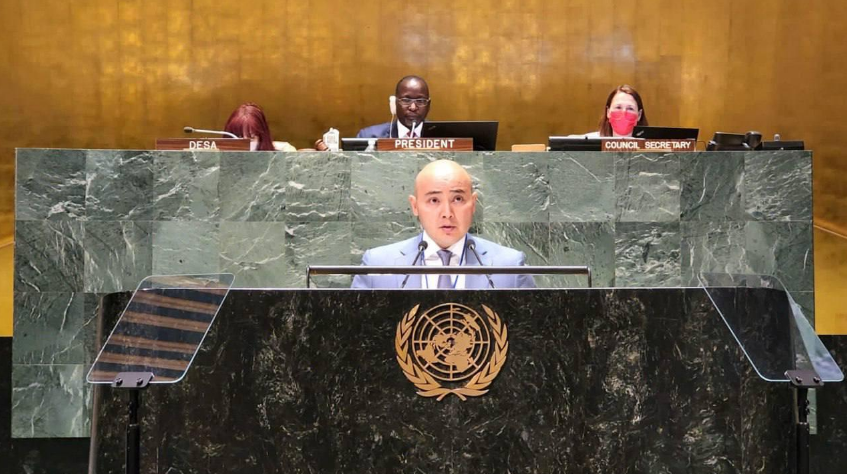 The second VNR reflects Kazakhstan’s progress in implementing the SDGs in the three years since the country presented the first VNR in 2019.

In his address to the forum, the minister said Kazakhstan pays attention to the formation and development of the institutional framework for the implementation of the SDGs.

“When implementing the SDGs, we are guided by one of the important principles – leave no one behind. It is important that everyone is heard. Representatives of state authorities, civil society, public associations, international organizations, as well as youth and other groups of the population are involved in the discussion and determination of priority SDGs for the country,” said Kuantyrov.

As a result of a national consultation held in 17 regions of the country with more than 2,500 representatives of government agencies, civil society, business, media, youth and women’s organizations, poverty eradication, good health and well-being, clean water and sanitation, and decent work and economic growth were identified as priority SDGs for Kazakhstan for the upcoming years.

Kuantyrov reported a systematic recovery of Kazakhstan’s economy in 2021 that reached 4.1 percent growth despite still being below the pre-pandemic level.

“In the first six months of 2022, the inflow of investments in fixed assets increased by 2.6 percent, and the inflow of foreign direct investment rose by 54.1 percent compared to the same period last year. Thus, we managed to keep the unemployment rate at 4.9 percent. International reserves amounted to US$86.6 billion,” said the minister.

According to United Nations Development Programme (UNDP) Representative in Kazakhstan Yakup Beris, the COVID-19 pandemic put a strain on the world’s economies.

“The negative consequences of COVID-19 are a difficult time for the economies of all countries, as well as for other spheres of life across the planet. Such analysis allows countries to pause and, taking into account government programs and strategies, make the necessary decisions and take certain steps to build a more sustainable future,” he said.

According to Kuantyrov, Kazakhstan also pays attention to green initiatives.

“The strategy for achieving carbon neutrality until 2060 is being developed, which will significantly reduce the harmful impact on the environment,” said the minister.

Kazakhstan set the goal to reach a 45.7 percent share of non-primary exports by 2025, increase labor productivity by 20.6 percent and expand the use of alternative and renewable energy sources to 50 percent by 2050 by gradually reducing coal consumption.

During a meeting with Under Secretary-General and Associate Administrator of UNDP Usha Rao-Monari, Kuantyrov expressed Kazakhstan’s support for the new UNDP Country Program for 2021-2025 years.

Two sides discussed ways to strengthen their cooperation. In particular, according to Kuantyrov, the UNDP has the potential to help develop Kazakhstan’s three new regions – Abai, Zhetisu and Ulytau – recently established by President Kassym-Jomart Tokayev during his address to the nation.

Kuantyrov spoke about state policies to protect the rights and interests of families, women, and children.

According to the minister, there are around 22,500 non-governmental organizations (NGOs) in Kazakhstan, including more than 500 involved in family and gender policies that make an important contribution to the empowerment of women. More than 8,000 NGOs are headed by women. The number of women entrepreneurs in the country’s regions is also steadily rising.

Bhatia commended Kazakhstan’s use of best international practices in the field of gender equality and the promotion of women’s initiatives.

Speaking at a side event at the UN on the localization of SDGs, Kuantyrov expressed the current emphasis on child welfare.

“Every third citizen of our country is a child. We can firmly assert that children are the direct and indirect beneficiaries of all state support measures. In his address, the President noted that care for children should be at the center of state policy. After all, today’s well-being of children is a reliable guarantee of the country’s successful future,” said Kuantyrov.