in Conference on Interaction and Confidence Building Measures in Asia, Op-Ed on 22 July 2022

On the backdrop of armed conflicts proliferating around the globe since the turn of the century, there is a more urgent need for enhanced security cooperation and diplomacy efforts among Asian countries both bilaterally and multilaterally. Fostering transparency and building confidence in military and security spheres between countries and international organizations is crucial to help de-escalate and preempt future instances of such conflicts. 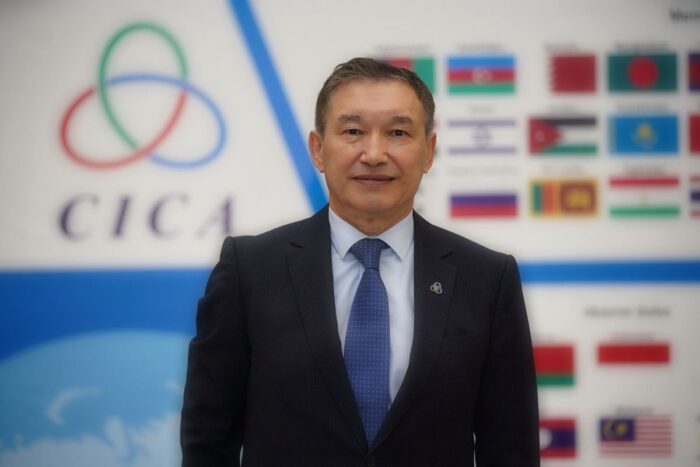 With the aim to advance security diplomacy and cooperation among the countries of Asia, Kazakhstan hosted the annual Seminar on the Development of the Military-Political Dimension of the Conference on Interaction and Confidence Building Measures in Asia (CICA) on July 13, 2022 in Nur-Sultan.

The seminar was co-hosted by the Ministries of Defense and Foreign Affairs of the Republic of Kazakhstan and held in an offline format in Nur-Sultan for the first time since the outbreak of the pandemic. Representatives and high-level delegates from 15 of the 27 CICA member states took part in meaningful discussions concerning issues of security, conflict prevention, de-escalation and increased cooperation between Member States in the military-political dimension. The seminar was held on the eve of the 30th anniversary of the CICA.

Member states of CICA have developed ten specific confidence-building measures under the Military-Political Dimension within the CICA Catalogue of Confidence-Building Measures. This catalog is a key document of CICA which reflects the collective views of member states as well as multilateral cooperative approaches to ensure long-term stability on the Asian continent. These measures may be implemented on a step-by-step and voluntary basis by member states.

Four out of these ten measures have entered the phase of implementation following the decision of the Senior Official Committee of CICA on June 28, 2013. In order to achieve effective results with CICA member state military-political cooperation, Kazakhstan has been displaying initiative by organizing and hosting international events and seminars in this field since 2012.

As of now, the total population of CICA member states is around four billion, almost 90 percent of the population of the Asian continent. According to United Nations (UN) sources, out of this colossal number, ten million people are active military personnel prepared for deployment. There is no question that more effective and continuous cooperation between member states within the various dimensions of confidence-building measures of CICA will be instrumental for the improvement of social, economic and military-political situations throughout the entire continent.

The Ministry of Defense of Kazakhstan, being the responsible state body for the development of this dimension of CICA, expressed its readiness to implement further measures to develop the military-political dimension of CICA during the most recent seminar. Representatives of the Ministry avidly advocated for more CICA member states to start implementing policies from the updated CICA catalog of confidence-building measures in the military-political dimension. Through concrete examples and explanations of Kazakhstan’s implementation of CICA policies of transparency, information exchange regarding military leadership, initiatives and educational programs, the Ministry urged other member states to follow suit.

Over the years of Kazakhstan hosting such events, interest in the development of the military-political dimension of the CICA member states has been increasing year by year. There has also been a qualitative rise in representation at such meetings, as the number of senior-level participants taking part in these events such as generals and ambassadors of various states grew. This highlights the growing importance of further development of the military-political dimension. During the most recent event, international participants of the seminar had the opportunity to visit the enterprises of the military-industrial complex of Kazakhstan in the city of Nur-Sultan as well as the Peacekeeping Training Center in Almaty.

A number of the most topical issues that are currently being faced today on the Asian continent were brought up in the seminar. Some of these topics were terrorism, in all its forms, militant manifestations of separatism and extremism, the proliferation of weapons of mass destruction and their means of delivery, drug trafficking, regional conflicts and disputes and illegal trade in light and small arms weapons. The possibilities of tackling these issues through CICA member state cooperation in the military-political field should not be underestimated.

To date, CICA is a very real influencing factor within international relations in Asia, which, along with other regional associations (Shanghai Cooperation Organization, Eurasian Economic Union), creates a solid foundation for stability and interaction in the region. CICA is a forum where Asian countries can discuss the prospects for cooperation and develop appropriate multilateral approaches to strengthening such cooperation in accordance with the purposes and principles of the Charter of the United Nations and the Almaty Act.

The Military-Political Dimension of CICA, despite its partial implementation among member states of CICA, is a central aspect of cooperation which is being fully supported and promoted by Kazakhstan as was shown by the most recent seminar.
On its 30th anniversary year, a paramount goal for CICA is to undergo a sustainable transformation into a full-fledged international organization at the upcoming Sixth CICA Summit in October 2022 in Nur-Sultan and achieve new heights in all areas of international cooperation to make the voice of the Asian continent heard on a global level.