By Saniya Bulatkulova in International on 5 July 2022

NUR-SULTAN – Kazakhstan’s national robotics team won two British off-season olympiads run by FIRST Tech Challenge United Kingdom and Ireland, reported the Kazakh Ministry of Education. The team has set an absolute record as they won 19 out of 20 games and received three awards from the jury. 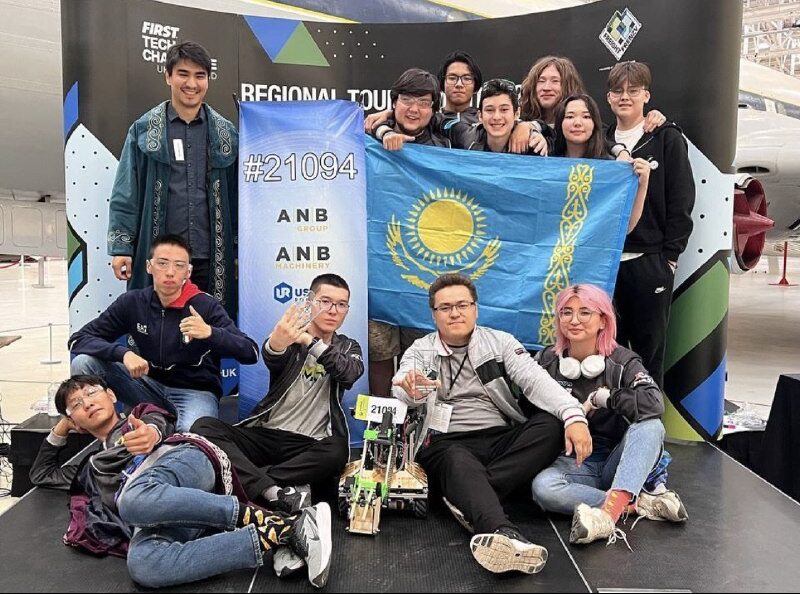 The national team of Kazakhstan in robotics at the competition in UK. Photo credit: FIRST Robotics Kazakhstan

The first competition titled FIRST Tech Challenge – West Midlands took place on June 28 in Wolverhampton. The national team, which consists of 12 students aged 15-17, won 10 out of 10 games and the Judges Award, which is given to the team with the best sports professionalism.

The second competition, FIRST Tech Challenge – South East was held on July 1 in London. This time, Kazakh schoolchildren won 9 out of 10 games and ranked first. The students also received two awards from the jury – the Judges Award and the Control Award.

Overall, young inventors spent approximately a month assembling their robots and working on their projects in the laboratories of their schools. They modeled robot parts and implemented their projects on 3D printers and laser machines.

“With robotics, we are able to explore the world, travel, and meet well-trained peers from other countries. This trip to the UK gave us confidence in our abilities. We fought for the honor of the country with the strongest teams of England and Northern Cyprus and helped our rivals in between games. It was exciting for us as we participated in this type of competition only for the second time, but performed better than the teams that have been training for decades,” said one of the team members Nurasyl Beisenbai.

According to Robotics Development Fund in Kazakhstan and Central Asia STEM Robotics Co-founder Nurdaulet Dosmagambet, FIRST Tech Challenge UK and Ireland has a fund with an $80 million scholarship, so the winners of their championships have a chance to study at the world’s leading universities for free, including Massachusetts Institute of Technology (MIT), Yale University and other prestigious educational organizations.

Every year FIRST holds various competitions for children from 6 to 18 years old. Each competition differs in the theme and complexity of the tasks, while its tasks are related to real-world challenges: industrial automation, mining, recycling, space exploration, and biomedicine among other important topics.