NUR-SULTAN – The New York Times published a review of the Kazakh crime film “A Dark, Dark Man” directed by Adilkhan Yerzhanov on July 19. 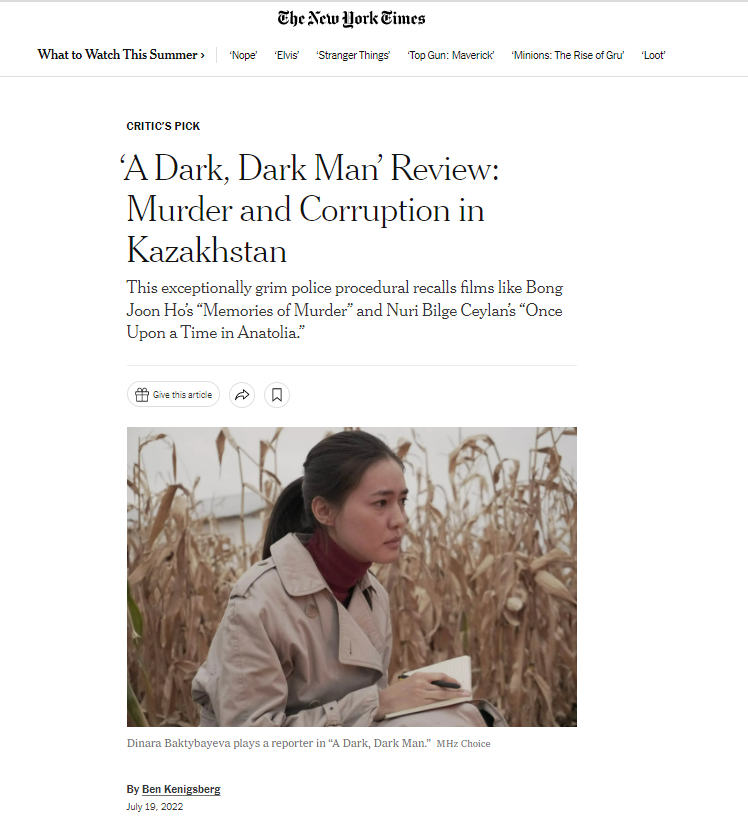 The review’s author Ben Kenigsberg is film critic and journalist.

According to a critic, this police procedural is “clearly designed for big-screen immersion.” Its methods and themes also recall such acclaimed art-house titles as Bruno Dumont’s “Humanité,” Bong Joon Ho’s “Memories of Murder” and Nuri Bilge Ceylan’s “Once Upon a Time in Anatolia,” the review reads.

Premiered in 2019, the film won the nomination for Best Director at the 2019 Asia Pacific Screen Awards and took part in the competition program of the 67th San Sebastian International Film Festival.

The film tells the story of the detective antihero Bekzat (Daniyar Alshinov), who wants to close the murder case of an orphan boy. Poukuar (Teoman Khos), a naive local, is coerced into providing evidence that will be used to frame him for the murder. The plan fails when journalist Ariana (Dinara Baktybayeva) intervenes and turns up to accompany Bekzat on the real investigation.

“The mystery aspect is handled obliquely. The film is more of a mood piece, and much of its pitch-black humor derives from the contrast between the barren landscape and the sheer number of horrors it contains. … Only the closing moments seem less nervy,” the review reads.